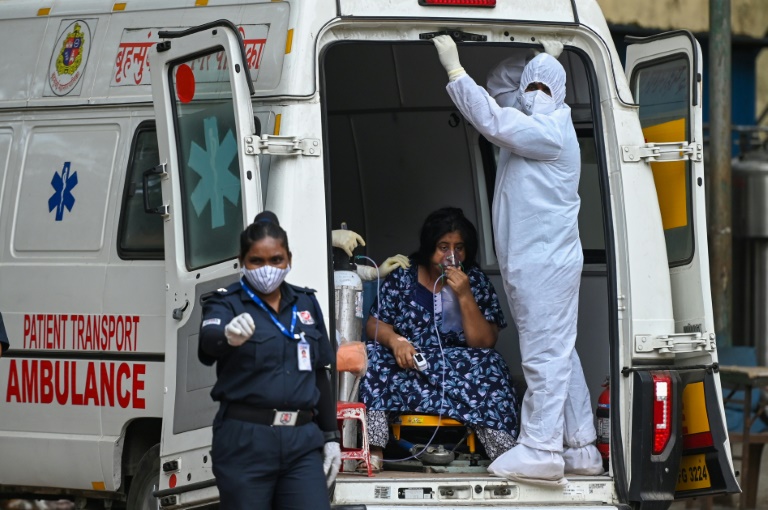 A health worker wearing Personal Protective Equipment gear stands with a patient getting transferred to an intensive care unit in Mumbai. AFP/Punit Paranjpe

MUMBAI - Delhi hospitals issued desperate appeals for oxygen on Friday and 13 COVID-19 patients died in a fire, as India's healthcare system buckles under a new wave of infections.

The surge in cases, blamed on a new virus variant and the government allowing "super spreader" public events to go ahead, saw another 330,000 new infections and 2,000 deaths reported in the past 24 hours.

The latest in a string of fires at hospitals broke out on the outskirts of Mumbai early Friday morning, a local official told AFP. It has since been put out and the cause was being investigated.

"There were 17 patients inside when a fire broke out in the ICU of Vijay Vallabh Hospital, out of which 13 died and four have been shifted to other facilities," fire department official Morrison Khavari said.

Earlier this week, 22 COVID-19 patients died at another hospital in the same state of Maharashtra when the oxygen supply to their ventilators was disrupted by a leak.

India has recorded more than four million infections this month, dashing hopes at the start of the year that it may have seen the worst of the pandemic.

Many parts of the country have now tightened restrictions, with the capital in lockdown and all non-essential services banned in Maharashtra. The northern state of Uttar Pradesh, home to 240 million people, goes into a shutdown this weekend.

Medical oxygen tanker trunks have been doing supply runs around the clock in a number of states and air force transport planes have started airlifting big oxygen tanks around the country.

The first "Oxygen Express" train left the southern industrial hub of Vizag on Thursday headed for Maharashtra with trucks carrying supplies on board.

India has now recorded more than 16 million cases and 187,000 deaths from the coronavirus. Per capita numbers are however much lower than in many other countries.