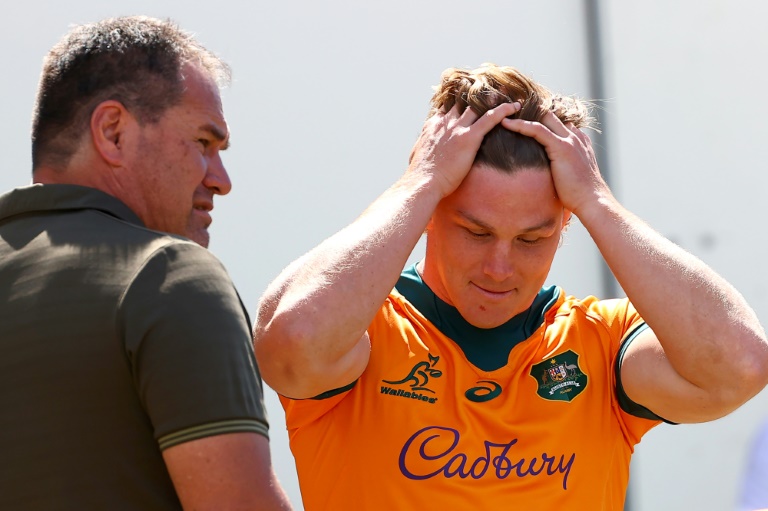 MELBOURNE - The Wallabies might have won three in a row for the first time since 2017 but "grumpy" coach Dave Rennie wants more ruthlessness, complaining they were not clinical enough against Argentina.

Buoyed by back-to-back upsets of world champions South Africa, Australia put Los Pumas to the sword 27-8 in Townsville on Saturday evening, but they lost focus early in the second half to give Mario Ledesma's men a glimmer of hope.

Rennie, who has been on a rebuilding mission since taking over last year, said he had "mixed emotions" about their performance.

"We're obviously happy to win and we worked really hard in the first half to put ourselves in a strong position," the New Zealander said after the game.

"Probably a bit of frustration from us that we had a lot of opportunities late to put them out of the game, and didn't do the obvious which was throw one more pass.

"We sustained a lot of pressure 20 minutes after half-time. So mixed emotions, we've got to be better."

Despite Rennie striving for more improvement, he will be pleased with their first-half performance, when Australia forced the Pumas to repel waves of attack.

Reece Hodge and Samu Kerevi both scored tries that saw them take a 17-3 lead into the break.

"Last week (against South Africa) we were really clinical. Against Argentina not as clinical. We've got to be better there... It gives us a chance to be grumpy through the review after a win," he said.

"Against good sides like Argentina you've got to put them out of the contest when you have the chance."

The two sides meet again next week on Queensland's Gold Coast in the final Rugby Championship round, with skipper Michael Hooper looking to inflict more pain on a team that has lost five out of five.

"We drew these games (against Argentina) last year, so really pleasing to take a step forward," said Hooper.

"We're sticking to the script, mostly. There's improvement but I think we're creating some belief around how we want to play and what Wallaby rugby looks like."

The last time Australia won three in a row was a four-game streak in 2017 before they crashed against England, but Hooper said "we don't want to get too far ahead of ourselves".

"We've had a couple of decent performances, we'll enjoy this one. But there's another tough game coming up, there's no easy Test matches in the world anymore."