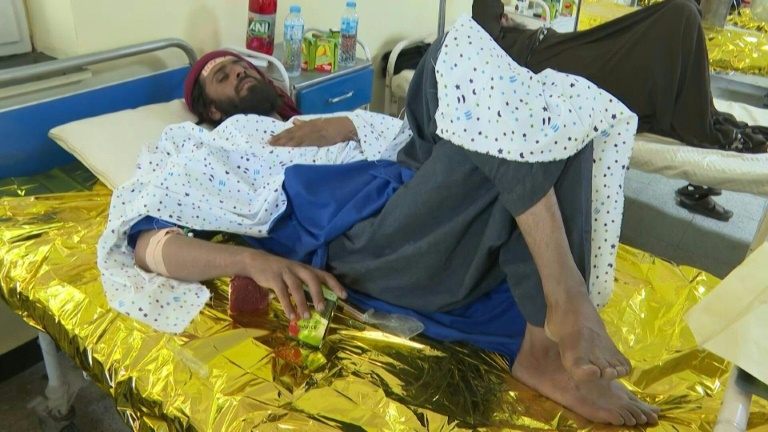 "Getting information from the ground is very difficult because of bad networks," Mohammad Amin Huzaifa, head of information for badly hit Paktika province, told AFP Thursday, adding there was no immediate update to the death toll.

"The area has been affected by floods because of heavy rains last night... it is also difficult to access the affected sites."

The disaster poses a huge logistical challenge for Afghanistan's new Taliban government, which has isolated itself from much of the world by introducing hardline Islamist rule that subjugates women and girls. 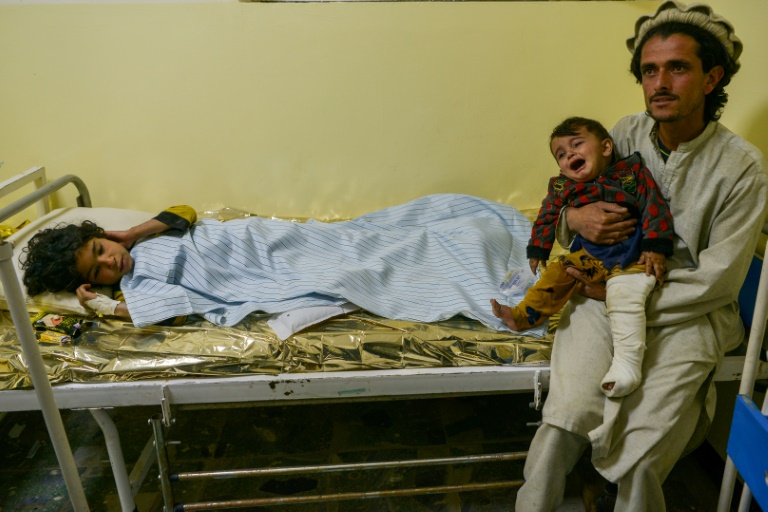 An Afghan man with his injured children at a hospital in Sharan, Paktika province, following the eartrhquake

The aid-dependent country saw the bulk of its foreign assistance cut off in the wake of the Taliban takeover last August, and even before the earthquake the United Nations warned of a humanitarian crisis that threatened the entire population. 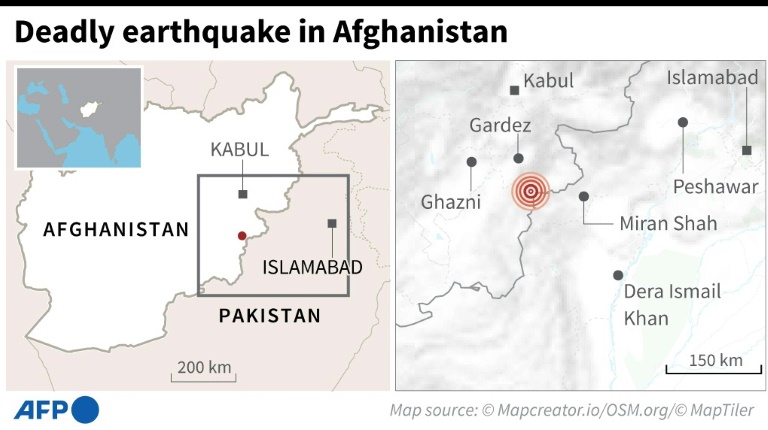 The earthquake struck areas that were already suffering the effects of heavy rain, causing rockfalls and mudslides that wiped out hamlets perched precariously on mountain slopes.

The UN humanitarian coordinator for Afghanistan, Ramiz Alakbarov, told reporters nearly 2,000 homes were likely destroyed -- a huge number in an area where the average household size is more than 20 people.

"Seven in one room, five in the other room, four in another, and three in another have been killed in my family," Bibi Hawa told AFP from a hospital bed in the Paktika capital.

"I can't talk any more, my heart is getting weak."

Hospital director Mohammad Yahya Wiar said they were doing their best to treat everyone.

"Our country is poor and lacks resources," he told AFP. "This is a humanitarian crisis. It is like a tsunami."

Footage released by the Taliban showed people in one village digging a long trench to bury the dead, who by Islamic tradition must be laid to rest facing Mecca.

Even before the Taliban takeover, Afghanistan's emergency response teams were stretched to deal with the natural disasters that frequently strike the country.

But with only a handful of airworthy planes and helicopters left since they returned to power, any immediate response to the latest catastrophe is further limited.

"The government is working within its capabilities," tweeted Anas Haqqani, a senior Taliban official.

"We hope that the International Community & aid agencies will also help our people in this dire situation."

The United States, whose troops helped topple the initial Taliban regime and remained in Afghanistan for two decades until Washington pulled them out last year, was "deeply saddened" by the earthquake, the White House said.

"President Biden is monitoring developments and has directed USAID (US Agency for International Development) and other federal government partners to assess US response options to help those most affected," National Security Advisor Jake Sullivan said in a statement.

The European Union was also quick to offer assistance.

Tomas Niklasson, EU special envoy for Afghanistan, tweeted: "The EU is monitoring the situation and stands ready to coordinate and provide EU emergency assistance to people and communities affected."

Afghanistan is frequently hit by earthquakes, especially in the Hindu Kush mountain range, which lies near the junction of the Eurasian and Indian tectonic plates.

Scores of people were killed in January when two quakes struck the western province of Badghis.

In 2015, more than 380 people were killed in Pakistan and Afghanistan when a 7.5-magnitude earthquake ripped across the two countries.

Afghanistan's deadliest recent earthquake killed 5,000 in May 1998 in the northeastern provinces of Takhar and Badakhshan.

"I express my closeness with the injured and those who were affected," the 85-year-old pontiff said concluding his weekly audience.

By Emmanuel Peuchot And Abdullah Hasrat