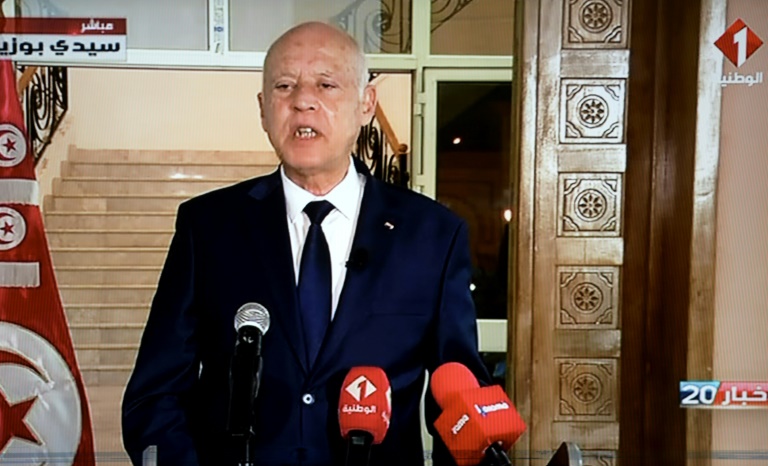 TUNIS - Around 20 global and Tunisian human rights groups on Saturday condemned a "power grab" by Tunisia's president and warned of a slide back towards authoritarianism.

They "strongly denounce the decisions taken unilaterally by President Kais Saied, reaffirm their unwavering attachment to democratic principles and condemn the seizure of power and the lack of any form of safeguards."

Their warning followed Saied's announcement on Wednesday of decrees that strengthen the powers of his office at the expense of those of the prime minister and parliament, in the only democracy to have emerged from the Arab spring uprisings of a decade ago.

Saied's action is "implicitly abrogating the constitutional order in... a first step towards authoritarianism," the rights groups said.

The new measures came almost two months after Saied sacked the government of Hichem Mechichi and suspended parliament, presenting himself as the ultimate interpreter of the constitution.

Mechichi's government was supported by the Islamist-inspired Ennahda party, the largest in Tunisia's deeply fragmented legislature.

Although Saied's July measures enjoyed significant public support, civil society groups have been warning of a drift away from democracy.

The speaker of Tunisia's parliament Rached Ghannouchi on Thursday called for "peaceful struggle" against a return to "absolute one-man rule".

In their statement, the rights groups recognised "the limits of the current political system" established by the 2014 constitution but said any reform must be done while respecting "the separation of powers and in full guarantee of fundamental freedoms and human rights."

Such change cannot be "dictated unilaterally by the presidential power," the groups said.

Saied will now rule and pass laws by decree, without the need for a vote in parliament, which remains suspended.

"The constitution is no longer the source of laws, and no recourse will be possible against the presidential decrees," the statement said.