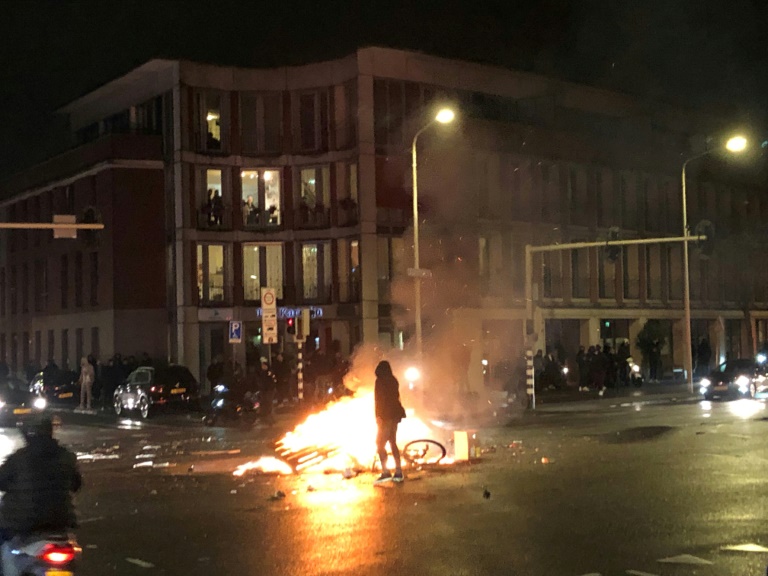 THE HAGUE - The Netherlands will tighten its partial Covid lockdown on Friday with the early closure of bars, restaurants and shops, as police prepare for possible new riots against the curbs.

Schools will however stay open under the measures to be unveiled by Prime Minister Mark Rutte at a press conference at 1800 GMT, Dutch media reported.

Hospitals will also cancel planned operations to free up beds as cases surge to record levels of over 20,000 infections a day, despite the fact 85 percent of Dutch adults are vaccinated, the health minister said.

But new restrictions risk inflaming a tense situation after four nights of unrest across the country, particularly in the port city of Rotterdam where five rioters were shot by police.

"We are keeping our eyes and ears open and we are prepared," Rotterdam police spokesman Gijs van Nimwegen told AFP.

"We hope things stay calm in Rotterdam and the rest of the Netherlands."

The Dutch government decided at a meeting on Friday that non-essential shops, bars, cafes, restaurants, cinemas and restaurants must close from five pm to five am, as of Sunday, public broadcaster NOS reported.

Non-essential shops had previously been allowed to stay open until six pm, and catering establishments until eight pm.

Schools will stay open, despite the fact that the largest rise in infections is among children, but pupils from age 10 must wear masks, NOS said citing cabinet sources.

Health experts of the Dutch Outbreak Management Team reportedly believed a new closure of schools, as was the case at the start of the pandemic, would be harmful to children.

But some experts have called for schools to be closed to halt the youth-driven tide of infections that is overwhelming  hospitals.

Dutch authorities recorded 21,350 new infections on Friday, slightly below the seven-day average of 22,258.

Dutch people "should brace themselves for a harsh winter", de Jonge added.

The Netherlands lifted most coronavirus restrictions in September but was forced to reintroduce them in October, sparking angry protests.

Demonstrations have erupted in The Hague during the prime minister's last two Covid press conferences, with police using water cannon to disperse demonstrators.

Riots broke out in Rotterdam last Friday after a Covid protest, and the trouble spread to The Hague on Saturday and to other cities including Groningen in the north on Sunday and Monday.

At least 173 people were arrested nationwide.

The mayor of Nijmegen near the German border has meanwhile banned a demonstration planned for Sunday against the coronavirus measures "because of a serious risk of disruption of public order".