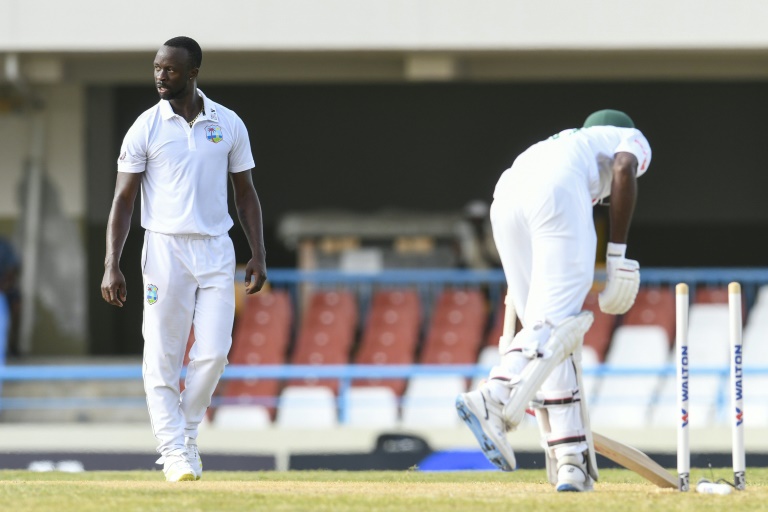 ST LUCIA - When Kemar Roach marks out his run in the second Test against Bangladesh, which starts at the Daren Sammy Stadium on Friday, he will do so knowing that he is just one wicket short of joining a very select group of West Indian bowlers.

The 33-year-old Barbadian pace bowler goes into the Test with 249 wickets to his name, the same as a legend of the 1970s and 80s, Michael Holding.

After returning match figures of seven for 74 to fire West Indies to a seven-wicket win in the first Test in Antigua, Roach admitted he was targeting 300 Test wickets.

"I am always one for stats," he told the press after the match.

"It's good to be up there with all the fantastic people in West Indies cricket."

Roach and his teammates will take immense confidence from their victory in the first Test which followed a 1-0 series win at home against England in March.

Another win would not just secure the series but lift the West Indies above Pakistan to sixth in the World Test Championship.

In Antigua, Roach had good back-up from Jayden Seales, who took three for 33 in the first innings, and Alzarri Joseph who picked up three wickets in each innings.

Skipper Kraigg Brathwaite set the tone for the batsmen with 94 in the first innings although a collapse from 224 for four to 265 all out suggests there is also some work to be done.

Bangladesh's batting, on the other hand, was feeble with the top-order, especially Najmul Hossain and Mominul Haque, completely out of form.

Their first innings 103 in Antigua, which included six ducks, was the fifth time in 12 completed innings this year that they have been bowled out for fewer than 200.

In spite of a more respectable 245 in the second innings, it meant they were on the back foot for the entire game.