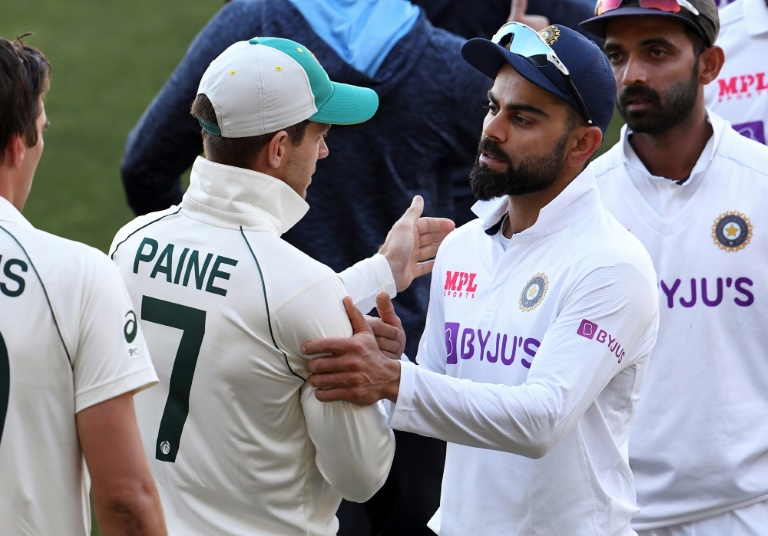 India skipper Virat Kohli said playing a pink-ball Test match is 'much more challenging', on the eve of the third Test clash against England. AFP/William West

AHMEDABAD - England captain Joe Root and India skipper Virat Kohli have both warned of the challenges of playing during the twilight zone in day-night Tests -- when batting collapses can happen -- ahead of their third Test clash starting Wednesday.

The match will be the first time that India and England -- level at 1-1 in the four-match series -- face each other in a day-night encounter.

"It's much more challenging to play with the pink ball regardless of what pitch you are playing on," Kohli said on the eve of the match in the world's biggest cricket stadium in Ahmedabad.

"And especially in the evening, if, as a batting team, you are starting your innings under lights, then that one-and-a-half-hour is challenging," Kohli told reporters.

"When it starts to get dark, especially during that twilight period, it gets very tricky. Light changes, it's difficult to sight the ball and under lights is like playing the first session in the morning in a normal Test match. The ball tends to swing a lot."

Both teams have had painful experiences of pink-ball cricket. India were bowled out for 36 by Australia in Adelaide in December and New Zealand skittled England in Auckland for 58 in 2018.

"Both are bizarre experiences for two quality sides," Kohli said. "Barring that 45 minutes of bad cricket (in Adelaide) we dominated the Test match. We are very confident in how we play the pink ball."

Root agreed that batsmen need to careful -- and not just in the evening when the lights come on the ball can start swinging.

"I think there's been a trend in all the pink-ball Test matches of collapses on occasion," Root told a separate news conference.

"It seems to be a trend and it's something as a batting group you need to make sure you stop," he said.

"It's sometimes been right at the start of the game, you know the morning session, late on in day four, that this strange sort of passages of play has happened."

He added: "When you get that opportunity and you're on the right side of it, you're in the field with a ball in hand, you really get and roll with it. You take every opportunity and chance and you make that really count in your favour.

"Similarly with a bat in hand, you've just got to really make sure those (first) 20 balls, you're fighting with everything you've got to get yourself in, get accustomed to the wicket, the conditions and make sure you build that partnership which is so vital."