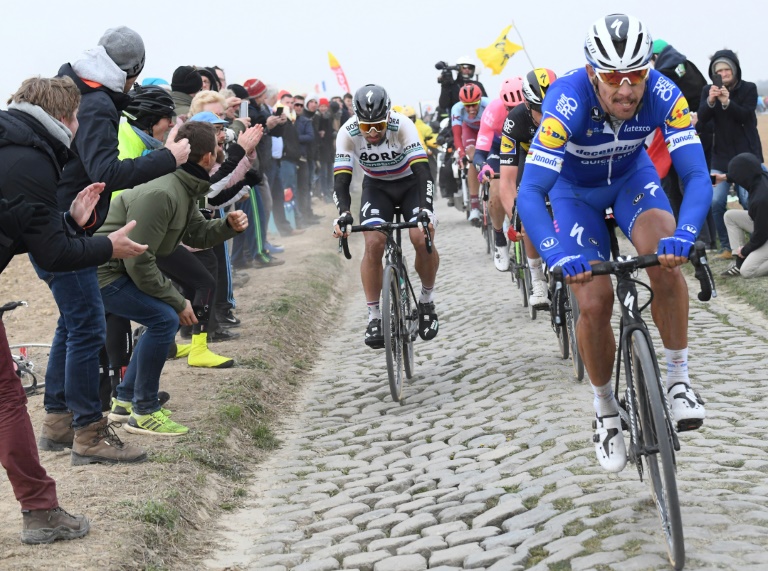 Since Philippe Gilbert (R) won the 117th Paris-Roubaix in April 2019, grass has sprouted between the bone-shaking cobblestones

PARIS - The organisers of Paris-Roubaix, which returns on Sunday, have been battling grass that has sprouted along some of its famed cobbled sectors during the two-and-a-half-year coronavirus hiatus.

The "queen of the classics" was postponed and then cancelled last year and postponed again last spring.

It was last run in April 2019, when the Belgian Philippe Gilbert won.

In the meantime, the "Hell of the North" has grassed over.

The Arenberg trench, one of the three most difficult sectors, had to be thoroughly cleaned last week, to get rid of the grass that covered the cobblestones.

"It seems to me to be correct, there are no rutting problems," said race director Thierry Gouvenou in Templeuve during the traditional course reconnaissance on Tuesday, before checking the condition of the last sectors, notably the Arbre crossroads.

"The Arenberg gap needed a big cleanup," said Gouvenou, adding that some spots still require more weeding before the weekend and stressed that, after several dry years, rain forecast for later this week could result in the first muddy race since the early 2000s.

The 118th edition on Sunday, starts, as it has since 1977, from Compiegne at 0900 GMT and runs 259 kilometres to the Roubaix velodrome and this year features 55 kilometres of cobblestones, in 30 sectors.

On Saturday, Paris-Roubaix will stage for the first time a women's race along a 116.4 kilometre course (29km of its cobblestones) starting in Denain.