In Clermont, where homes are precariously perched on hillsides, he met a family who suffered the deaths of four children after a wall weakened by rains collapsed on them on Monday night.

"I have to come and see for myself the damage," Ramaphosa said as he consoled the family.

"We see such tragedies hitting other countries like Mozambique and Zimbabwe, but now we are the affected ones," the president said.

He was due to visit several other parts of the region pummelled by heavy rains in recent days.

Storms struck the southeastern province of KwaZulu-Natal as Durban, its main city, was still struggling to recover from deadly riots last July which claimed more than 350 lives. 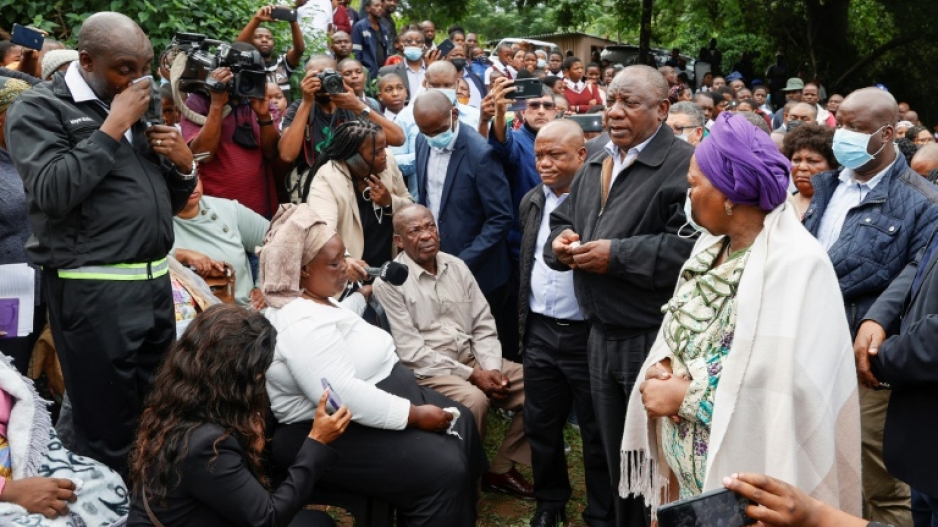 Ramaphosa and the minister of cooperative governance, Nkosazana Dlamini Zuma, right, met flood victims in Clermont, a township of Durban

Officials have reported 59 flood deaths, but say many are missing as rescue and recovery operations are underway.

More rains fell overnight in parts of the province, according to the weather services.

A lull in the rain Wednesday saw residents begin clearing debris from roads and filling up holes left by raging waters to allow cars to pass, an AFP correspondent said.

Parts of the province received more than 300 millimetres (13 inches) of rain on Monday, the heaviest one-day downpour in over 60 years, the South African Weather Service said.