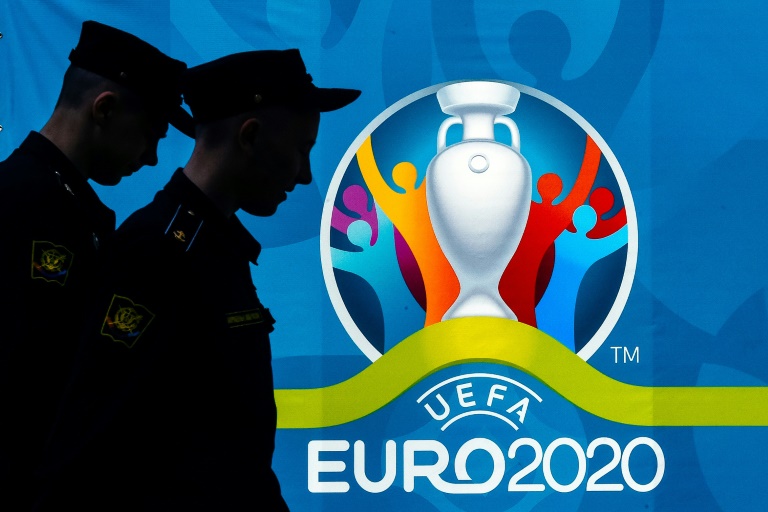 Police officers walking past a UEFA Euro 2020 in Saint Petersburg

MOSCOW - Thousands of fans are set to descend on Russia's former imperial capital Saint Petersburg for Europe's biggest football extravaganza, Euro 2020, even as coronavirus cases are surging in the city.

Russia's second city has been selected to host seven matches - including a quarter-final - in June and July after the tournament was postponed for a year due to the COVID-19 pandemic.

Organisers have said necessary measures will be taken to protect players and spectators, but critics say the city - Russia's worst hotspot after Moscow - long ago threw caution to the wind.

Known for canals and Tsarist-era palaces, Saint Petersburg lifted most virus restrictions months ago and crowds have returned to the streets to enjoy long summer evenings after months of a punishing winter.

"Who needs masks? Everyone has had coronavirus anyway," said Sergei Petrov, a 35-year-old local resident exiting the metro.

As Europe cautiously reopens, Saint Petersburg has over the past month recorded an average of 700 cases a day, but the number of daily infections has exceeded 800 for the last two weeks, according to a government tally.

The health authorities in Russia's second city said Tuesday that coronavirus cases were on the rise.

"The past week has shown that we recorded an increase in COVID-19 infections," the city's governor Alexander Beglov said in a radio interview on Monday.

"It is connected to the cyclical nature of the activity of the virus," he said, adding that his team was taking "all the necessary measures".

Two temporary hospitals for coronavirus patients have been established.

Epidemiologists estimate that more than a half of Saint Petersburg's five million residents have antibodies.

But they said it was worrying that the city had let its guard down so soon.

"The city lives as if the pandemic is over," Anton Barchuk, an epidemiologist at the European University at Saint Petersburg (EUSP), told AFP.

"The pace of vaccinations leaves much to be desired," he added.

Unlike the West, which has put in place multi-layered anti-coronavirus restrictions, Russia has pinned its hopes on a vaccine programme. 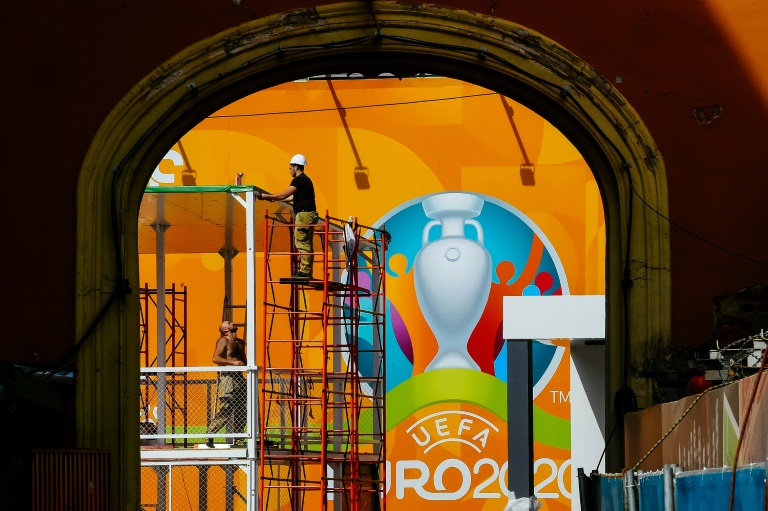 Moscow registered Sputnik V, the world's first coronavirus vaccine, in August 2020 but President Vladimir Putin has struggled to convince Russians to get the homegrown vaccine he calls "the world's best."

Organisers of Euro 2020 in Russia say fans will be required to wear masks during matches and the city's showcase stadium, Gazprom Arena, will be filled at 50 percent capacity.

"We're sure we can provide for all safety measures. We're not afraid," the head of the organising committee for Euro 2020 in Saint Petersburg, Alexei Sorokin, told reporters last month.

Barchuk the epidemiologist said the measures would help reduce contamination risks and that it was unlikely there would be any global impact from the competition.

Russia has been among the countries hardest hit by the pandemic.

Officials have reported more than five million cases and over 124,000 fatalities, but independent experts and even other official counts suggest authorities have vastly underestimated coronavirus deaths.

Hotel and restaurant owners in Saint Petersburg are looking forward to a much-needed boost after the pandemic ravaged the hospitality industry following the closure of national borders last year.

Alexandra Samatuga, who rents accommodation to tourists, said business picked up after confirmation in April the city would host matches.

"We're fully booked," Samatuga told AFP. "These will be the first foreigners in nearly a year. Finally!"

Just around 2.5 million tourists visited Saint Petersburg since the start of the pandemic, down from 10.4 million in 2019.

Earlier this month the city hosted the country's main showcase for investors, the Saint Petersburg International Economic Forum, signalling Russia was moving beyond the pandemic.

"You can see that people miss fun, they miss emotions," said Kirill Sanakin, a representative of the Russian organisers.

Football fan Andrei Barsukov said nothing can spoil the mood.

"We've been waiting for this for a long time and we'll enjoy it," he said.