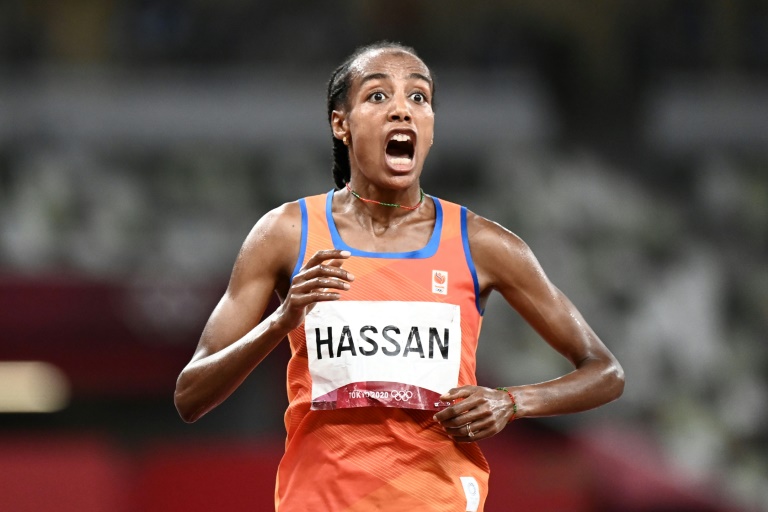 Sifan Hassan won the women's 5,000m in the first leg of an audacious bid for three Olympics golds. AFP/Jewel Samad

TOKYO - Dutch runner Sifan Hassan took a first, giant step in her bid for an unprecedented Olympic treble when she sprinted to gold in the 5,000m Monday -- but admitted she had been "so scared".

Her victory was all the more remarkable given she had competed, and fallen, in the 1500m heats earlier in the day.

Any fears Hassan might have to ride out tactics designed to thwart her from east African rivals Ethiopia and Kenya came to nothing in a slow-paced race that ended with an almighty bang that perfectly suited her explosive finishing skills.

It came after Hassan used up a lot of energy in falling at the bell of her 1500m heat and clawed back a huge gap to qualify for the semi-finals.

"When I fell down and had to jump up I felt like I was using so much energy," she said after her victory in the 5,000m.

"I couldn't believe the feelings in my legs. All the energy seemed to leave me.

"Before the race here I didn't even care.

"I was so tired. Without coffee I would never be Olympic champion. I needed all the caffeine.

Hassan arrived in Tokyo aiming not just for the 5,000m, but also the 1,500m and 10,000m in an unprecedented tilt at middle-distance dominance.

She became the first athlete to achieve the 1,500 and 10,000m world double in Doha in 2019, an astonishing display given that it coincided with a four-year ban handed down to her then coach Alberto Salazar, the head of the now-disbanded Nike-funded Oregon Project.