Scotland quartet in Lions XV for Murrayfield clash against Japan 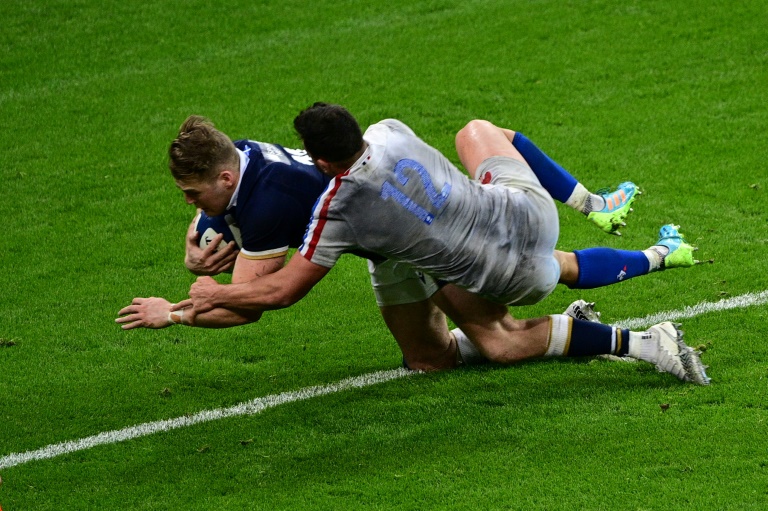 Duhan van der Merwe is one of four Scotland players in the British and Irish Lions XV to play Japan at Murrayfield. AFP/Martin Bureau

EDINBURGH - Four Scotland players have been selected in the British and Irish Lions starting XV for Saturday's landmark match against Japan in Edinburgh.

Wing Duhan van der Merwe, flanker Hamish Watson and props Zander Fagerson and Rory Sutherland will all make their debuts for the combined side, who will be skippered by tour captain Alun Wyn Jones.

This match, staged a day before the squad departs for South Africa for a tour that culminates with a three-Test series against the world champion Springboks, will be the first time the Lions have played in Scotland, with this 'warm-up fixture also their first match against Japan

The back-row selected by Warren Gatland will all be making their Lions debuts, with Ireland's Tadhg Beirne and Jack Conan joining Watson in the loose-forward trio.

But the veteran coach, in charge of the Lions for a third successive tour after a 2013 series win in Australia was followed by a drawn 2017 Test campaign in his native New Zealand, has selected an experienced half-back pairing of Ireland scrum-half Conor Murray and Wales stand-off Dan Biggar.

Bundee Aki and Robbie Henshaw form an all-Ireland centre pairing, with a crowd limited to 16,500 because of coronavirus restrictions expected at Murrayfield for what will be just the Lions third match in Britain.

A crowd of 16,500 will attend the clash in Edinburgh that serves as the curtain raiser to the eight-game tour of South Africa.

"We're anticipating a tough game against Japan -- a side that like to play at a high-tempo and shift the ball," Gatland said after announcing his team on Tuesday.

READ: Erasmus expects Lions to be fast, expansive against Springboks

"We saw throughout the (2019) World Cup they have attacking threats across the park and a solid defence and set-piece."

The former Wales head coach added: "I'm pleased with the progress we've made during our training camp in Jersey so far, but we've got a long way to go.

"Everyone in the squad will get a start before the start of the Test series, so each member of the squad can put their hand up for Test selection.

"We are absolutely delighted to be playing in front of 16,000 supporters in Edinburgh. I'm sure the crowd will give the players an enormous lift before we depart for South Africa on Sunday."

There are no England players in the starting XV but four are on the bench, with captain Owen Farrell and Jamie George providing fly-half and hooker cover respectively despite only arriving into the Jersey camp on Monday.