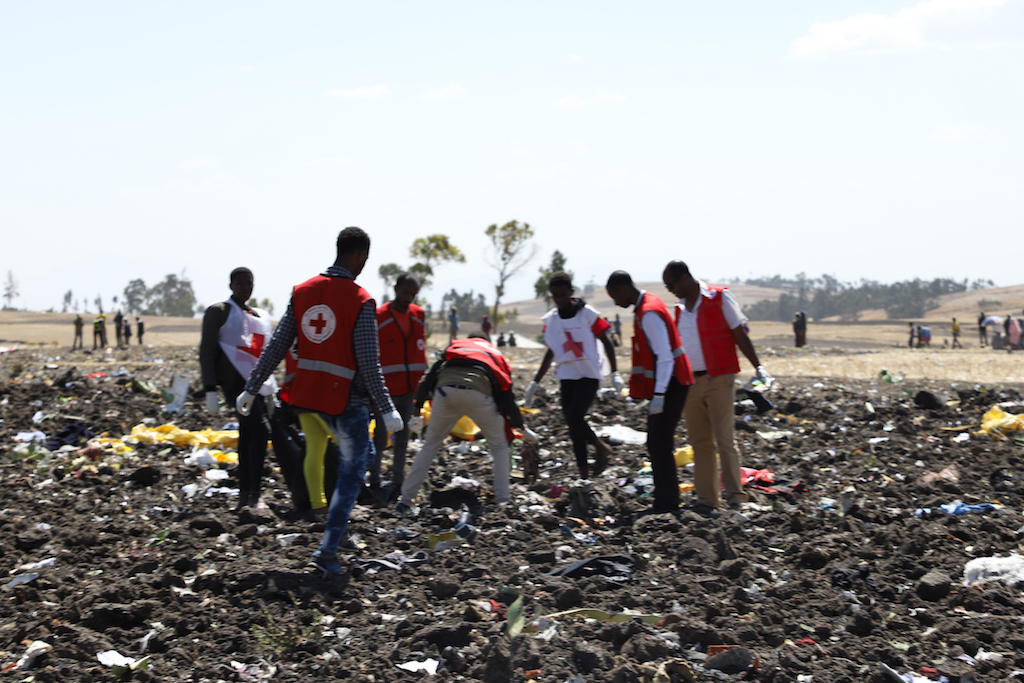 A Red Cross team works amid debris at the crash site of Ethiopia Airlines near Bishoftu, a town some 60km southeast of Addis Ababa.

ADDIS ABABA - Ethiopia will observe a national day of mourning on Monday as investigators search for bodies and clues into the crash of a Nairobi-bound Boeing minutes after takeoff from Addis Ababa, killing all 157 people on board.

Ethiopian Airlines said it will work with Boeing, the national civil aviation authority and international experts in trying to unravel what caused the brand new plane to come down just six minutes into its flight.

Eight crew and 149 passengers from 35 countries perished when Flight ET 302 ploughed into a field near Tulu Fara village outside the town of Bishoftu, some 60 kilometres southeast of Addis Ababa.

A witness told AFP Sunday the plane came down in flames.

"The plane was already on fire when it crashed to the ground. The crash caused a big explosion," Tegegn Dechasa recounted at the site, littered with passenger belongings, human remains, and airplane parts around a massive crater at the point of impact.

A local farmer, Sisay Gemechu, said: "The plane seemed to be aiming to land at a nearby level open field, but crashed before reaching there."

Among the dead were tourists, business travellers, and UN staff, including some who worked for the World Food Programme, the UN refugee agency (UNHCR) and the International Organization for Migration.

The IOM said in a statement early indications were that 19 staff members of UN-affiliated organisations perished in the crash.

Many were headed for an annual assembly of the UN Environment Programme, which opens in Nairobi on Monday with some 4,700 heads of state, ministers, business leaders, senior UN officials and civil society representatives.

Ethiopian Airlines, the continent's biggest carrier, said "the search will continue in the morning".

"A committee comprising of Ethiopian Airlines, Ethiopian Civil Aviation Authority and Ethiopian Transport Authority has been set up to carry out the investigations," it added.

"Once the... deceased are identified, their bodies will be delivered to their families and loved ones."

The US National Transportation Safety Board said it would send investigators to assist, and Canada, which lost 18 citizens, said consular officials were "immediately deployed" to Addis Ababa to determine the facts.

Ethiopia's parliament declared a national day of mourning for Monday amid a global stream of condolences.

"Deeply saddened by the news this morning of the plane crash in Ethiopia, claiming the lives of all on board," tweeted UN Secretary General Antonio Guterres.