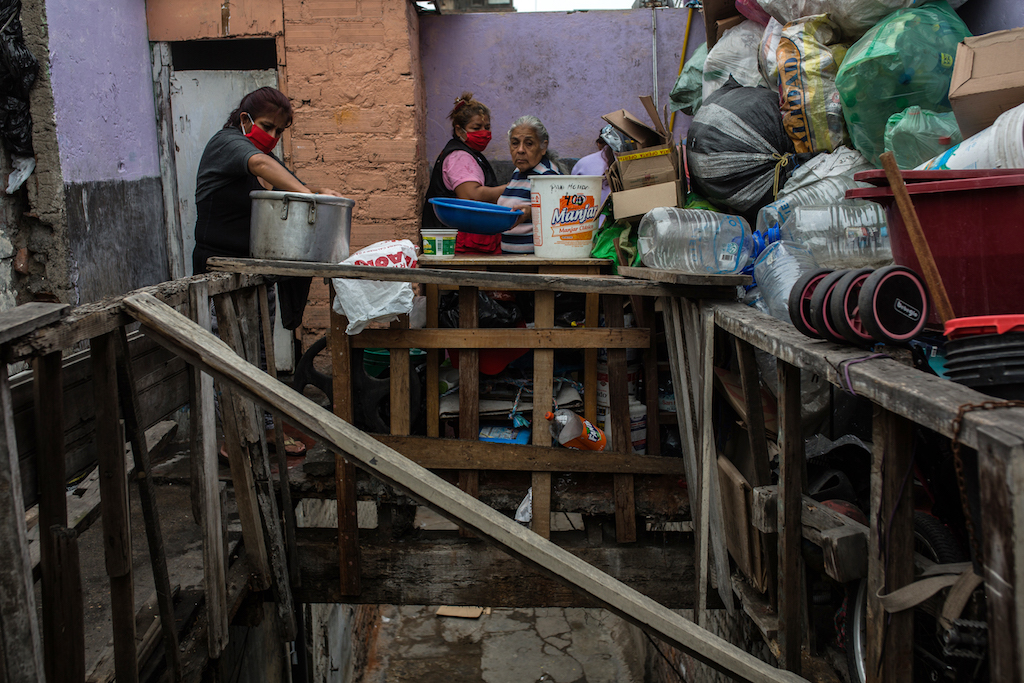 Gloria and Lidia, members of the Miluska Life and Dignity Association, a local umbrella group caring for sex workers, wash cookware and dishes before preparing a daily communal cooking kitchen in downtown Lima, on May 28, 2020.

LIMA - Prevented by the lockdown over the coronavirus pandemic from earning a living, Peru's sex workers have had to organize soup kitchens supplied by food handouts to feed themselves and their children.

"We have 70 meals we're going to make on Tuesday, Thursday and Saturday, because most of the girls work on the streets and there's no work," 61-year-old Lidia Portales, who helps run a foundation that represents sex workers in Lima, told AFP.

If their children have nothing to eat "the mother despairs, and I have three girls who've given birth during the quarantine," added Portales, of the Miluska Life and Dignity network.

In a large house in the historic center of Lima, a group of prostitutes prepare huge pots of cooked food for their colleagues and families.

People in their profession have faced a worrying and uncertain period since Peru enforced a lockdown on March 16.

Wearing red face masks, and some in high heels, the women arrive carrying their children in their arms.

The 53-year-old is president of the network fighting the criminalization of and violence against prostitutes, and their right to access health care.

"We have extreme cases of women who were working in brothels that are now closed. What can they do? How can they support their families?" said Portal.

"Then there are other colleagues in other places who come to work the streets who will also come here for their food."

Peru, a country of 33 million, has recorded the second-most coronavirus cases in Latin America with more than 187,000 and over 5,000 deaths, the third most in the region.

As well as running the soup kitchens, the group has been distributing food in various districts of the capital thanks to donations and from the sale of masks and syrups they made themselves.

Prostitution is legal in Peru but pimping, people trafficking and the sexual exploitation of others are illegal.

That's something that mostly affects poor women from Andean and Amazon areas.

Even though their work is legal, the women are not spared the stigma of such a profession in a socially conservative country.

Despite the lockdown, some sex workers have chosen to risk contracting the coronavirus or arrest in order to go out and work.

"The police are taking us prisoner. When we work they fine us and ask us to take COVID tests," said Portal.

But with families to feed, many have no alternative.

"If they go out to work they're going to expose themselves and their families," said Portal.

"So the government has issued decrees, we're respecting those decrees, but who's respecting our children's stomachs?"

One of her colleagues, who was pregnant, died of COVID-19 but Portal said she was barred from claiming the body to bury it as only family members are allowed to do so.

"I have colleagues with tuberculosis, others with HIV. What do I do with them? What can I tell them? You shouldn't be hungry? You can't go out?" said Portal.