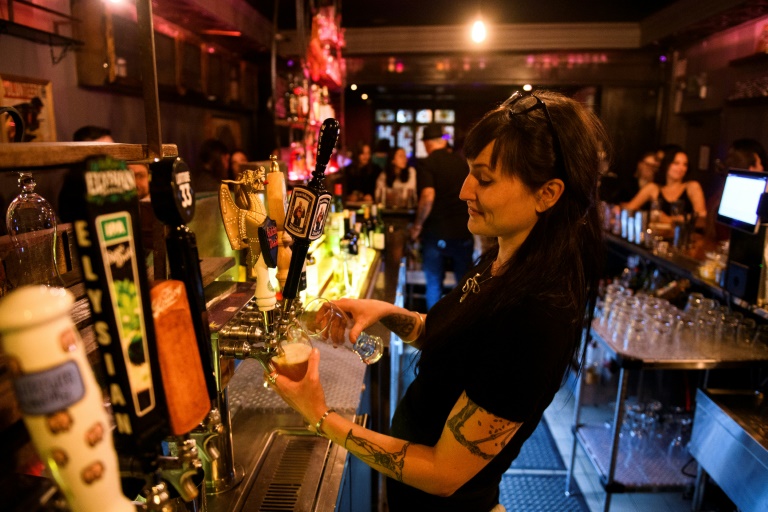 LOS ANGELES - Drinkers in Los Angeles will need to be vaccinated against Covid-19 starting next month, authorities said Wednesday, as mandates spread across the United States.

Bars and nightclubs in Los Angeles county will be required to check that patrons have had the shot, the health department said, in the same way they demand proof of age.

The county, home to around 10 million people, joins New York City in making jabs compulsory for swathes of the entertainment industry, in a country that has not yet fully embraced the life-saving vaccines.

"This is a reasonable path forward that could position us to be better able to break the cycle of the surges," said Dr. Barbara Ferrer, the director of the Los Angeles County Department of Public Health.

The order will also require anyone at an outdoor event with more than 10,000 people either to be vaccinated or to show a negative test result.

The requirement will include sporting events -- such as at baseball and American football games -- as well as at theme parks like Universal Studios Hollywood.

Masks are already mandatory in most indoor public settings in LA County, and some outdoor ones.

Vaccinations and other Covid-19 mitigation strategies are a controversial topic in the United States, with a small but vocal minority fiercely opposed.

Scientists say vaccinations are highly effective at preventing the worst effects of the coronavirus, as well as helping to slow transmission, including of the infectious Delta variant that is tearing through the US.

Despite the ready availability of free and safe vaccines throughout the country, only 54 percent of Americans are fully protected.

Californians resoundingly endorsed Governor Gavin Newsome in a recall election Tuesday, after Republicans had tried to unseat him in part because of his robust response to the coronavirus, which they claimed was overreach.