Egypt's Sisi could stay in power until 2034 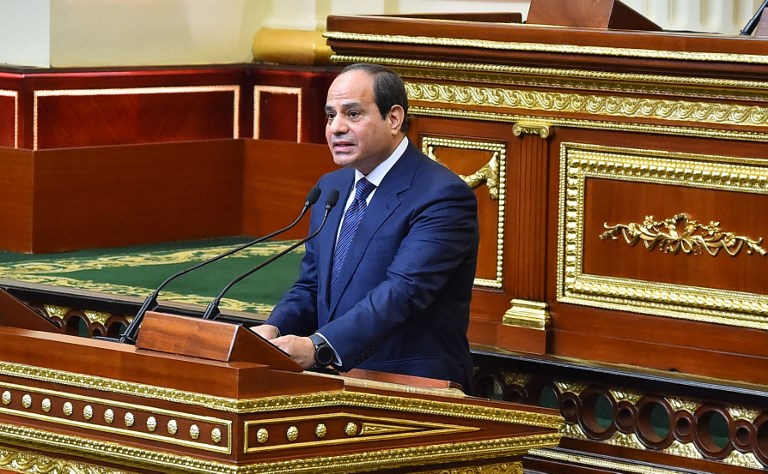 This file handout picture released by the Egyptian Presidency on June 2, 2018 shows Egyptian President Abdel Fattah al-Sisi giving a speech during his swearing-in ceremony for a second four-year term in office in Cairo.

CAIRO - Constitutional amendments proposed by Egyptian lawmakers would allow President Abdel Fattah al-Sisi to stay in power for up to 12 years beyond his current term and boost his control of the judiciary, according to a draft seen by Reuters.

The proposed amendments were submitted to the speaker of parliament on Sunday. Any changes need approval by two-thirds of parliament members, followed by a referendum.

Sisi, a former general, ousted President Mohammed Morsi of the Muslim Brotherhood in 2013 after mass protests against his rule and was elected president the following year.

In recent months, speculation has been building that his supporters would seek to amend a constitutional clause according to which he should step down at the end of his second four-year term in 2022.

The amendments submitted on Sunday include an extension of the presidential term to six years from four in article 140 of the constitution and a "transitional" clause that would reset the clock, potentially allowing Sisi to stay in power until 2034.

"After the expiry of his current term, the President of the Republic may run again in accordance to the amended article 140," the draft clause says.

The proposed changes also give Sisi new powers over appointing judges and the public prosecutor. They add a second parliamentary chamber known as the Council of Senators, in which the president would appoint one-third of the 250 members.

"He is doing a lot of projects and people are fighting him from all sides," said Ayman Abdel Hakim, a lawyer and former civil servant who filed a court case along with 300 Sisi supporters in December demanding that Egypt's parliament debate the two-term limit and consider changing it.

Parliament is overwhelmingly supportive of Sisi, though a 16-member leftist bloc held a news conference on Monday to denounce the proposed amendments, saying they cancelled out the principal gain of Egypt's January 25, 2011 uprising, the changeover of civilian power.

One leftist lawmaker, Haitham al-Hariri, told Reuters the proposals were a "coup against the Egyptian constitution".

"We were naive to think that they would only extend the presidential term limits," he said, referring to the plan to widen the president's powers.

Critics say 63-year-old Sisi has led Egypt deeper into authoritarianism than former president Hosni Mubarak, who was toppled in 2011 after ruling for three decades under a state of emergency.

Rights groups say he has muzzled political opponents, activists and critical media, while courts have passed sentences against hundreds of his opponents.

Some Egyptians took to social media to criticise the draft amendments. "No to changing the constitution" was the top trending hashtag late on Sunday, with more than 26,000 tweets.

"The proposed amendments don't come as a surprise, they are a continuation of what we have seen ever since Sisi came to power or a continued expansion of his powers as well as consolidation of that power," said Timothy Kaldas of the Tahrir Institute for Middle East Policy.