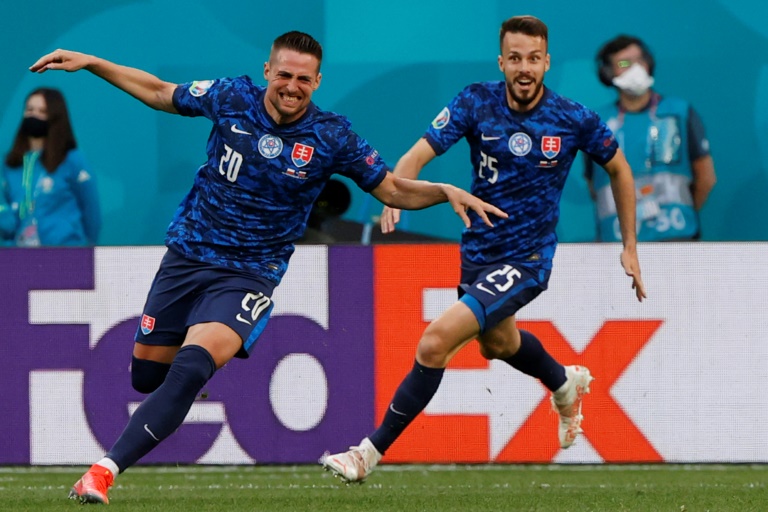 SAINT PETERSBURG - Inter Milan defender Milan Skriniar fired Slovakia to a 2-1 victory over neighbours Poland on Monday in their opening game at Euro 2020 in Saint Petersburg.

An own goal from Poland goalkeeper Wojciech Szczesny handed Slovakia the lead on 18 minutes, but Karol Linetty equalised for Poland right at the start of the second half.

Poland were reduced to 10 men on the hour when midfielder Grzegorz Krychowiak picked up a second yellow card, and Slovakia made their advantage count as Skriniar drove in the winner at a corner.

Slovakia, who reached the last 16 on their European Championship debut five years ago, play Sweden next in Group E on Friday while Poland go to Seville to face Spain the following day.

Poland coach Paulo Sousa opted to start Robert Lewandowski as the lone striker, with his attacking options limited by injuries that ruled both Arkadiusz Milik and Krzysztof Piatek out of the tournament.

Marek Hamsik, who led Slovakia at the 2010 World Cup as well as Euro 2016, earned his record-extending 127th cap for his country after shaking off a niggling calf injury.

Slovakia started well as Ondrej Duda's shot squirmed just wide, and it wasn't long before they went in front.

Robert Mak danced past two defenders as he drifted in from the left wing, his low strike taking a slight deflection and smacking the post before bouncing off the grounded Szczesny and tricking over the line.

Szczesny, who was sent off in the opening game of Euro 2012 when Poland were co-hosts, became the first goalkeeper in the competition's history to be credited with an own goal.

Slovakia midfielder Juraj Kucha's dipping effort from distance dropped narrowly over, and Poland levelled 32 seconds after half-time as Linetty finished off a sharp team move with a scruffy shot that rolled into the corner.

Linetty then stabbed a cross straight at Martin Dubravka, but the dismissal of Krychowiak proved costly as Skriniar controlled a corner and coolly tucked home to put Slovakia back on top.

Jan Bednarek prodded wide in stoppage time as Poland pressed in vain for an equaliser, still yet to score more than once in 12 European Championship games.