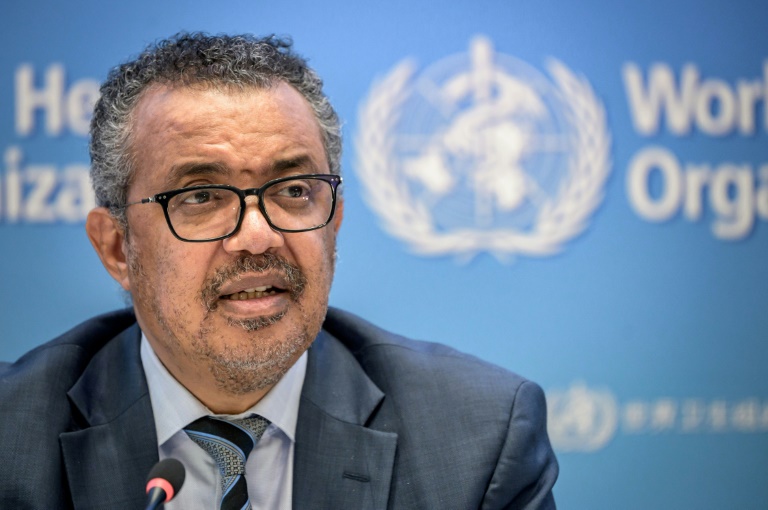 GENEVA - World Health Organization chief Tedros Adhanom Ghebreyesus is all but guaranteed a second term after a procedural vote on Tuesday made him the sole nominee for a leadership election in May.

The first African leader of the UN health agency said he was "very grateful for the renewed support", after the WHO's executive board held a secret-ballot vote approving his nomination as the only candidate for the post of director-general.

"I am actually lost for words," the visibly-moved WHO chief said after nearly all of the board's 34 members, representing countries from around the world, threw their weight behind him.

He was only missing three votes: from absentees Tonga, Afghanistan and East Timor, according to a diplomatic source.

The former Ethiopian minister of health and foreign affairs is thus expected to be  re-elected when all 194 WHO member states cast their ballots in May for the next director-general.

Tedros, one of the most recognisable figures of the global battle against Covid-19, acknowledged that his first five-year term had been "challenging and difficult", and said it was a "great honour" to be given the opportunity to continue the battle.

Since Covid-19 burst onto the global stage more than two years ago, the 56-year-old malaria specialist has received much praise for the way he has steered the WHO through the crisis.

"We appreciate not only your leadership during this period, but also your humanity and your compassion," South Korean representative Kim Ganglip said, speaking for WHO's western Pacific region.

African countries have been pleased at the attention paid to the continent and at his relentless campaign for poorer nations to receive a fair share of Covid vaccines.

The main source of opposition against Tedros has ironically come from his own country.

Ethiopia's government has slammed his comments about the humanitarian situation in his home region of Tigray, in the grip of a 14-month conflict, and has demanded he be investigated for "misconduct and violation of his professional and legal responsibility".

Ethiopia's position has not garnered much support.

Addis Ababa blocked the African Union from unanimously presenting Tedros as its nominee ahead of Tuesday's vote, but several African countries figured among the 28 mainly European nations that officially put his name forward.

That marks a major about-face from the start of the pandemic, when former president Donald Trump began pulling the United States out of the WHO, accusing it of being Beijing's puppet and helping cover up the initial outbreak.

Trump's successor Joe Biden halted the withdrawal, and the new administration has voiced stronger support for Tedros who has taken a sterner tone with China, demanding greater transparency around the origins of the outbreak.

Beijing has rebuked the WHO chief for some of those comments, but still supports his candidacy.

Beyond the pandemic, Tedros has faced a barrage of criticism, including from nations supporting his second term bid, over his handling of devastating allegations of rape and sexual assault by humanitarian workers, among them 21 WHO employees tackling Ebola in the Democratic Republic of Congo between 2018 and 2020.

Tedros told the board he had been "horrified" by those reports, insisting the WHO had "zero tolerance for sexual exploitation, abuse and harassment".

Tedros's second term will likely be dominated by the towering task of strengthening the WHO, after Covid-19 exposed its weaknesses.

"The pandemic has highlighted the challenges we face; that the world was not prepared," he said during a two-hour hearing before Tuesday's vote.

Many countries are demanding significant reforms, but their extent and shape have yet to be defined, with some nations wary a stronger WHO might encroach on their sovereignty.

Tedros is also calling for a vast reform of financing, warning funds are lacking to respond to the numerous crises WHO faces around the globe.