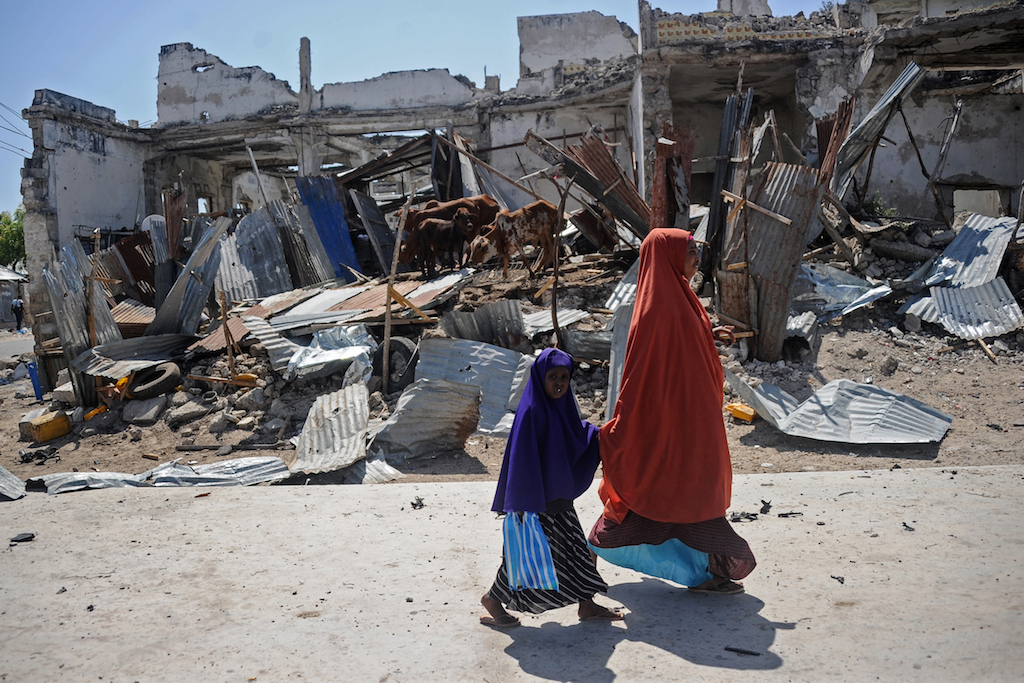 Somalians walk next to the scene of a car bombing attack in Mogadishu, Somalia.

MOGADISHU - Seven people were killed on Saturday in a double car bomb attack claimed by the jihadist Shabaab group near the presidential palace in the Somali capital Mogadishu, police said.

"We have confirmed seven people died in the two blasts and more than ten others wounded," local police spokesman Ibrahim Mohamed said.

"The security forces have cordoned off the area and an investigation is ongoing."

Somalia's London-based Universal TV said three of its staff were among the fatalities, naming one as Somali and British dual national Awil Dahir

The first explosion happened at a checkpoint outside the national theatre, some 500 metres (yards) from the palace.

The second blast, more powerful according to witnesses, came minutes later at a nearby crossroads.

"The second blast was very big," Idil Hassan, who witnessed it, told AFP.

"I saw the dead bodies of several people, including members of the security forces."

Another witness, Osman Fahiye, said a leading official from Banadir, a region which surrounds Mogadishu, was hurt in the second blast.

"He was lightly wounded but several of his security guards were killed in the blast," said Fahiye.

A Shabaab statement said the Islamist group's "martyrdom operation" had targeted "a security checkpoint that used to protect the presidential palace."

The group was largely driven out of the capital in 2011 and has lost many of its strongholds. But it retains control of large rural swathes of the country and continues to wage a guerrilla war against the authorities.

The group has vowed to topple the internationally-backed government.

The worst carnage to date in Somalia occurred on October 14 last year when 512 people were killed in Hodan, a busy commercial district in the capital.

Nobody claimed responsibility but the authorities believe Shebaab were behind it.