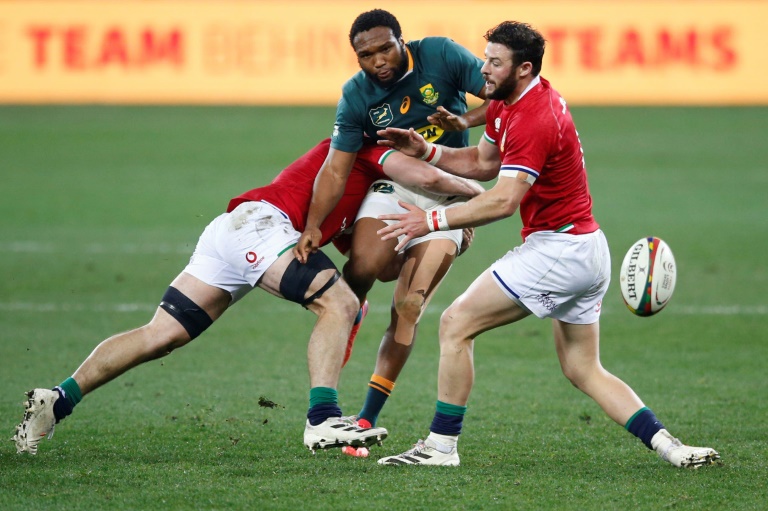 CAPE TOWN - South Africa overcame the loss of injured star forward Pieter-Steph du Toit on Saturday to score 21 unanswered second-half points and beat the British and Irish Lions 27-9 to level the series ahead of next weekend's final Test.

The dominance of the Springboks after half-time yielded tries from winger Makazole Mapimpi and centre Lukhanyo Am and the tourists finished a well-beaten team before next Saturday's series decider, also in Cape Town.

Fly-half Handre Pollard scored the rest of the home points from a conversion and five penalties while rival playmaker Dan Biggar slotted three penalties for the Lions.

Van der Merwe and Springboks counterpart Cheslin Kolbe were yellow-carded within two minutes of each other midway through the opening half of a match superbly refereed by New Zealander Ben O'Keeffe.

As was the case in first Test last weekend, won 22-17 by the tourists, it was a tale of two halves at a spectator-less Cape Town Stadium due to the coronavirus pandemic.

The Lions led 9-6 at half-time and the advantage would have been greater had Springboks skipper and flanker Siya Kolisi not got an arm under the ball to prevent Lions centre Robbie Henshaw scoring.

After 45 minutes, Mapimpi snatched a Pollard cross-kick, cut inside and evaded several tackles to score and give the hosts a lead they never surrendered.

Am struck just past the hour mark, getting first to a grubber kick from scrum-half Faf de Klerk just before the ball crossed the dead-ball line.

Pollard converted for an 18-9 advantage and then kicked three penalties against opponents who had nothing to offer as an attacking force in the closing stages.

South Africa will create history if they triumph again next weekend as neither they nor the Lions have won a series between them having lost the first Test.