Desmond and Leah Tutu get their COVID-19 jabs 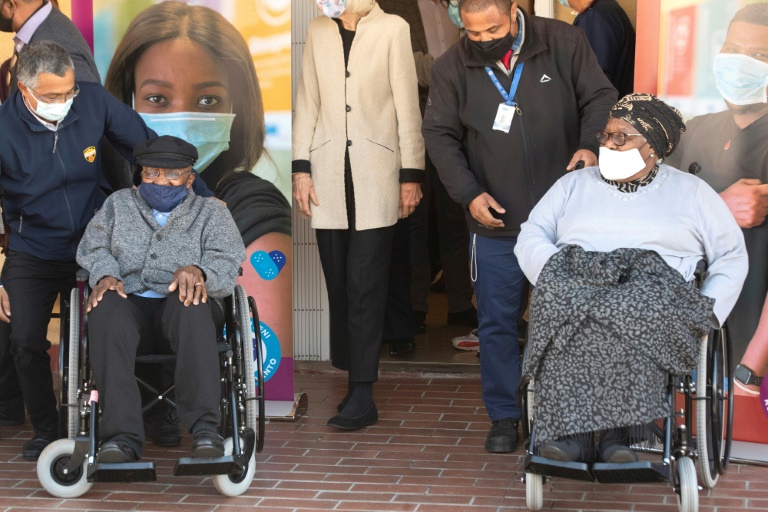 Desmond Tutu and his wife Leah were among the first seniors to be vaccinated as the drive kicked off. AFP/Rodger Bosch

CAPE TOWN - After much delay and on the cusp of a third wave of COVID-19 infections, South Africa on Monday launched a large-scale immunisation drive, targeting around five million people aged over 60 by the end of June.

Among the first seniors to receive their vaccinations under the mainstream campaign was Archbishop Emeritus Desmond Tutu.

Tutu and his wife Leah emerged in wheelchairs from the Brooklyn Chest Hospital in Cape Town after being immunised.

Meanwhile, Health Minister Zweli Mkhize was on hand as nurses administered jabs at an elderly care facility in Krugersdorp.

"Five million senior citizens are targeted to be completed by the end of June, provided that the supply of vaccines flow as anticipated," Mkhize said.

He said the country expects to have received 4.5 million doses of Pfizer and two million J&J doses in the next six weeks.

Minister Mkhize said the vaccinations would start "fairly slowly" but be ramped up towards the end of the month "because we are starting off with a new vaccine we have never used before."

Earlier today, Archbishop Emeritus, Desmond Tutu and his wife, Leah Tutu, were vaccinated as part of Phase 2 of the COVID-19 vaccination drive, helping to send a strong message to the rest of the Western Cape: the vaccine is safe and effective. #LetsDoThis, Western Cape! pic.twitter.com/fHXpG5SBGn