DOHA - Son Heung-min was everywhere around Education City Stadium with South Korean fans sporting his shirt and a giant cutout of his face, but on the pitch their talisman was a subdued figure in Thursday's 0-0 World Cup stalemate with Uruguay.

All the talk among South Korean supporters in the build-up to their opener in Qatar was about the fate of superstar forward Son.

The Korean skipper, who has scored 35 goals in just over 100 appearances for his country, suffered a nasty collision while playing for Spurs in the Champions League at the start of November.

The 30-year-old suffered fractures around his left eye and required surgery.

Son had assured fretting South Korean fans that he would play at the World Cup, and here he was three weeks later, leading his country out on the biggest stage of all.

Son has been training in Doha with a shiny black mask to protect the wound and he emerged with it on from the moment he warmed up against Uruguay. 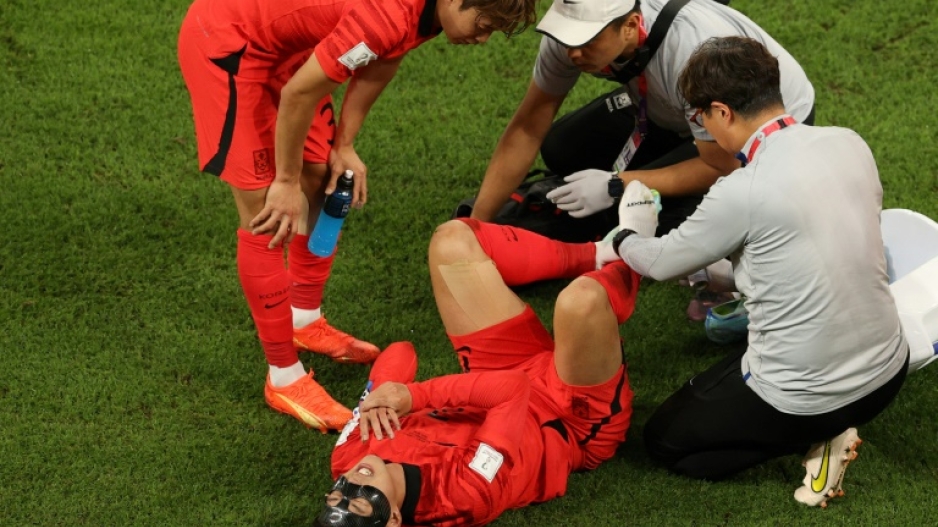 South Korean fans know that their star man -- who shared last season's Premier League Golden Boot with Mohamed Salah -- is crucial if they are to get out of the group stage for the first time since 2010.

His red number seven shirt was everywhere among South Korean fans in the stadium. Some had '7' painted on their cheeks, there was also a large cutout of his smiling face -- mask not included.

"SuperSONic" read one placard held aloft before kickoff. "You are my Sonshine" said another.

Playing off the left, screams went up each time Son touched the ball.

But this was a mostly quiet reintroduction to football for him and the mask was clearly a nuisance, as he fiddled with it throughout the game.

His captain's armband also proved an annoyance and kept slipping down his arm. He took an early corner with it in his hand and soon afterwards swapped it for one that fit better.

As soon as the half-time whistle blew, Son whipped the mask off to reveal a small scar by his left eye.

After a tight first half in which Uruguay captain Diego Godin came closest to scoring when his header smacked a post, Son was immediately into the action at the start of the second half.

There had been only glimpses of him in the first period, but Son wriggled past one defender and had a sniff of goal, only for Jose Maria Gimenez to hook the ball from his possession in the box.

Veteran Uruguay defender Martin Caceres was never far away and he was booked when he trod painfully and cynically on the back of Son's foot, leaving the South Korean in agony on the floor. Son temporarily lost his boot.

Son might have won the game at the death, but uncharacteristically pulled his left-footed shot from just outside the box wide of the Uruguay goal.