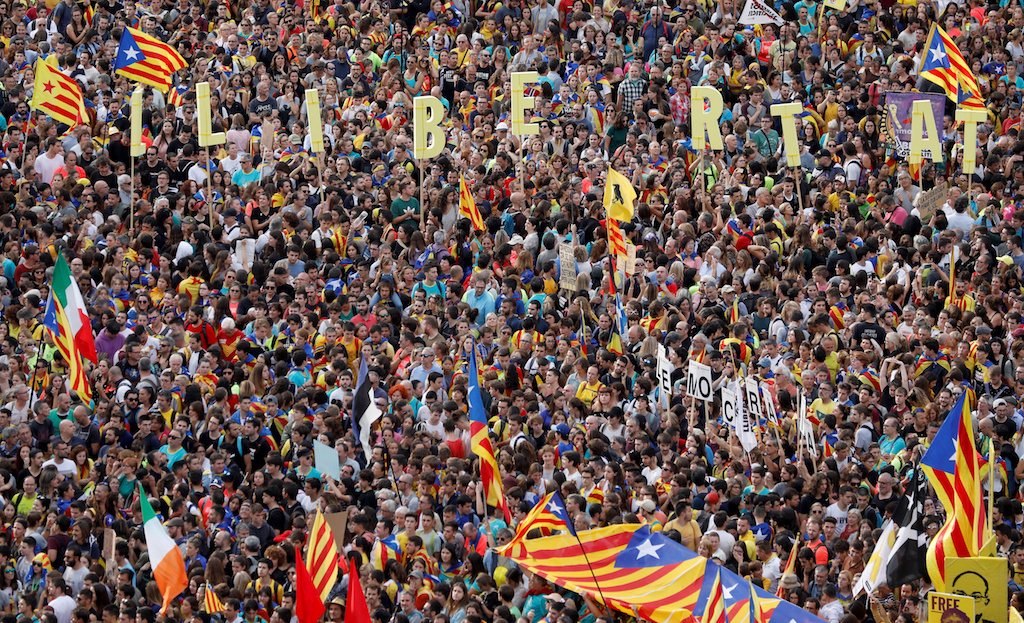 BARCELONA - Spain's government dismissed calls on Saturday from Catalonia's pro-independence regional chief for talks over a wave of violence sparked by the jailing of separatist leaders, as police braced for fresh protests.

Barcelona saw its worst night of disturbances in decades on Friday as masked youths blocked roads with blazing garbage bins and hurled rocks at security forces, who responded by firing repeated rounds of smoke grenades and tear gas.

Catalonia's president, Quim Torra, said the violence did not reflect the peaceful nature of the traditional Catalan independence movement and asked for discussions with Madrid.

"We urge the acting prime minister of the Spanish government to sit at a negotiating table to talk," he told reporters.

"Mr Torra must strongly condemn the violence, which he has not done so far," Sanchez said in a statement, adding he also needed to build bridges with the many Catalans who do not want secession.

"The government of Spain reiterates that the problem of Catalonia is not independence, which will not occur because it is not legal and nor do the majority of Catalans want it, but rather coexistence," he said.

Protests erupted this week after Spain's Supreme Court handed down lengthy prison terms to nine Catalan leaders for their role in a failed independence bid in 2017, which included holding a referendum that courts had deemed illegal.

Radical youth group Arran called for a new demonstration at 6pm (1600 GMT) against "police violence" and to demand the "freedom of all political prisoners".

Police said they feared renewed confrontations and advised shopkeepers in the city centre to close during the protest.

Independence is a highly divisive issue in Catalonia, which is Spain's wealthiest region and has some 7.5 million inhabitants and its own language, parliament and flag.

An opinion poll in July showed backing for secession at its lowest level in two years, with 48.3% of people against and 44% in favour.

Spain's main parties have consistently refused to hold an independence referendum in the region, although Sanchez's Socialists have said they are open to dialogue on other issues.

Torra said earlier this week said Catalonia should hold a new vote on self-determination within two years. On Saturday, he said the will of the people would be respected: "We will go as far as the people of Catalonia want to go".

Some 300 people have been arrested in clashes that have flared throughout the region since Monday's court verdict.

"The situation is under control. There is serious, organised violence ... but I reiterate that we are not being overwhelmed," he said after visiting injured police in hospital.

Barcelona's mayor Ada Colau, who does not support the secessionist movement, said her city "does not deserve what we are living through". Pavements had been torn up and hundreds of plastic garbage bins torched in the unrest, she said.

Barcelona is Spain's second-largest city and draws millions of tourists each year.

Three city roads remained closed on Saturday because of the damage, with some foreign visitors caught unawares by the chaos and shocked by what they saw.

"We got here and were like 'Oh God'. The street was on fire in front of the hostel," said Flynn Winstanley, 18, a winery worker from Margaret River in Australia.