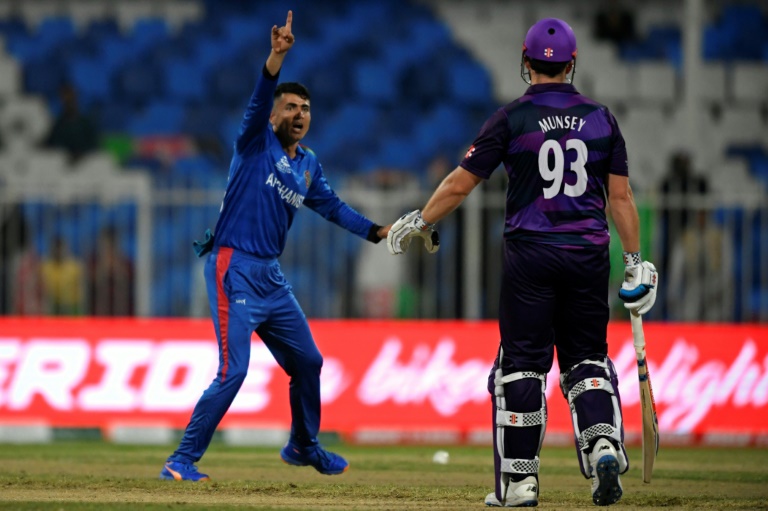 SHARJAH - Spinner Mujeeb Ur Rahman took five wickets as Afghanistan fired a warning to their rivals in the Twenty20 World Cup with a 130-run rout of Scotland.

Chasing a daunting 191 for victory, Scotland were skittled out for 60 in 10.2 overs with five batters dismissed for ducks in Sharjah.

Najibullah Zadran set up the win with his 34-ball 59 to guide Afghanistan to their best total of 190-4 in the tournament after they elected to bat first.

"The world knows we have some good spinners in the form of Rashid and Mujeeb, they've played everywhere (league cricket) in the world," skipper Mohammad Nabi said after the win.

"It was Mujeeb's first game in the T20 World Cup and he got the man of the match, it's fantastic."

Mujeeb emerged as the hero with three wickets in one over, including two in successive deliveries, to decimate Scotland's top order.

Scotland, who made the Super 12s of this event for the first time after they won all three matches in the qualifiers, could never recover after Calum MacLeod, Richie Berrington and Matthew Cross fell without scoring, and the team crashed to their lowest T20 total.

Earlier, Najibullah and Rahmanullah Gurbaz (46) put together an attacking 87-run partnership for the third wicket, tearing into the Scotland bowling with seven sixes between them.

Najibullah fell to the final ball of the innings while attempting his fourth six in a 34-ball blitz that took Afghanistan past their previous tournament-high of 186 in 2016.

Hazratullah Zazai put on a quickfire opening stand of 54 with Mohammad Shahzad, who made 22.

"The way our openers started really well, finished the powerplay with a good score, and then Rahmanullah Gurbaz and Najibullah Zadran rotated the strike really well," said Nabi.