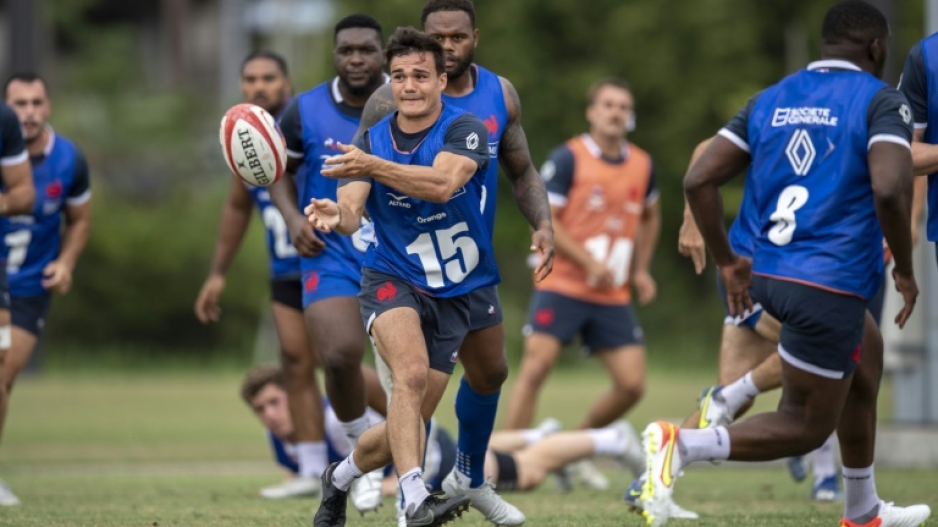 France's Max Spring attends a practice session in Urayasu, Chiba prefecture ahead of his team's second rugby Test against Japan

Six Nations champions France beat Japan 42-23 in Toyota last week, scoring four tries in the second half to stretch away after being held 13-13 at the break.

Racing 92 full-back Spring replaces Melvyn Jaminet in the starting line-up to win his first cap at the age of 21.

Spring started and scored a try for the Barbarians in their 52-21 drubbing of England last month and Galthie said his performances had "shown his hunger for the shirt".

"At Racing 92 he has put together a string of impressive performances," said the coach.

"He was selected by the Barbarians, where he started at full-back and put in a very impressive performance."

Galthie added that Spring had "maintained that level in training" with France, even though he had missed the first week after contracting Covid-19.

Galthie retained lock Thomas Jolmes and number eight Yoan Tanga in the starting line-up after both made their debuts last weekend.

Charles Ollivon, who returned to the side last week after missing the Six Nations through injury, continues as captain.

Japan made life difficult for France in the first half in steamy Toyota, where the heat soared to 33 degrees Celsius (91 Fahrenheit) at kick-off.

Cooler temperatures are forecast for Saturday at Tokyo's National Stadium and Galthie is wary of a different Japanese approach.

"In the end our strategy was a good one and we succeeding in winning the match but we imagine that Jamie Joseph and his staff will reconsider their tactics," he said.

Japan head coach Joseph said his team would have to play "smarter" after he made three changes to the side that collapsed in the second half last week.

New Zealander Joseph said his team would not abandon their dynamic passing game but called for his players to find the "control" that escaped them in Toyota.

"We've just got to get a bit of balance into our game and make sure that we don't try to change our game," he said.

"That's the way we play the game of rugby but we've just got to be a little bit smarter when we have the ball."

Joseph was able to welcome back two players who missed last week's game after testing positive for Covid.

Scrum-half Naoto Saito returns to the starting line-up while World Cup veteran hooker Shota Horie was named on the bench.

Joseph shuffled his lock forwards but kept faith at fly-half with the inexperienced Seungshin Lee.

The 21-year-old won only his second cap last week after being drafted in the day before the game when Takuya Yamasawa tested positive for the virus.

"We think he's got a lot of potential," Joseph said.

"Giving him another opportunity on the back end of last week is only going to see Lee become a better player faster."

France also have several inexperienced players after Galthie named an experimental squad for the trip to Japan.

The coach urged his young players to play with freedom and said French flair was "part of our DNA".

"Instinct, individual reflex based on dazzling play and risk-taking -- it is something we try to develop and to capitalise on," he said.

"Think of playing to your qualities -- don't think about what you are lacking."