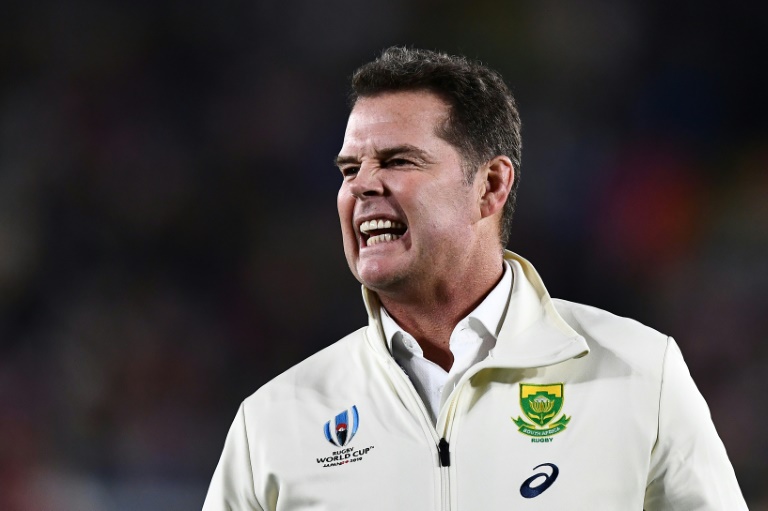 South Africa rugby director Rassie Erasmus was unhappy with the refereeing of Australian Nic Berry in the first Test against the British and Irish Lions last Saturday. AFP/Anne-Christine Poujoulat

The video, posted on online platform Vimeo, contains 36 clips which Erasmus claims show errors by Australian referee Nic Berry and other officials in the match won 22-17 by the Lions.

Berry and the other three officials will also handle the second Test in Cape Town on Saturday.

New Zealand's Ben O'Keeffe will take over from Berry with the whistle while Berry and Mathieu Raynal of France will be the assistant referees.

South African Marius Jonker, who was subjected to considerable criticism and online abuse after the first Test, will again operate as the television match official.

Erasmus could face sanctions from World Rugby for his outspoken criticism.

Erasmus said he had wanted to "get clarity" from Berry last Sunday, but Berry had been available only on Tuesday, making it difficult for the Springboks to incorporate some of the interpretations into their preparation for the second Test on Saturday.

He alleges that the Lions were able to get away with offences which Berry had specifically said in a pre-match briefing would not be allowed.

Erasmus said the video was made in his personal capacity.

"I am not sure what will be the response," he said, but went on to add that if World Rugby wanted to take action against him he would, if necessary, step away from the team management.

"It is frustration," he said. "We have been waiting for this series for 12 years."

Erasmus accused Lions coach Warren Gatland of putting "uncalled-for" pressure on South African TV match official Jonker, which he suggested may have had an influence on key decisions, including a disallowed try by Willie le Roux.

Erasmus conceded that several of the clips that he highlighted were decisions that could have gone either way –- but he also believed important calls went against the world champions.

These included a spear tackle by Hamish Watson on Le Roux, which he said should have been punished with "nothing less than a yellow card," which would have meant the Lions playing 10 of the last 17 minutes with only 14 men.

He also said there were two incidents in the last move of the match, when the Springboks were trying desperately to score a try to equalise, which could have resulted in penalties against the Lions.