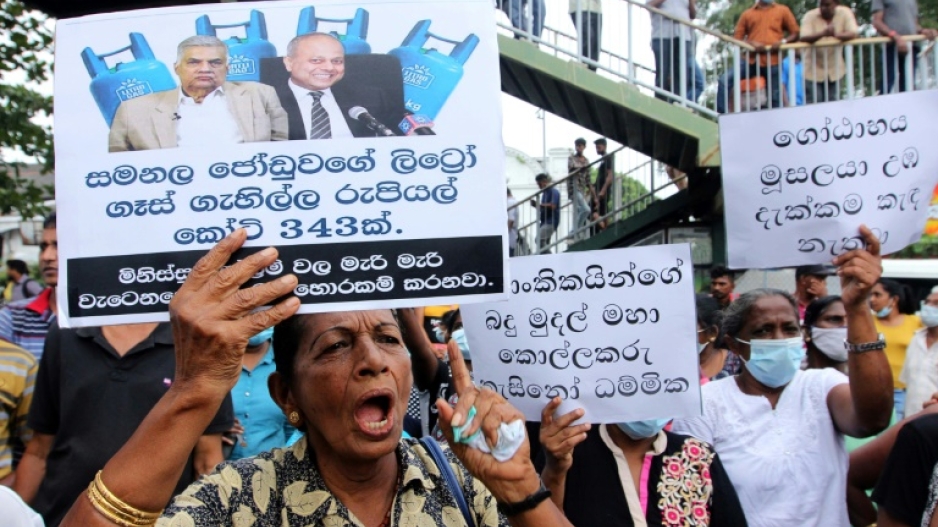 Sri Lanka has been hit by widespread protests calling for President Gotabaya Rajapaksa to step down. AFP

The Central Bank of Sri Lanka ramped up its benchmark deposit and lending rates to 14.5 percent and 15.5 percent respectively, after data showed inflation soared to a record 54.6 percent last month.

Officials said the hike was aimed at containing runaway prices, which were forecast to rise 80 percent by year's end, and reduce any build-up of demand pressures in the shattered economy.

The central bank said the economy could go into a recession this year, having grown 3.7 percent last year and contracted 3.6 percent in 2020.

Prime Minister Ranil Wickremesinghe told parliament the economy could shrink as much as 7.0 percent.

The bank said economic activity in the second quarter of this year had been severely affected by electricity and fuel shortages, while all non-essential offices and schools have been told to shut in a bid to reduce commuting and save scarce energy.

The country is officially out of petrol and diesel, while fresh supplies are at least two weeks away.

The government defaulted on its $51-billion foreign debt in April and is negotiating a possible bailout with the International Monetary Fund.

"Significant progress has been made with respect to negotiations with the IMF towards reaching a staff-level agreement on the Extended Fund Facility (EFF) arrangement in the near term," the central bank said.

It added that negotiations were also underway with several bilateral and multilateral partners to secure bridging financing.