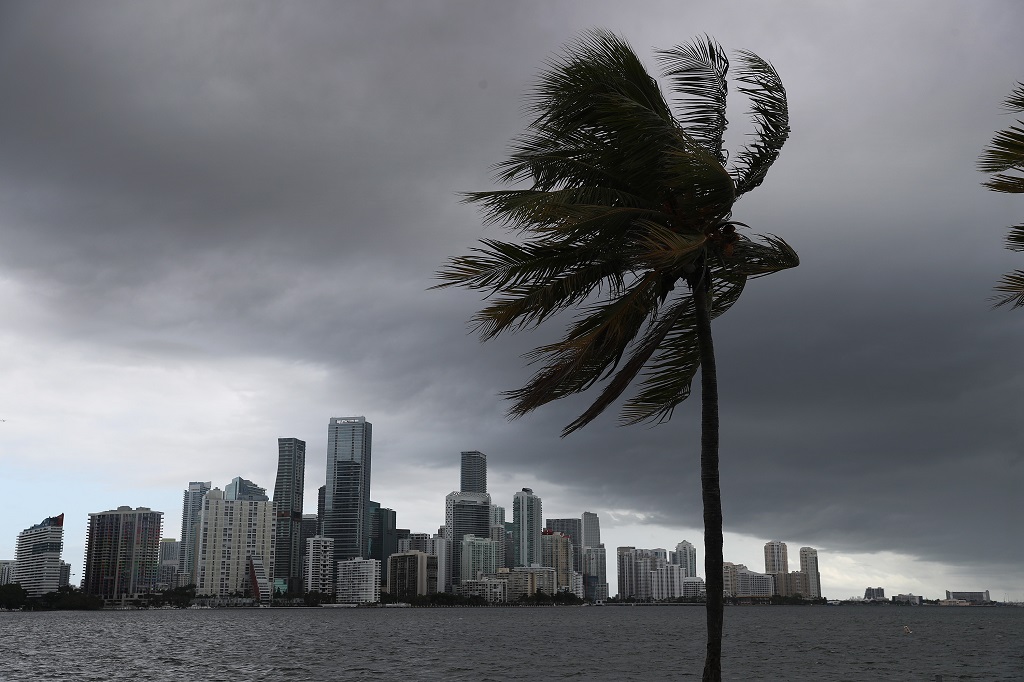 Storm clouds are seen over the city as Hurricane Isaias approaches the east coast of Florida on August 01, 2020 in Miami, Florida.

MIAMI - Isais, downgraded from a hurricane but still a powerful tropical storm, churned close to Florida on Sunday, set to brush the state's east coast with strong winds and potential coastal flooding.

READ: Hurricane Isaias lashes the Bahamas as it bears down on Florida

On its current path, Isaias will move near or along Florida's east coast during Sunday, the Miami-based NHC said. On Monday and Tuesday, its center would move from offshore of the coast of Georgia into the southern mid-Atlantic states.

It was not expected to change much in strength in the next couple of days.

Parts of the U.S. East Coast from south Florida to Cape Fear in North Carolina could be hit by storm surges - when a storm pushes tidal levels above normal - of as much as 4 feet (1.22 m), the NHC said.

Isaias was not expected to affect the return home on Sunday of two NASA astronauts who rode to the International Space Station aboard SpaceX's new Crew Dragon.

They were heading for a splashdown in the Gulf of Mexico, off Florida's northwest coast, capping a two-month voyage in space that marked NASA's first crewed mission from home soil in nine years.

Florida is used to being hit by hurricanes, but its well-honed storm responses have been partly upended by its grappling with one of the country's worst coronavirus outbreaks.

The state has recorded more than 480,000 cases, with tens of thousands recorded in the last week alone, according to a Reuters tally.

The storm lashed parts of the Bahamas with high winds and heavy rainfall en route to the United States. It caused at least two deaths in the Dominican Republic and knocked out power for thousands of homes and businesses in Puerto Rico, according to media reports.