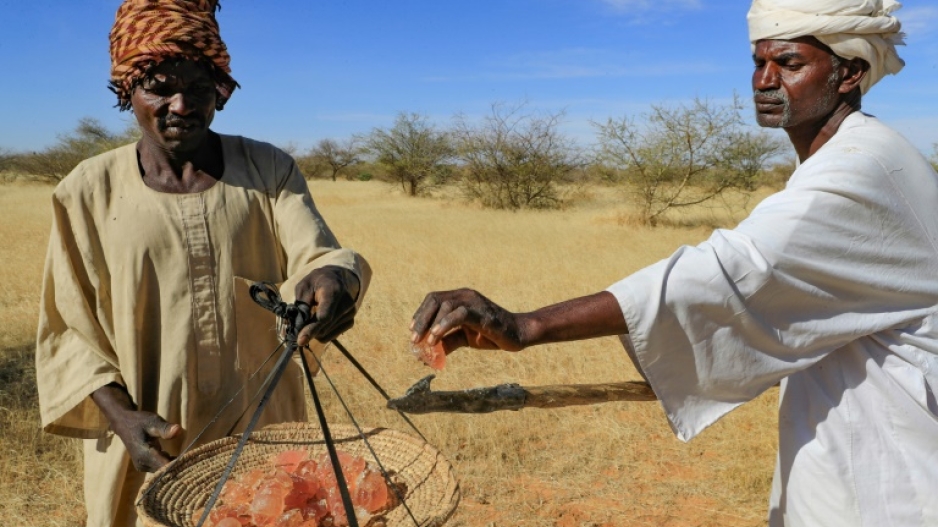 Gum arabic, a resin tapped from the acacia tree, is used in everything from soft drinks to pharmaceuticals but for leading world producer Sudan it is also seen as a key weapon in the fight against desertifcation

A vast belt of trees vital for global production of fizzy drinks helps Sudanese farmers adapt to climate change, but in the harsh drylands, many are reluctant to take up the trade.

Gum arabic, golden blobs of resin tapped from thorny acacia trees, is an emulsifying agent virtually irreplaceable for global industry. The ingredient is used in everything from soft drinks to chewing gum and pharmaceuticals.

Sudan, in northeastern Africa, is among the countries hardest hit by climate change but is also the world's largest producer of the raw gum.

"It's an important tree to fight desertification as it is drought resistant -- and also increases the soil fertility, essential to increasing crop production," said Fatma Ramly, coordinator of the Gum Arabic Farmers' Association, which counts seven million members.

To harvest the amber-coloured resin, farmers must suffer the same climatic extremes as their trees.

"We work for hours on end under a burning sun," said Mohammed Moussa, who collects resin at the state-owned Demokaya research forest, about 30 kilometres (20 miles) from the North Kordofan state capital, El Obeid.

Moussa faces a constant struggle with the shortage of water in largely desert Sudan. His earnings from the trees barely "provide enough money to buy water to cover us until the autumn" rainy season. 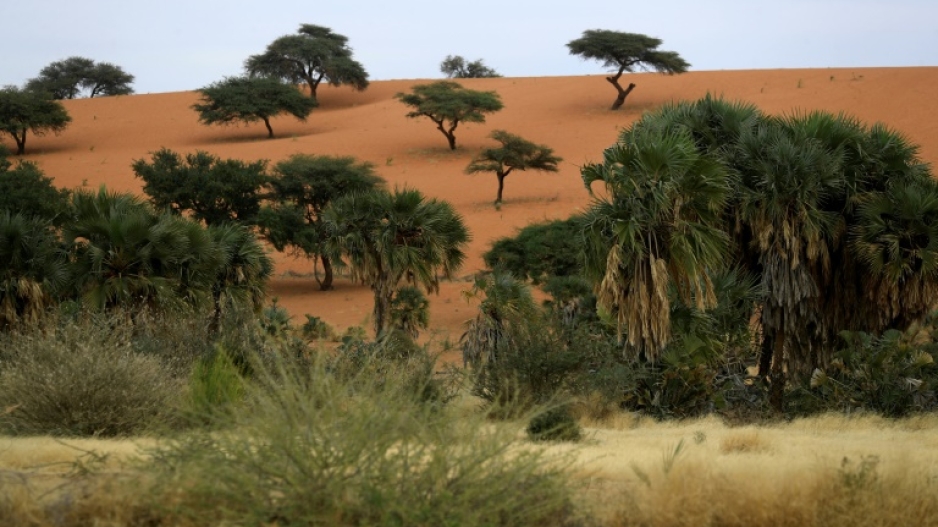 Sudan's gum arabic belt, which covers some 500,000 square kilometres (193,000 square miles) from Gedaref in the east to Darfur on the border with Chad, has been hit hard by climate change which has seen growing encroachment by the desert

Recorded temperatures in Sudan's Kordofan region have increased by almost two degrees Celsius in less than three decades, more than double the global average, according to the UN Food and Agriculture Organization (FAO).

"Water scarcity is one of the key challenges for people" living in the acacia zone, said Madani Ismail, of the state-run Agricultural Research Corporation.

Farmers also have to contend with wide fluctuations in the price of gum on world commodity markets.

The return barely covers the cost of production for Abdelbaqi Ahmed, 52, who owns a 28-hectare (70-acre) plot of acacia trees in Botei, North Kordofan.

He cultivates other crops to help boost his income from the trees, whose bark he cuts with a "sunki" -- a sharp blade attached to a long wooden shaft able to reach up high in the tree.

"It is a laborious task," said Ahmed, who sometimes hires others to help with the tapping. "So it doesn't usually pay off."

Others can't be bothered at all.

Some cut down the trees for building materials or firewood. Many work in the nearby gold mines, like four of Ahmed's five sons.

For Abdallah Babiker, who also works in Demokaya, it's the same. His three sons would rather prospect for gold than tend acacia trees. 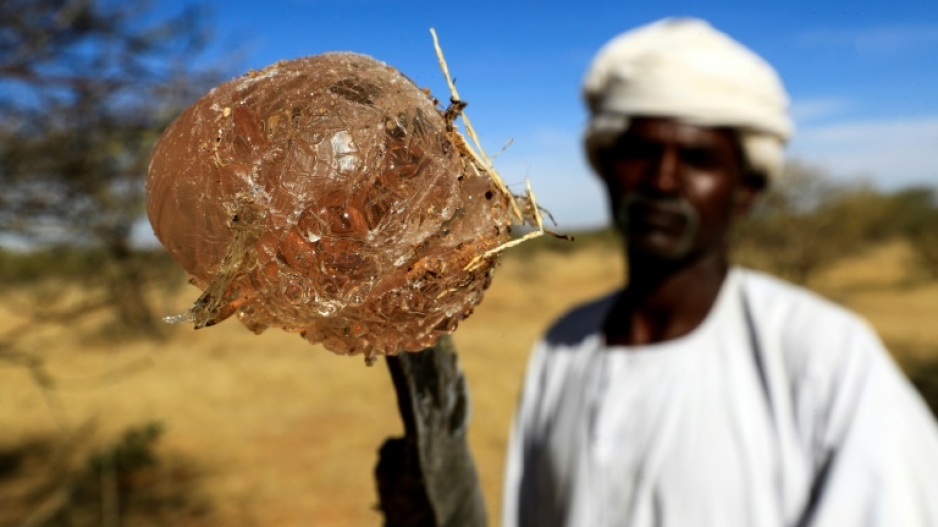 Sudanese exports of raw gum totalled $110 million in 2021, according to central bank figures, making it one of the country's key foreign exchange earners

Since South Sudan broke away a decade ago, taking with it its large oil reserves, gum arabic has been one of Sudan's main foreign currency earners.

Sudanese exports account for 70 percent of global gum supplies, according to AFD, the French agency for development.

Their importance to the world economy earned them a special exemption from the US trade embargo imposed during the three-decade rule of now-ousted strongman Omar al-Bashir.

Efforts have been made to counter deforestation by boosting farmers' incomes.

"We have been trying to replant trees in areas that experienced deterioration, and to prevent the gum arabic belt from receding," Ramly said.

Sudan's gum arabic belt covers about 500,000 square kilometres (193,000 square miles) from Gedaref in the east through Kordofan to Darfur on the border with Chad.

The FAO has launched a $10 million project with Sudan's forestry authority to support farmers and protect the trees. 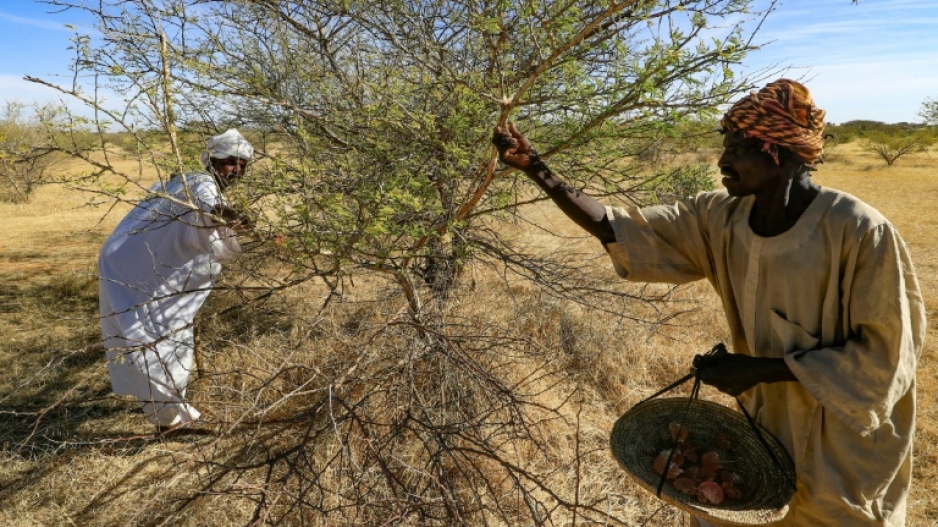 The project, which seeks to reforest 125,000 hectares (310,000 acres), is part of the wider Great Green Wall project, which aims to contain desert encroachment by planting trees from the Sahel to the Horn of Africa.

The challenge now is to persuade young people that they can make a living in gum production.

Almost "all of the people who are doing this job are over 60", Ramly said.