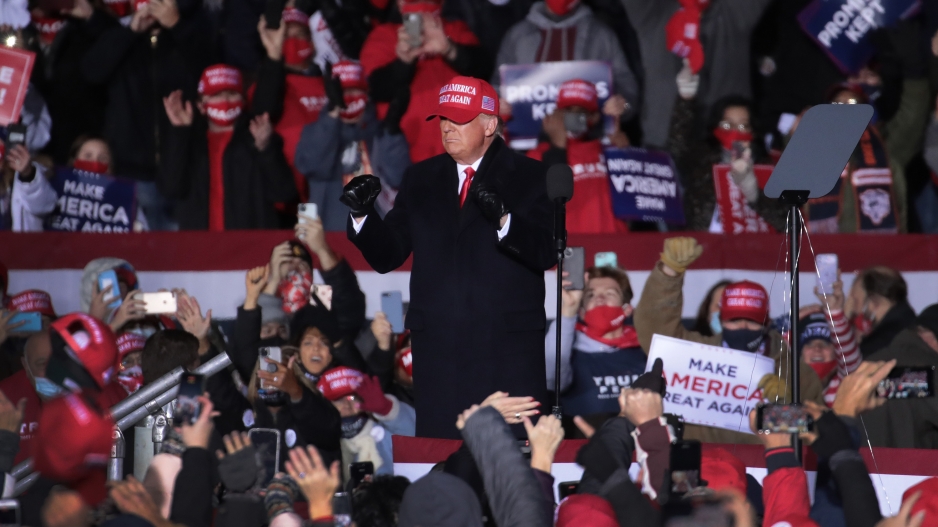 FILE: President Donald Trump speaks to supporters during a campaign rally at the Kenosha Regional Airport on November 02, 2020 in Kenosha, Wisconsin. Trump, who won Wisconsin with less than 1 percent of the vote in 2016, currently trails former vice president and Democratic presidential candidate Joe Biden in the state according to recent polls. (AFP)

GRANS RAPIDS - Normally, Republicans don't win Michigan -- but Donald Trump took the US state in a shocking upset four years ago. On Monday evening he headed back to the city of Grand Rapids -- exactly like in 2016 -- for the last rally of his reelection campaign, and possibly his political career.

Is it superstition? Well... yes.

"We finished up there four years ago," the president said at a rally in Kenosha, Wisconsin, ahead of his appearance in Grand Rapids. "I'm a little bit superstitious. Let's do it the same way."

"I heard he might be a little of that," said Melanie Thorwall, 63, who had been waiting since the morning so as not to miss the grand finale of the Trump 2020 campaign.

Along with her son, an engineer like her, Thorwall had been unable to enter the rally four years ago. Both nostalgically recall the emotion that night, the sense of watching a phenomenon.

Trump was the first Republican presidential candidate to take Michigan -- historically one of the sturdiest bricks in the Democrats' "blue wall" -- since 1988.

"Did you ever think you'd be hearing a major speech like in around close to one o'clock in the morning? Are we crazy? Is this crazy? It's crazy," he said at the time.

"You'll get up after about two hours, you'll vote and you'll go to work. I know my Michigan people," he added.

And his people came back Monday, hyped up by the idea of dealing the world another surprise four years on.

In a field, under cold sunlight, voters young and old waited in line, decked out in proof of their loyalty that has become de rigueur at Trump rallies: hats, T-shirts, flags. In one spot, a hoodie that says "Lesbians for Trump."

"He's the only man I would go straight for," joked the hoodie's owner, Abigail Wall. The 27-year-old came with her wife, and her mother Kolleen. Mother and daughter also attended the 2016 rally.

"Whether he wins or loses, this is history," said Kolleen. But "when you come to one of these rallies, all you think is, how could he not win?"

2016 Democratic presidential nominee Hillary Clinton was so sure of winning Michigan that she barely set foot in the state. She had added a last-minute rally in Grand Rapids on the last day -- prompting Trump to schedule his own.

Unlike in the American South, there is no Michigan county that votes 90 percent Trump. The electorate is more evenly divided, more moderate. Between Democratic apathy in the cities and the over-the-top enthusiasm of suburban and rural Republicans, Trump beat his opponent by 10,704 votes -- just 0.3 percent of the state total.

It's a land of unions and skilled labor, where carmakers Ford, General Motors and Chrysler cemented Detroit's reputation worldwide.

Grand Rapids, the second-largest city in the state, is better known for its furniture makers, and automotive suppliers specializing in plastics and air bags, whose buildings cut into the farmland that stretches to the shores of Lake Michigan, an hour to the west.

"I'm going to be coming back every time we open a new factory or automobile plant," Trump promised in 2016.

The Michigan manufacturing industry lost 5,000 jobs last year, plus 60,000 jobs due to the pandemic.

One of the big providers of new jobs is Amazon, whose owner Jeff Bezos is much reviled by Trump. The online retail giant opened a massive distribution center in Grand Rapids this year, and backhoes were digging in a field Monday, getting ready to build another.

Rick Bekins sold his land to Amazon for the new center. The house that he lived in for 19 years will be razed to build a parking lot.

"Four years later, I'm going to vote for him, because I don't have a better choice."