'Takes one to know one' Putin mocks Biden over 'killer' comment 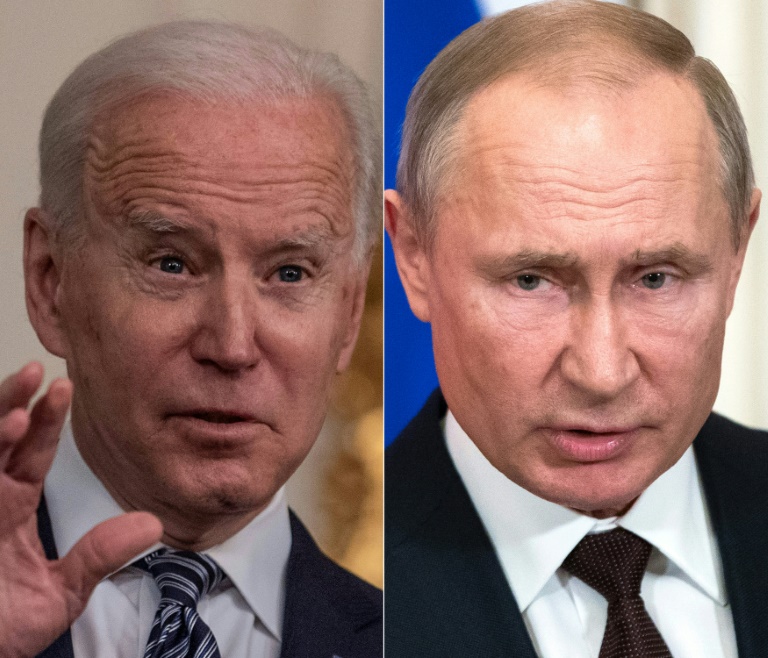 MOSCOW - Russian President Vladimir Putin on Thursday mocked Joe Biden for calling him a "killer" -- saying "it takes one to know one" -- as ties between Moscow and Washington sank to new lows.

US President Biden's comments sparked the biggest crisis between Russia and the United States in years, with Moscow recalling its ambassador for consultations and warning that ties were on the brink of outright "collapse".

But speaking during an event marking seven years since Russia's annexation of Crimea, Putin ruled out severing ties with the United States altogether and lobbed a jab at the 78-year-old US leader.

"We always see in another person our own qualities and think that he is the same as us," Putin said, referring to Biden's "killer" comment.

"It takes one to know one," Putin added, citing a saying from his Soviet-era childhood in Saint Petersburg.

"That's not just a children's saying and a joke. There's a deep psychological meaning in this."

Putin added that he wished Biden health. "I'm saying this without irony, not as a joke."

In the interview with ABC News on Wednesday, Biden said Putin would "pay a price" for trying to undermine his candidacy in the US election in 2020.

Asked if he thought Putin was "a killer", Biden replied: "I do."

His comments stood in stark contrast with his predecessor, Donald Trump, who was often accused of going soft on Putin.

In recent years Russia's relationship with Washington has gone from bad to worse, and there were calls in Moscow Wednesday for Russia to pause diplomatic relations.

Putin said Thursday however that Moscow would continue working with the United States on terms "beneficial" to Russia.

"We can defend our interests," Putin said. "And they will have to deal with it," he said.

"It is clear that he does not want to get the relationship with our country back on track," Peskov said.

"Since the Biden administration took office, the conversations that we have had with different representatives have made clear that there will be clear language in Washington on Russia," Maas said.

Moscow's embassy in Washington said ambassador Anatoly Antonov was set to depart for Russia on Saturday to discuss "ways to rectify Russia-US ties, which are in crisis".

The embassy warned that Washington had pushed bilateral ties to the brink.

"Certain ill-considered statements of high-ranking US officials have put the already excessively confrontational relations under the threat of collapse."

Moscow and Washington share a mutual distrust that flared after the Kremlin's annexation of the Crimean peninsula in 2014.

Ties deteriorated over Russia's alleged meddling in the US elections in 2016 and more recently when the West concluded that Russian opposition figure Alexei Navalny was poisoned last summer with a Soviet-designed nerve agent.

But the two countries have continued cooperation on issues of shared interest, including the Iran nuclear deal and the Afghanistan peace process.

The US Commerce Department announced this week it was toughening export restrictions imposed on Russia as punishment for Navalny's poisoning in August.

Over the past few decades Russia has rarely recalled its ambassadors.

READ: Biden warns US may miss deadline to exit Afghanistan

Moscow last summoned its envoy in the US in 1998 over a Western bombing campaign in Iraq.

In 2014, during the fallout after the annexation of Crimea, Putin refused to recall a Washington envoy even after then US President Barack Obama said that the Russian leader would pay for his Ukraine policies.

Putin at the time said recalling an envoy would be a "measure of last resort".

Political analyst Fyodor Lukyanov said that recalling the envoy in Washington would not be enough.

"Putting ties on ice completely, apart from the minimally necessary technical aspects, would be logical," he wrote in the Kommersant broadsheet.