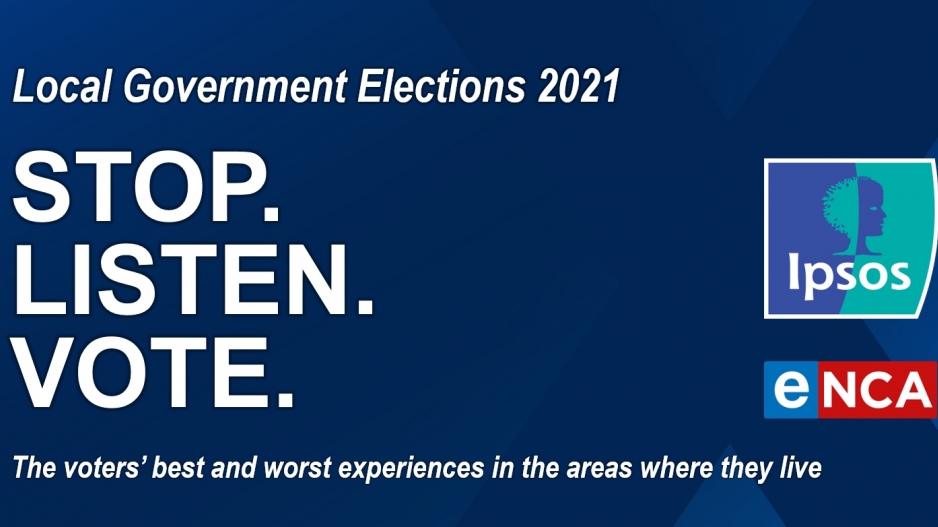 2021 Municipal Elections | The best and the worst of my area.

JOHANNESBURG - Research recently undertaken by Ipsos, on behalf of the eNCA, revealed these and other interesting findings about the South African electorate and prevailing opinions on local government. The study was undertaken between 9 and 14 October 2021 and made use of a CATI methodology (Computer Assisted Telephone Interviewing).

If we expect a countrywide medium voter turnout in the local government elections, about 14,6 million will draw their crosses on Monday. This figure represents only 34,3% of the total population eligible to vote.

Voter apathy will thus be a feature of this election, as it was in the last few elections. This is one of the most important findings of a recent pre-election study conducted by Ipsos, on behalf of eNCA.

Naturally, it will only be possible to do this calculation accurately after all the votes have been tallied and counted on Monday night and Tuesday morning, therefore we developed some possible turnout scenario’s (based on responses provided to several questions in the study).

Profile of voters in the medium voter turnout scenario

If about 56% of registered voters turn out to vote on Monday, women will be in the majority (53%) and 47% of voters will be men.

Young people will form a small proportion of the voters at the polls (6%), while other age groups will be more visible in the queues. 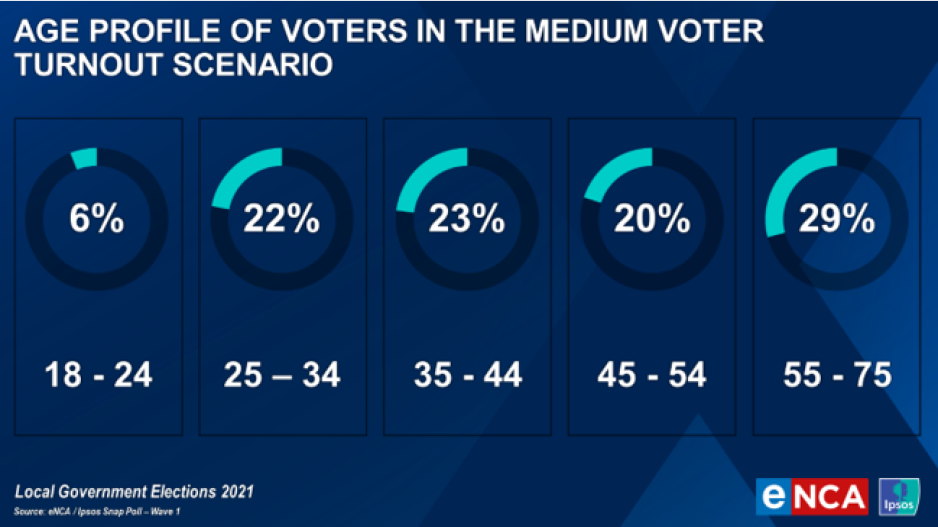 It is also a given that the turnout in all provinces won’t be the same: 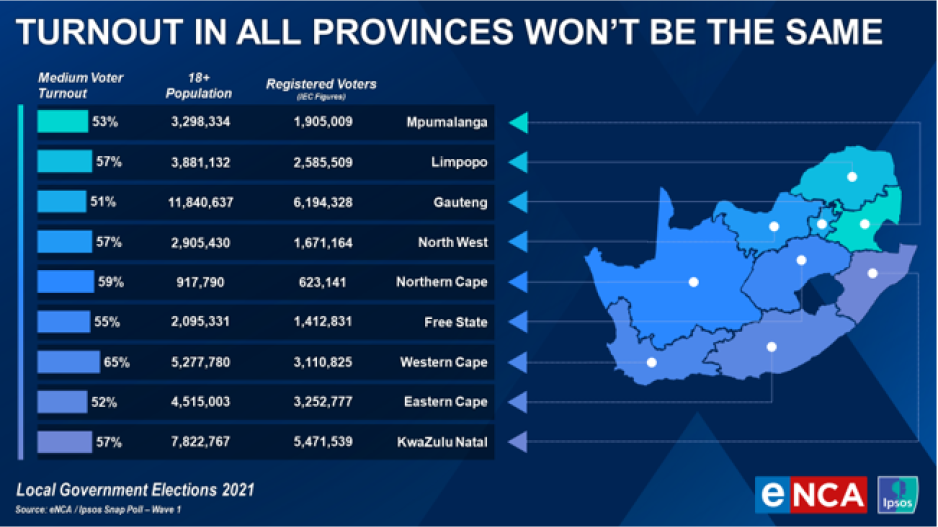 These results show that registered voters in the Western Cape are the most eager to vote, with two-thirds of them falling into the medium voter turnout category. The Western Cape is followed by the more rural provinces of the Northern Cape, Limpopo, NorthWest and then the densely populated

province of KwaZulu-Natal. Registered voters in the most populous province in the country, Gauteng, are also the most reluctant to vote and only 51% of them fall into the medium voter turnout category.

Turnout will be lower in the most contested metro’s

In keeping with this result of voter apathy in Gauteng, the turnout in the most contested metropolitan areas in this province, namely Tshwane and Johannesburg will only be at 50% in the medium voter turnout scenario.

But, in the other “contested” metropolitan area, Nelson Mandela Bay, it is expected that the turnout will only be 45% - even lower than in Tshwane and Johannesburg!

In a previous pre-election Ipsos study, voters have indicated that they do not trust politics or politicians or that they feel that their vote means nothing, as nothing changes after an election.

These feelings are rather strong amongst South Africans – as is clear from the below result that has been taken from a recent international Ipsos study. Although South Africa is not at the bottom of the list, only 10% of South Africans indicated that they thought that politicians were trustworthy. (Populations all over the world have a rather dim view of the trustworthiness of politicians.) 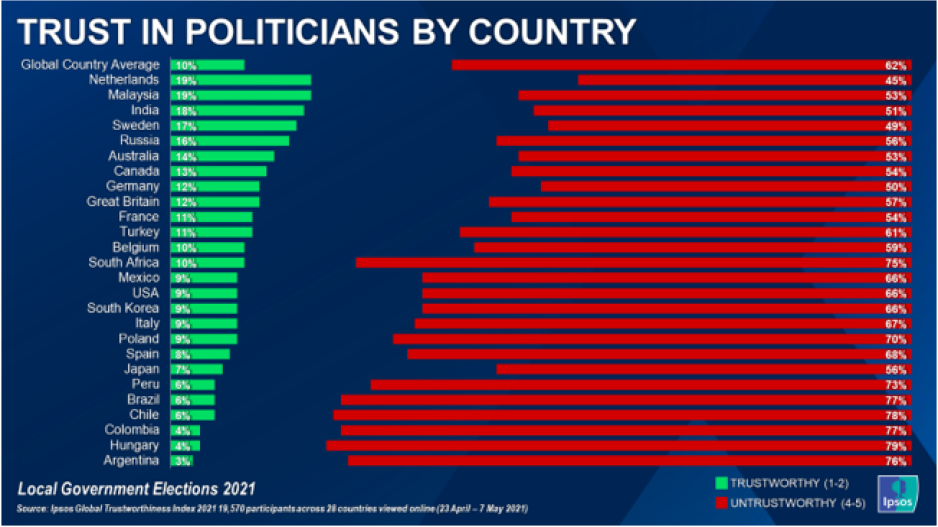 Some parties will be more successful in mobilising supporters

However, in this atmosphere of reluctance and mistrust the party or parties who can mobilise their supporters to turn up at the polls on 1 November will do relatively well.

From the results of the eNCA study it is clear that some political parties will be more successful than others to inspire their supporters to go and vote.  (These results still refer to the medium voter turnout scenario). 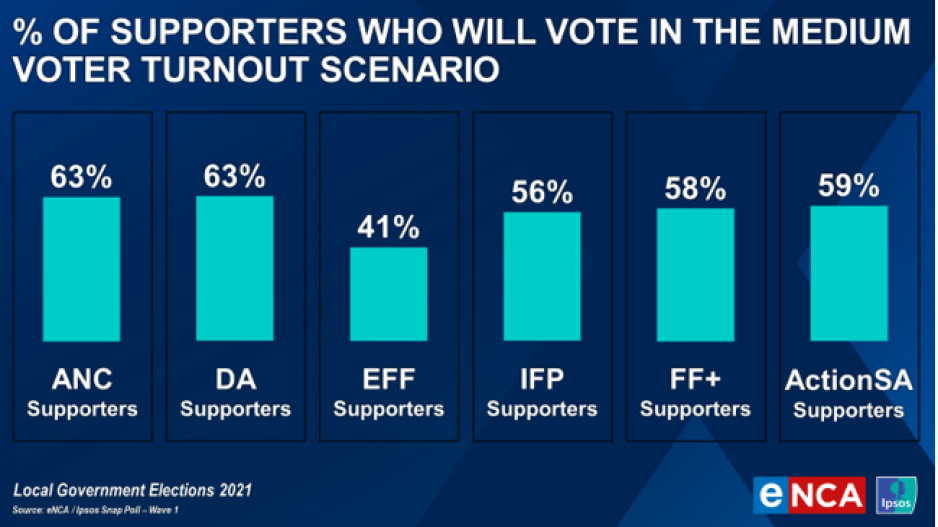