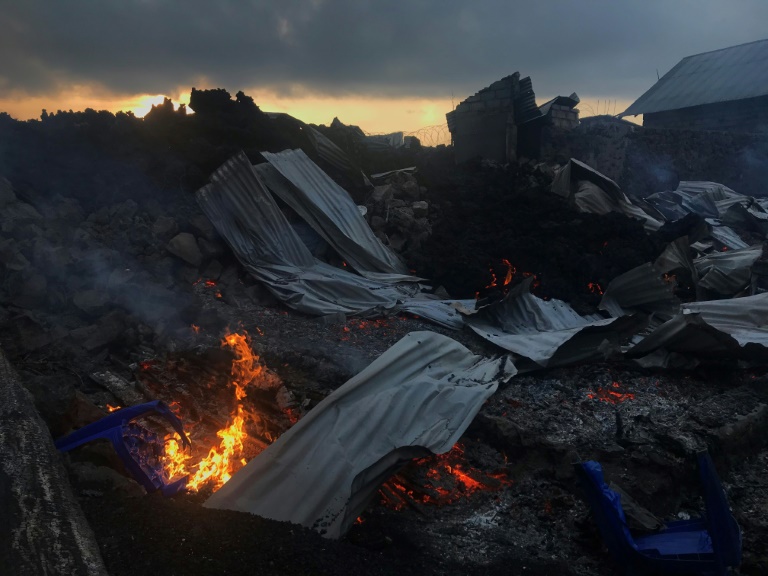 GOMA - Thousands have fled a volcanic eruption in the Democratic Republic of Congo, but the flaming lava from Mount Nyiragongo appeared to have come to a halt on the outskirts of Goma city early Sunday.

According to an AFP correspondent at the scene, the molten rock, which the eruption had sent close to Goma airport on the shores of Lake Kivu, still appeared unstable, but had come to a standstill in the suburbs of the eastern city.

And around a dozen earth tremors were felt in the early hours.

"People are beginning to return to their homes. The situation seems to have calmed down for the moment," one resident said.

"But people are still scared. The authorities still haven't made any official announcement so far this morning," he added.

Thousands had fled during the night and many families slept on pavements surrounded by their belongings under a night sky turned red by fire and fumes. 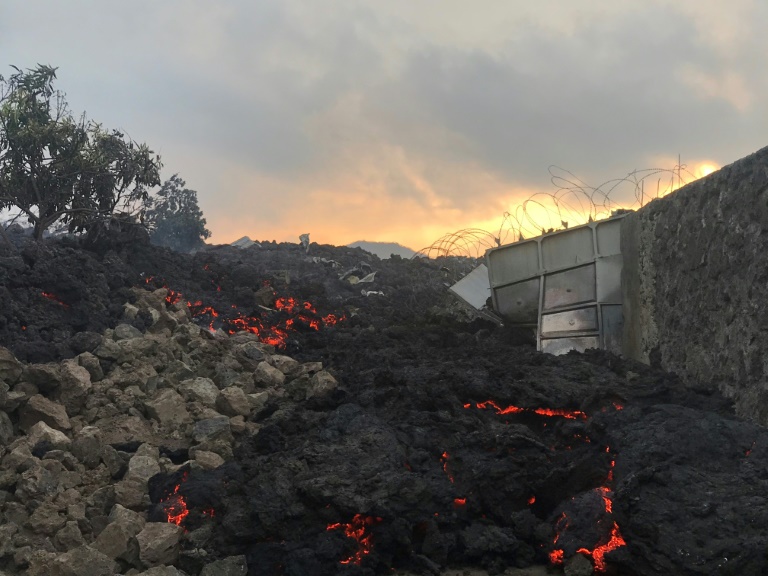 "There is a smell of sulphur. In the distance you can see giant flames coming out of the mountain," one resident, Carine Mbala, told AFP.

Officials said the lava had reached Goma city airport although residents said it had stopped at the edge of the facility.

"People are wondering whether the volcano has stopped, or whether it will continue, whether the lava will reappear," one resident said.

A few cars were on seen on the streets, but no police or military presence was visible.

"We're not convinced that the eruption is over in just a day. We're waiting," said one man. 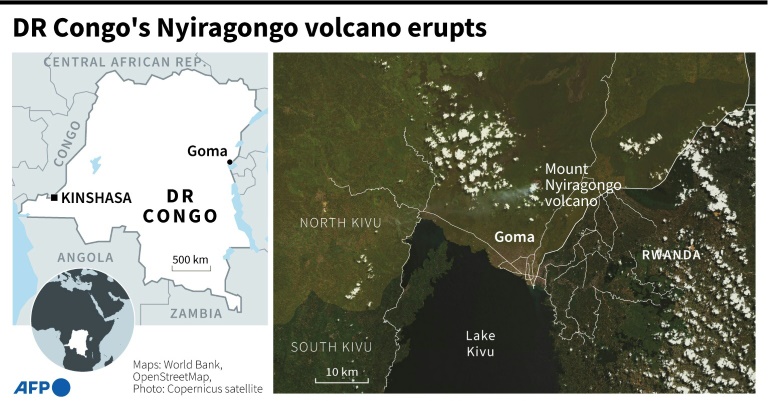 On Saturday, Communications Minister Patrick Muyaya had said that the government had activated an evacuation plan and was "discussing the urgent measures to take at present."

Congolese President Felix Tshisekedi had said he would "interrupt his stay in Europe to return home this Sunday to supervise the coordination of aid".

By early Sunday, between 5,000 and 7,000 people had arrived in neighbouring Rwanda, according to the country's national broadcaster.

The Rwanda Broadcast Agency tweeted photos of those arriving in Rubavu district, but said early Sunday that the evacuees had already begun heading home.

"At the moment, the Congolese who had evacuated into Rwanda because of the Nyiragongo volcanic eruption are returning to their homeland. It appears that the eruption has stopped," it tweeted.

The first departures from Goma city came even before the official confirmation that Mount Nyiragongo had erupted at around 7:00 pm Saturday, spewing red fumes into the night sky.

Power was already cut in large parts of the city when hundreds of residents began leaving their homes.

Some headed out of the southern end of the city towards the nearby border post with Rwanda, while others headed west towards Sake, in the neighbouring Congolese region of Masisi. 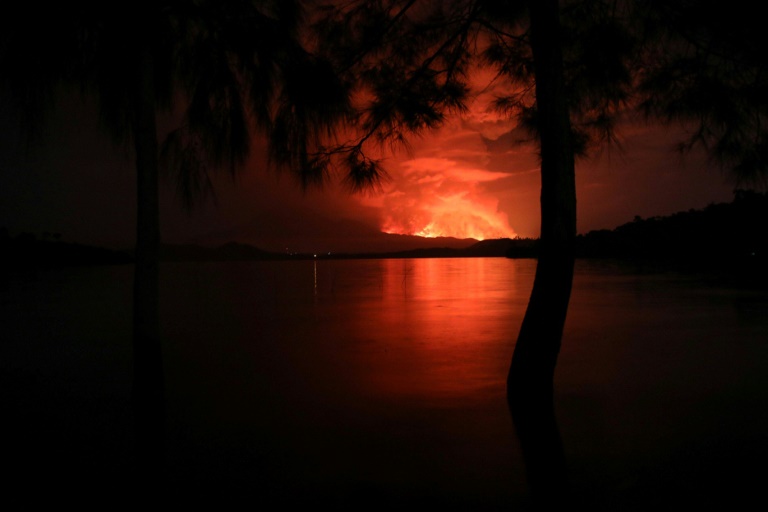 The last time Nyiragongo erupted was January 17, 2002, killing more than a hundred people and covering almost all of the eastern part of Goma with lava

Resident Richard Bahati said he was incredibly worried about the eruption: "I lived through this volcano problem in 2002.

"The volcano had devastated all our homes and all our possessions. That's why I'm scared again this time."

Electricity was cut off in a large part of the city, with thousands of people -- encumbered with mattresses, food and parcels -- heading towards the Rwandan border. 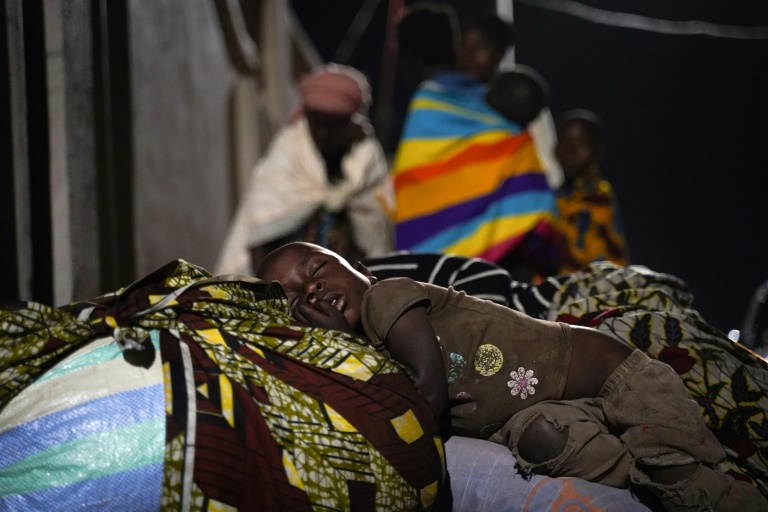 "We're not convinced that the eruption is over in just a day. We're waiting," said one resident

"There are a lot of people on the road, a lot of cars, it's an escape," one man with his family in his car told AFP.

"It is moving at a snail's pace, on three or four lanes," he said, adding: "There are children, women, old people who are on foot and the rain is coming. It's complicated."

Goma is home to a large contingent of peacekeepers and staff of MONUSCO, the UN mission in the country, as well as the base of many NGOs and international organisations.

Several planes, belonging to Monusco and private companies, took off in the evening, according to an airport source, with a local adding they had also seen the unusual nighttime activity.

In a May 10 report, the Goma Vulcanology Observatory warned that seismic activity around the volcano had increased and warranted careful monitoring. 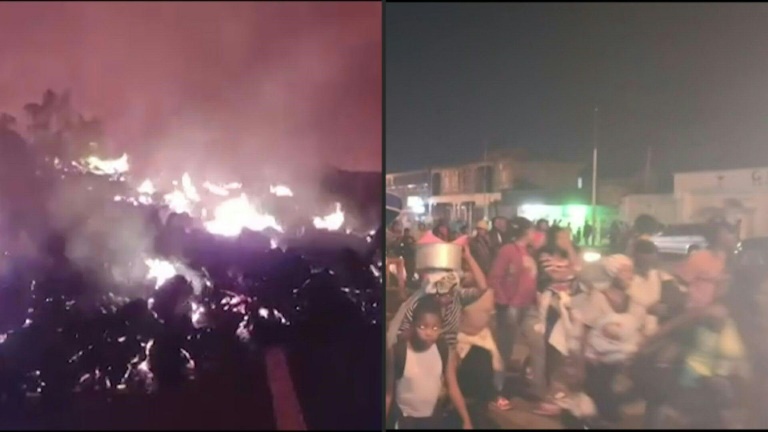 During that eruption, the victims were mostly sick or elderly abandoned to their fate in the northern districts of the city with some looting also taking place.