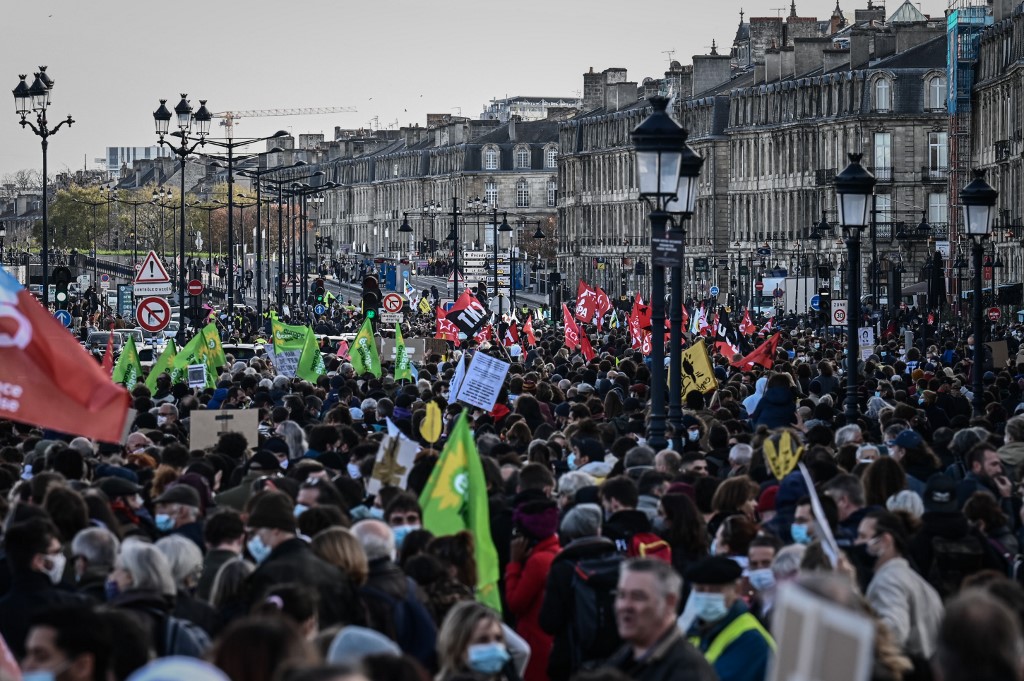 Protesters march in Paris on November 28, 2020 during a protest against the "global security" draft law, which Article 24 would criminalise the publication of images of on-duty police officers with the intent of harming their "physical or psychological integrity".

PARIS - Thousands took to the streets across France on Saturday to demand the government abandon a contentious new security law, in a controversy intensified by the beating and racial abuse of a black man by police officers that shocked the country.

The demonstrations against the security law -- which would restrict the right of the press to broadcast images of police officers' faces -- took place nationwide with the central Place de la Republique in Paris filled to the seams despite the coronavirus pandemic.

President Emmanuel Macron said late Friday that the images of the beating of black music producer Michel Zecler in Paris last weekend "shame us". The incident had magnified concerns about alleged systemic racism in the police force.

"Police everywhere, justice nowhere" and "police state" and "smile while you are beaten" were among the slogans brandished by protesters in the crammed Paris square.

The Paris authorities had demanded that organisers limit the rally to a single location, but on Friday evening officials authorised a march from Place de la Republique to the nearby Place de la Bastille.

An investigation has been opened against the four police-involved but commentators say that the images -- first published by the Loopsider news site -- may never have been made public if the contentious Article 24 of the security legislation was made law.

The article would criminalise the publication of images of on-duty police officers with the intent of harming their "physical or psychological integrity". It was passed by the National Assembly although it is awaiting Senate approval.

Under the article, offenders could be sentenced to up to a year in jail, and fined 45,000 euros ($53,000) for sharing images of police officers.

The controversy over the law and police violence is developing into another crisis for the government as Macron confronts the pandemic, its economic fallout and a host of problems on the international stage.

In a sign that the government could be preparing to backtrack, Prime Minister Jean Castex announced Friday that he would appoint a commission to redraft Article 24.

But he was forced into a U-turn even on this proposal after parliament speaker Richard Ferrand -- a close Macron ally -- accused the premier of trying to usurp the role of parliament.

The government says the provision is intended to protect officers from online abuse and has been intensely lobbied for by police representatives.

But media unions say it could give police a green light to prevent journalists -- and social media users -- from documenting abuses such as those against Zecler.

For critics, it is further evidence the slide to the right of Macron, who came to power in 2017 as a centrist promising liberal reform of France.

The issue has also pressured Macron's high-flying right-wing Interior Minister Gerald Darmanin -- who was promoted to the job this summer despite being targeted by a rape probe -- with Le Monde saying tensions were growing between him and the Elysee.

The images of the beating of Zecler emerged days after the police were already under fire over the forcible removal of a migrant camp in central Paris.

A series of high-profile cases against police officers over the mistreatment of black or Arab citizens has raised accusations of institutionalised racism. The force has insisted violations are the fault of isolated individuals.

In a letter seen by AFP, Paris police chief Didier Lallement wrote to officers to tell them: "In the coming days, the coming weeks... there's no doubt you will face difficulty, doubt, even anger and fear."

But he insisted that he could "count on the integrity, sense of honour and ethics" in the force.

City officials in southern Montpellier said 3,800 people were demonstrating Saturday, more than double the number who attended a march a week ago, while organisers said there were 5,000 people.

"I'm just waiting for the law to be withdrawn, said Adele Lequertier, a 22-year-old sociology student, who took part in the Montpellier march.