Thunberg rallies climate activists for German vote 'of a century' 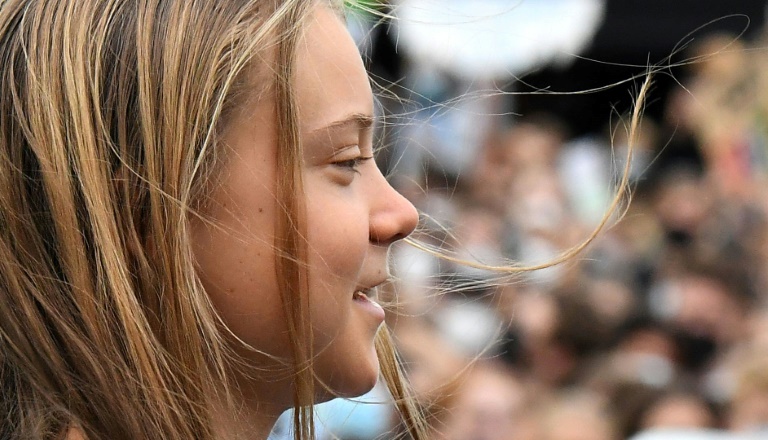 Greta Thunberg speaks at a rally in Berlin, saying "no political party is doing close to enough" on climate change

Hundreds of thousands of climate activists, including Greta Thunberg, rallied in cities across Germany Friday ahead of weekend elections as frontrunner Olaf Scholz called for a "change of government" after 16 years of Angela Merkel at the top.

Speaking at a rally in front of the Reichstag parliament building in the run-up to Sunday's poll, Thunberg told cheering Fridays for Future youth supporters that they needed to hold Germany's political leaders to account past election day.

"It is clearer than ever that no political party is doing close to enough... not even their proposed commitments are close to being in line with what would be needed to fulfil the Paris Agreement" on curbing climate change, she said.

"Yes, we must vote, you must vote, but remember that voting only will not be enough. We must keep going into the streets."

Organisers said the rallies had drawn 620,000 people to more than 470 cities in towns across the country. 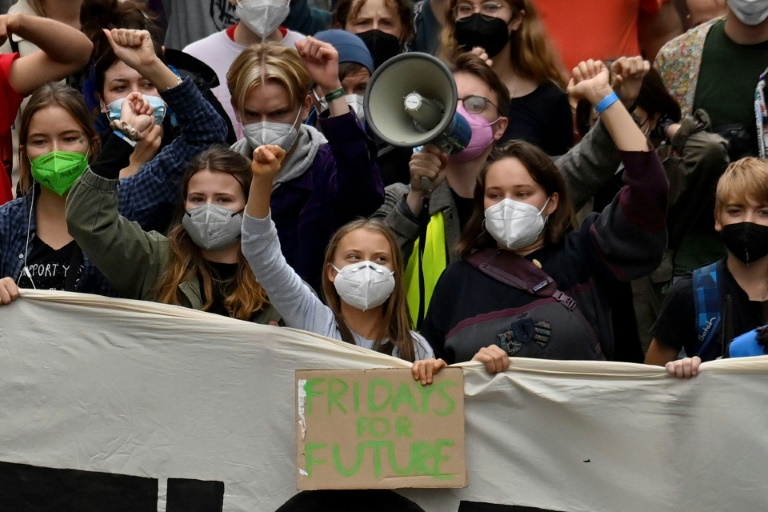 "Remember that voting only will not be enough," Thunberg told the crowds. "We must keep going into the streets."

The head of Fridays for Future's German chapter said the country, one of the world's top emitters of greenhouse gases, had an outsize responsibility to set an example, with time running out to reverse destructive trends.

"That is why we are calling this the election of a century," Luisa Neubauer told AFP.

The race has boiled down to a two-way contest between Social Democrat (SPD) Scholz, the centrist finance minister, and Armin Laschet from Merkel's conservative Christian Democrats.

Polls give Scholz a small lead of about 25 percent over Laschet at around 22 percent, with the candidate from the ecologist Greens, Annalena Baerbock, trailing in the mid-teens. 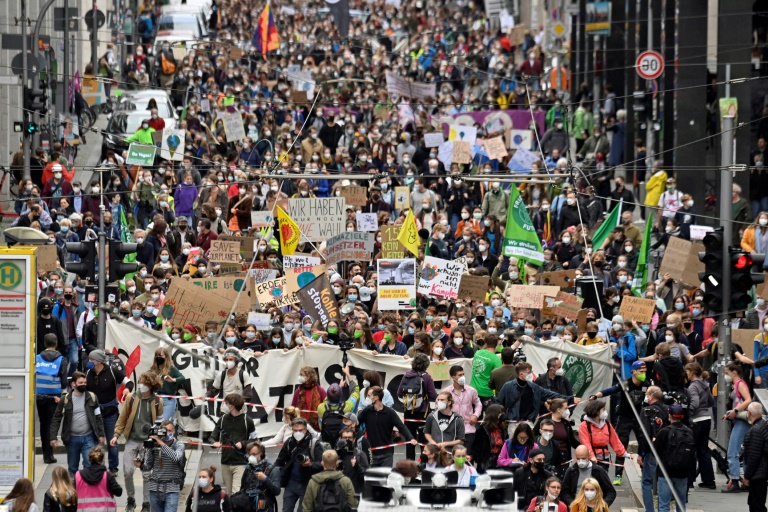 Organisers said the rallies had drawn 620,000 people to more than 470 cities in towns across the country

"We need a fresh start for Germany and we need a change of government and we want an SPD-led government," Scholz, also vice chancellor under Merkel, told supporters in the western city of Cologne.

All three leading parties have said they aim to implement a climate protection agenda if elected, with the Greens presenting the most ambitious package of measures.

Baerbock, who joined one of the Fridays for Future rallies in Cologne, told Die Welt newspaper that she hoped the protests would give her party "tailwinds" heading into the vote.

"The next government has to be a climate government -- that will only work with a strong Green party."

More than 400 "climate strikes" were taking place across Germany on Friday. Thousands gathered on the lawn there from late morning bearing signs reading "Climate now, homework later", "It's our future" and simply "Vote".

"Climate is an important issue and if this continues things are going to get worse and worse," 14-year-old Louise Herr told AFP. 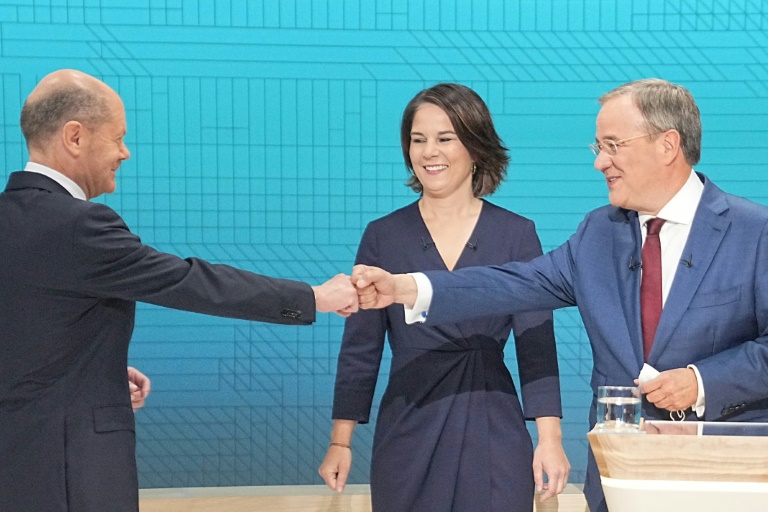 The German protests are part of a global climate strike in more than 1,000 communities around the world, Fridays for Future said.

Their central demand is to limit the warming of the Earth to a maximum of 1.5 degrees Celsius as laid out in the 2015 Paris climate accord.

Despite Merkel's vocal support of climate protection measures, Germany has repeatedly failed to meet its emission reduction targets under the pact.

In a landmark ruling in April, Germany's constitutional court found the government's plans to curb CO2 emissions "insufficient" and placed an "unfair burden" on future generations. 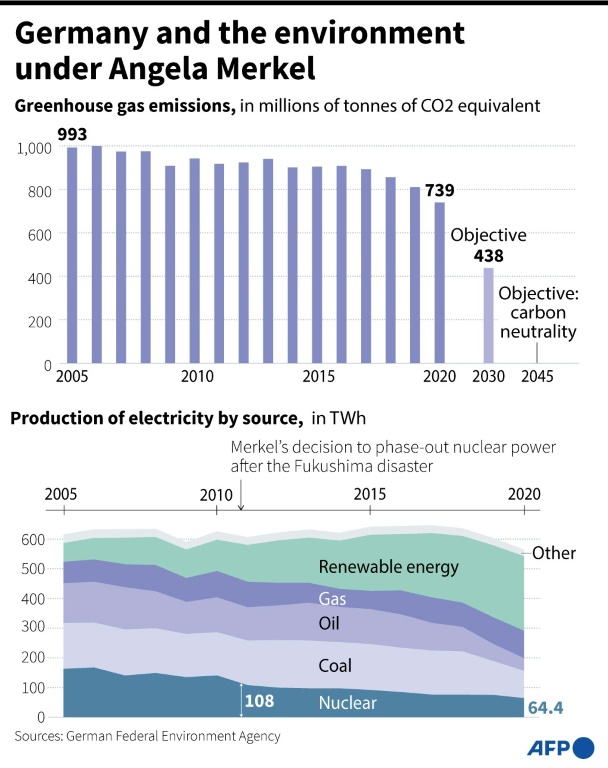 Germany and the environment under Angela Merkel

In September 2019, the Fridays for Future climate movement drew huge crowds in cities and towns around the world, including 1.4 million protesters in Germany, according to organisers.

Around 60.4 million Germans are called to the polls on Sunday and most voters cite climate protection among their top priorities.

Despite environmental pledges from all parties, the Fridays for Future activists have said the Greens' official programme falls short of what is needed to keep the temperature rise to 1.5 degrees Celsius.

The Greens want to end coal energy use by 2030 instead of the planned 2038 and end the production of combustion engine cars the same year. 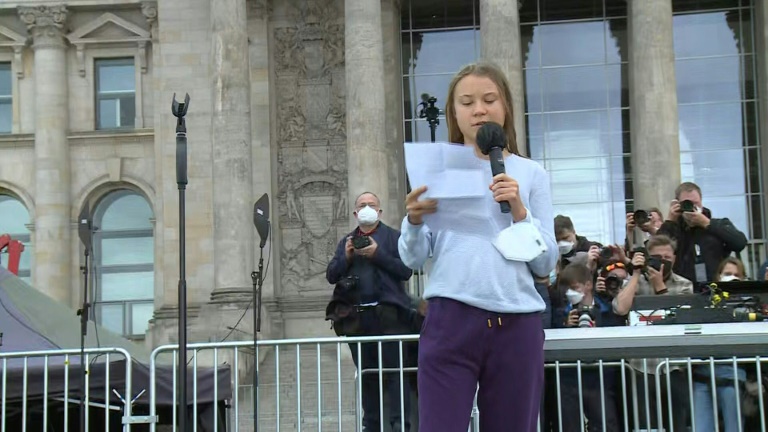