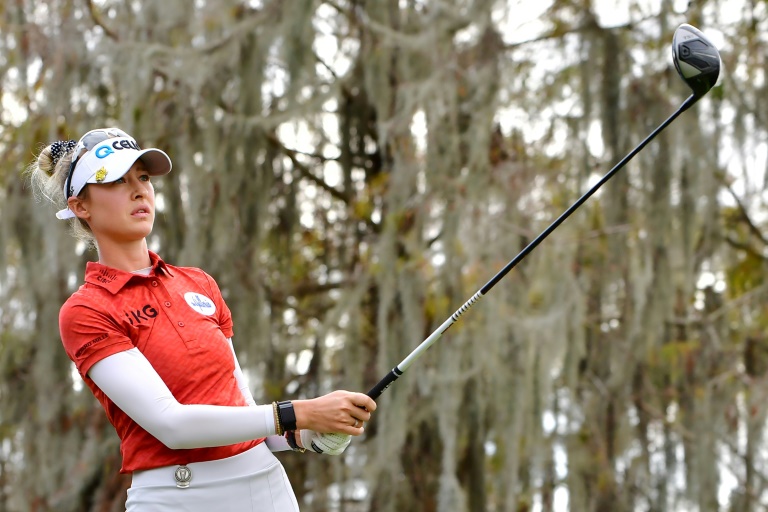 American Nelly Korda tees off on 18 on the way to the halfway lead in the LPGA Tournament of Champions in Orlando, Florida. AFP/Julio Aguilar/Getty Images

ORLANDO - World number one Nelly Korda fired seven birdies in a six-under-par 66 to take a one-shot lead in the US LPGA Tournament of Champions in Orlando, Florida.

After a roller coaster 68 on Thursday that left her one off the pace, Korda looked dialled in, bouncing back from her lone bogey of the day at the fifth with birdies at the seventh and ninth to make the turn three-under for the day.

The American, who won her first major title last year in the KPMG Women's PGA, picked up three more strokes coming in, moving atop the leaderboard with a 17-foot birdie putt at 18 that put her at 10-under par 134 after two rounds at Lake Nona Golf and Country Club.

"I missed probably a 10-footer for birdie on 17, which I was disappointed with, but it was nice to roll that one in on 18 going into the weekend," Korda said.

She was one stroke in front of 2017 Women's PGA champion Danielle Kang and first-round leader Gaby Lopez of Mexico.

Kang holed out for eagle at the seventh, her seven-iron from 155 yards finding the cup to kickstart her round.

"I was having a little bit of a slow start," said Kang, who said she gave herself a string of good birdie looks on the front nine, but couldn't get the putts to drop.

"I wanted to hit it really close on seven," she said When she saw the ball tracking toward the pin she said she wanted it to go close so she wouldn't have much of a putt.