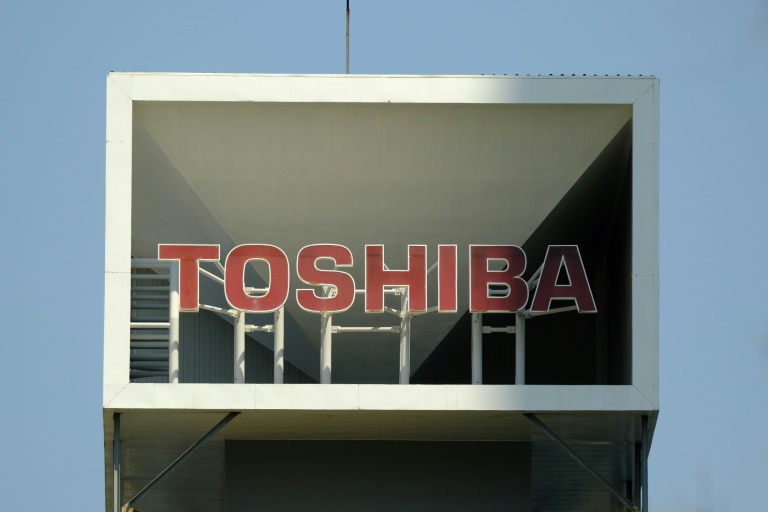 Toshiba has been rocked by turbulence in recent years, facing scandals and losses before staging a recovery. AFP/Kazuhiro Nogi

TOKYO - Toshiba announced a return to an annual net profit and stressed it would consider "credible" buyout offers after a proposal from a private equity fund stirred turmoil within the storied Japanese firm.

The conglomerate -- once a shining symbol of Japan's advanced technology and economic power -- has been rocked by turbulence, facing scandals and losses before staging a recovery.

It rejoined the prestigious first section of the Tokyo Stock Exchange in January after sweeping restructuring and on Friday logged a net profit of 114.0 billion yen ($1.0 billion) for 2020-21, beating its target.

"In Japan, though the pandemic has suppressed consumer spending, capital investment has been improving and exports have increased," the firm said.

In 2019-20 it had reported a net loss of 114.6 billion yen, still an improvement from the painful lows seen in recent years.

On Friday, Toshiba announced plans to create a "strategic review committee", independent from management, to strengthen governance and communicate board decisions -- including discussions over buyout proposals -- to shareholders.

Nobuaki Kurumatani stepped down as CEO last month in a shock move as board members raised questions about the buyout offer from private equity fund CVC Capital Partners, reportedly in excess of $20 billion.

Kurumatani had previously headed Japanese operations at CVC -- although Toshiba says claims of a conflict of interest are not related to his departure.

Following Kurumatani's resignation, Toshiba said on April 20 that it was "not possible" to evaluate CVC's initial proposal because it lacked detail.

Toshiba on Friday reiterated a pledge to evaluate solid buyout offers, saying "the board will seriously consider and evaluate any credible offers, objectively viewed, a bona-fide and concrete offer of acquisition".

"We believe the process and content of such a proposal must satisfy our many stakeholders, including shareholders."