NASA's Perseverance rover ready to search for life on Mars 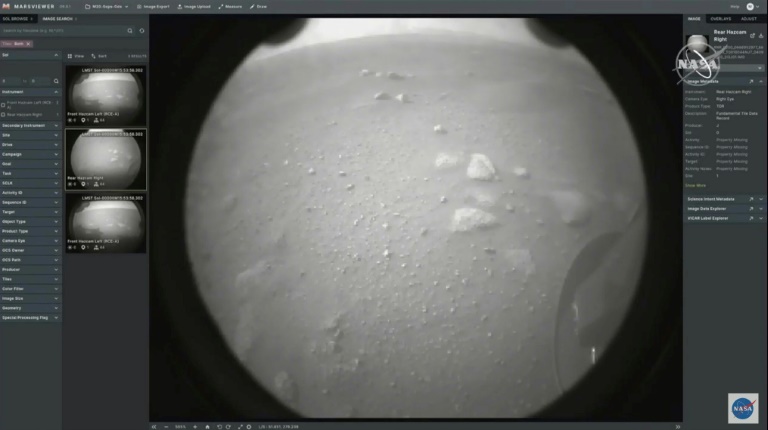 This NASA photo shows NASA’s first image from the Perseverance rover as it landed on the surface of Mars on February 18, 2021. NASA/AFP | Handout

WASHINGTON - After seven months in space, NASA's Perseverance rover overcame a tense landing phase with a series of perfectly executed manoeuvres to gently float down to the Martian soil Thursday and embark on its mission to search for signs of past life.

The autonomously guided procedure was in fact completed more than 11 minutes earlier, the length of time it took for radio signals to return to Earth. 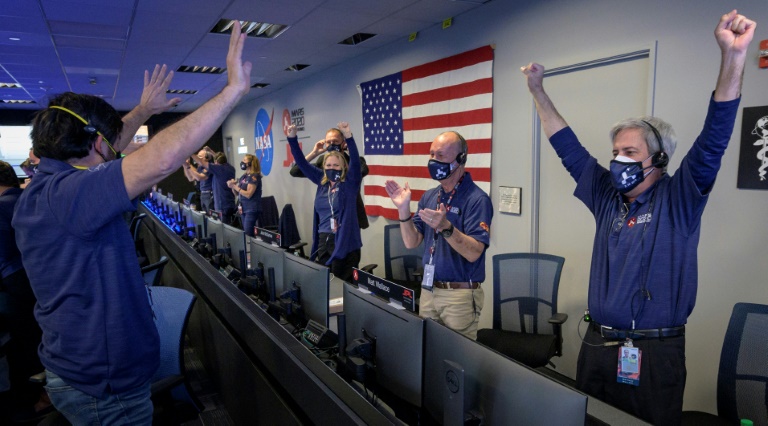 Shortly after landing, the rover sent back its first black-and-white images, revealing a rocky field at the landing site in the Jezero Crater, just north of the Red Planet's equator.

More images, video of the descent and perhaps the first sounds of Mars ever recorded by microphones are expected in the coming hours as the rover relays data to overhead satellites.

"Today proved once again that with the power of science and American ingenuity, nothing is beyond the realm of possibility," he tweeted.

During a press call, NASA Associate Administrator Thomas Zurbuchen theatrically tore up the landing phase's contingency plan, to emphasize how well things had gone, and admitted he violated Covid protocol by hugging people because of the emotions of the moment.

Over the coming years, Perseverance will attempt to collect 30 rock and soil samples in sealed tubes, to be eventually sent back to Earth sometime in the 2030s for lab analysis. 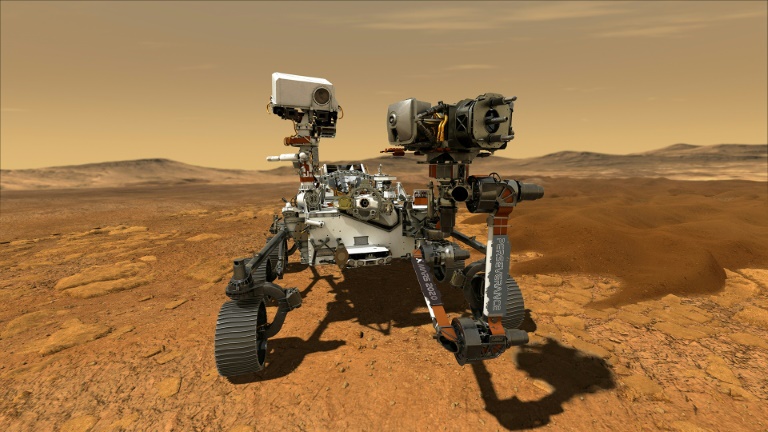 NASA's Perseverance rover will attempt to collect 30 rock and soil samples in sealed tubes, to be eventually sent back to Earth sometime in the 2030s for lab analysis

About the size of an SUV, the craft weighs a ton, is equipped with a seven foot- (two meter-) long robotic arm, has 19 cameras, two microphones and a suite of cutting-edge instruments to assist in its scientific goals.

Before it could set out on its lofty quest, it first had to overcome the dreaded "seven minutes of terror" -- the risky entry, descent and landing phase that has scuppered nearly half of all missions to Mars.

The spacecraft carrying Perseverance careened into the Martian atmosphere at 12,500 miles (20,000 kilometers) per hour, protected by its heat shield, then deployed a supersonic parachute the size of a Little League field, before firing up an eight-engined jetpack.

Finally, it lowered the rover carefully to the ground on a set of cables.

Allen Chen, lead engineer for the landing stage, said a new guidance system called "Terrain Relative Navigation," which uses a special camera to identify surface features and compare them to an onboard map, was key to landing in a rugged region of scientific interest.

"We are in a nice flat spot, the vehicle is only tilted by about 1.2 degrees," he said. "We did successfully find that parking lot, and have a safe rover on the ground."

Scientists believe that around 3.5 billion years ago the crater was home to a river that flowed into a deep lake, depositing sediment in a fan-shaped delta.

Perseverance ended up landing about two kilometers (a mile) southeast of the delta, NASA scientist Ken Farley said, in a geologically significant area. 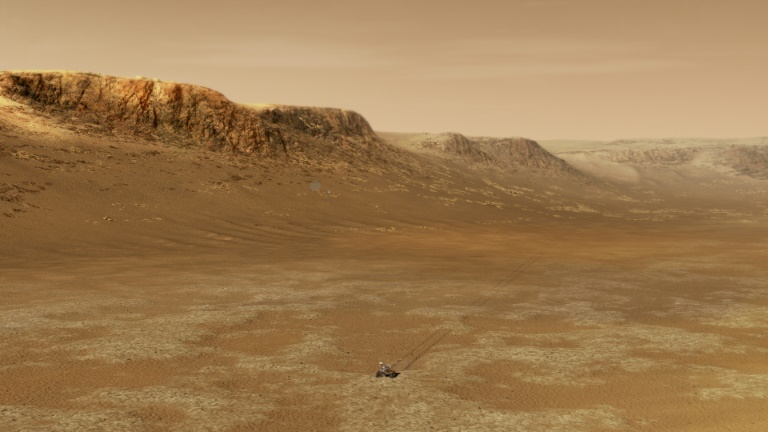 Scientists believe that around 3.5 billion years ago, the Jezero Crater was home to a river that flowed into a lake, depositing sediment in a fan shape known as a delta

Mars was warmer and wetter in its distant past, and while previous exploration has determined the planet was habitable, Perseverance is tasked with determining whether it was actually inhabited.

It will begin drilling its first samples in summer, and along the way it will deploy new instruments to scan for organic matter, map chemical composition and zap rocks with a laser to study the vapor. 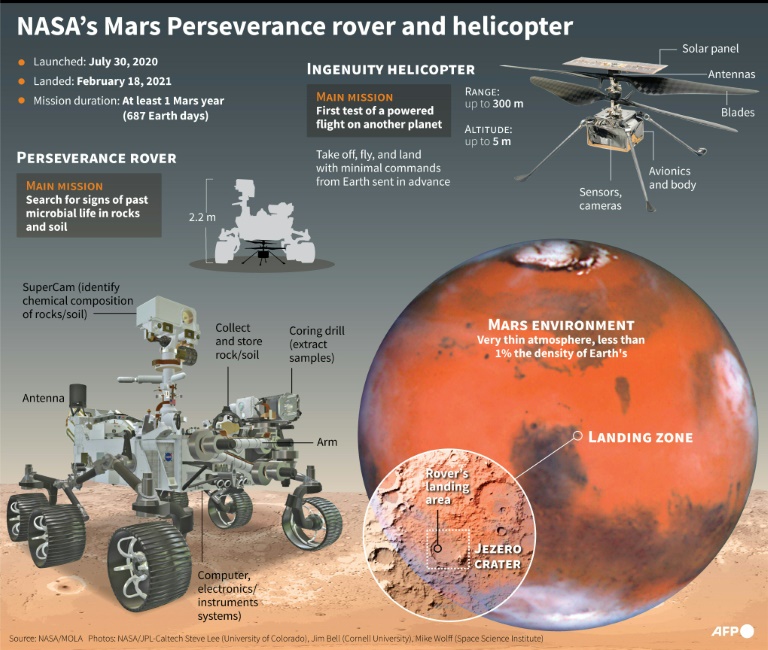 Despite the rover's state-of-the-art technology, bringing samples back to Earth remains crucial because of anticipated ambiguities in the specimens it documents.

For example, fossils that arose from ancient microbes may look suspiciously similar to patterns caused by precipitation.

- Flying on another world - 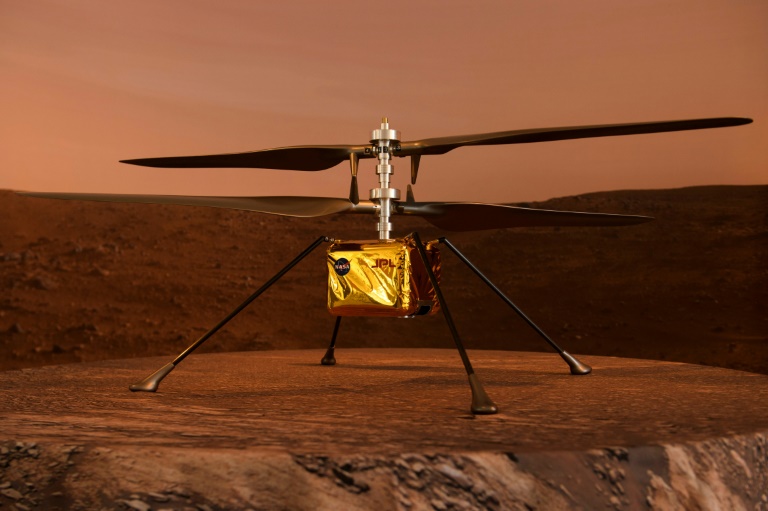 A full scale model of the experimental Ingenuity Mars Helicopter, which will be carried under the Mars 2020 Perseverance rover, is displayed at NASA's Jet Propulsion Laboratory

Before getting to the main mission, NASA wants to run several eye-catching experiments.

Tucked under Perseverance's belly is a small helicopter drone that will attempt the first powered flight on another planet in a few weeks' time.

Dubbed Ingenuity, it will have to achieve lift in an atmosphere that's one percent the density of Earth's, a demonstration of concept that could revolutionize the way humans explore other planets

Another experiment involves an instrument that can convert oxygen from Mars's primarily carbon dioxide atmosphere, much like a plant.

The idea is that humans eventually won't need to carry their own oxygen on hypothetical future trips, which is crucial for rocket fuel as well as for breathing. 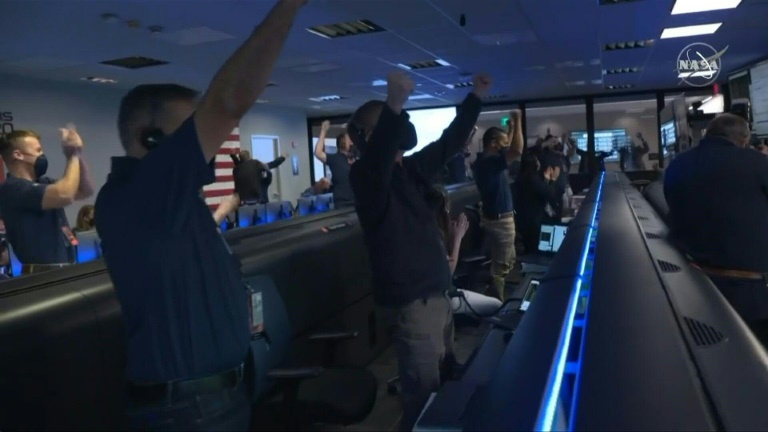 The US is also preparing for an eventual human mission to the planet sometime in the 2030s, though planning remains very preliminary.

By Issam Ahmed And Lucie Aubourg