The Airlines Association of Southern Africa is worried about the new travel restrictions. It comes after the new Omicron variant was detected in South Africa, Botswana, Hong Kong and Belgium. The association now wants the bans lifted. Aaron Munetsi unpacks this. Courtesy #DStv403

JOHANNESBURG - Anxious-looking travellers thronged OR Tambo airport and stood in long queues on Friday, desperate to squeeze onto the last flights to countries that had just shut their doors to South Africa.

Many cut short their holidays, rushing back from safaris and vineyards when Britain announced on Thursday night that all flights from South Africa and its neighbours would be banned the following day.

A flurry of nations -- including the US, Canada and several European countries -- have followed suit, concerned about the discovery of a new coronavirus variant, renamed Omicron, with a large number of mutations fuelling an infection resurgence in South Africa.

UK citizen Toby Reid, a 24-year-old trader in London, was camping on Cape Town's Table Mountain with his girlfriend when the ban was announced.

"At about 5.30am we got up to see if we could catch the sunrise, and at six in the morning we found out that there was still a possibility to get back," he told AFP, standing in line for check-in at the Johannesburg airport just hours later.

The couple managed to grab the two last seats on an evening flight to Frankfurt.

Others who were not so lucky discussed options at ticket counters, eyes widening at proposed prices and convoluted itineraries.

"There should have been more notice," muttered Christian Good, returning to Devon via Frankfurt with his husband after a beach holiday.

By chance, the pair had originally planned to return on that flight, meaning they would arrive home before mandatory hotel quarantine begins on Sunday -- a requirement for citizens returning from "red list" countries.

"It's ridiculous, we will always be having new variants," his husband David exclaimed, passports in hand.

"South Africa found it but it's probably all over the world already," he told AFP.

The variant has so far been detected in Belgium, Botswana, Israel and Hong Kong. 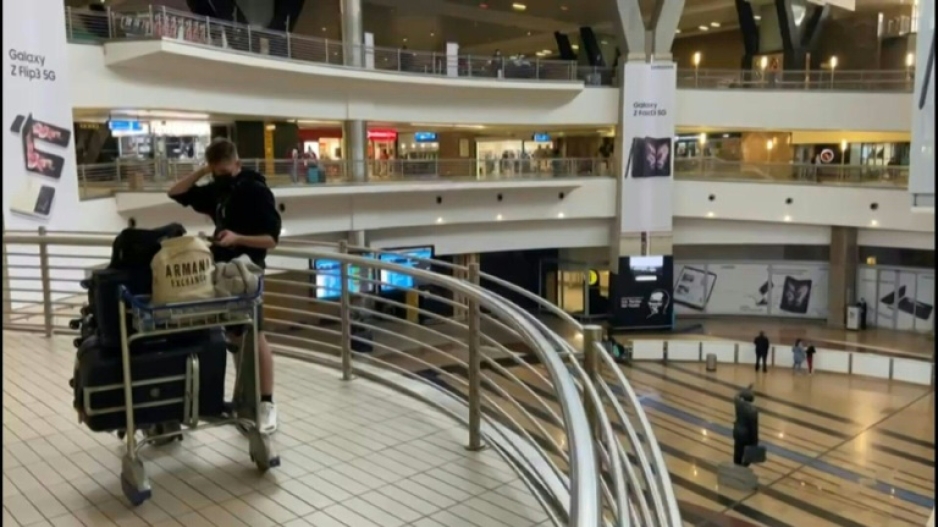 At the airport, red "cancelled" signs flashed next to London-bound flights listed on the departures board.

Other destinations were still in limbo.

A KLM flight to Amsterdam was delayed by several hours after passengers were suddenly compelled to produce negative Covid-19 results.

Rapid PCR tests were offered at the airport with results guaranteed in two hours, but at a cost of $86, instead of the standard fee of around $52 for results delivered in around 12 hours.

Some African passport holders were seen being told they would not be allowed to fly to Europe, an AFP correspondent saw.

Earlier, travellers milled around a closed Air France check-in desk, waiting to find out whether an evening flight to Paris would take off as scheduled, just hours after France announced its own ban.

Among them were UK citizen Ruth Brown, who lives in South Africa and had planned to return home for the first time since 2019 next week.

Britain kept South Africa on its red list until early October, meaning many of its citizens have been unable to travel back since the pandemic started because of the costly hotel quarantine.

They only had a few weeks of leeway before the status was revoked.

"We are tired of this situation," said Brown, who spent the morning on the phone trying to change her flight.

"Apparently (this one) is full but we are trying to see if we can still get seats," she sighed.

Further down the line, a fair-haired woman who introduced herself as Elke Hahn cradled a toddler.

She had travelled to South Africa with her partner to adopt the child and was desperate to get back to their home in Austria.

"We will have to get another flight but I don't know how that will work," she said.

- by Sofia Christensen and Dimitri Korczak