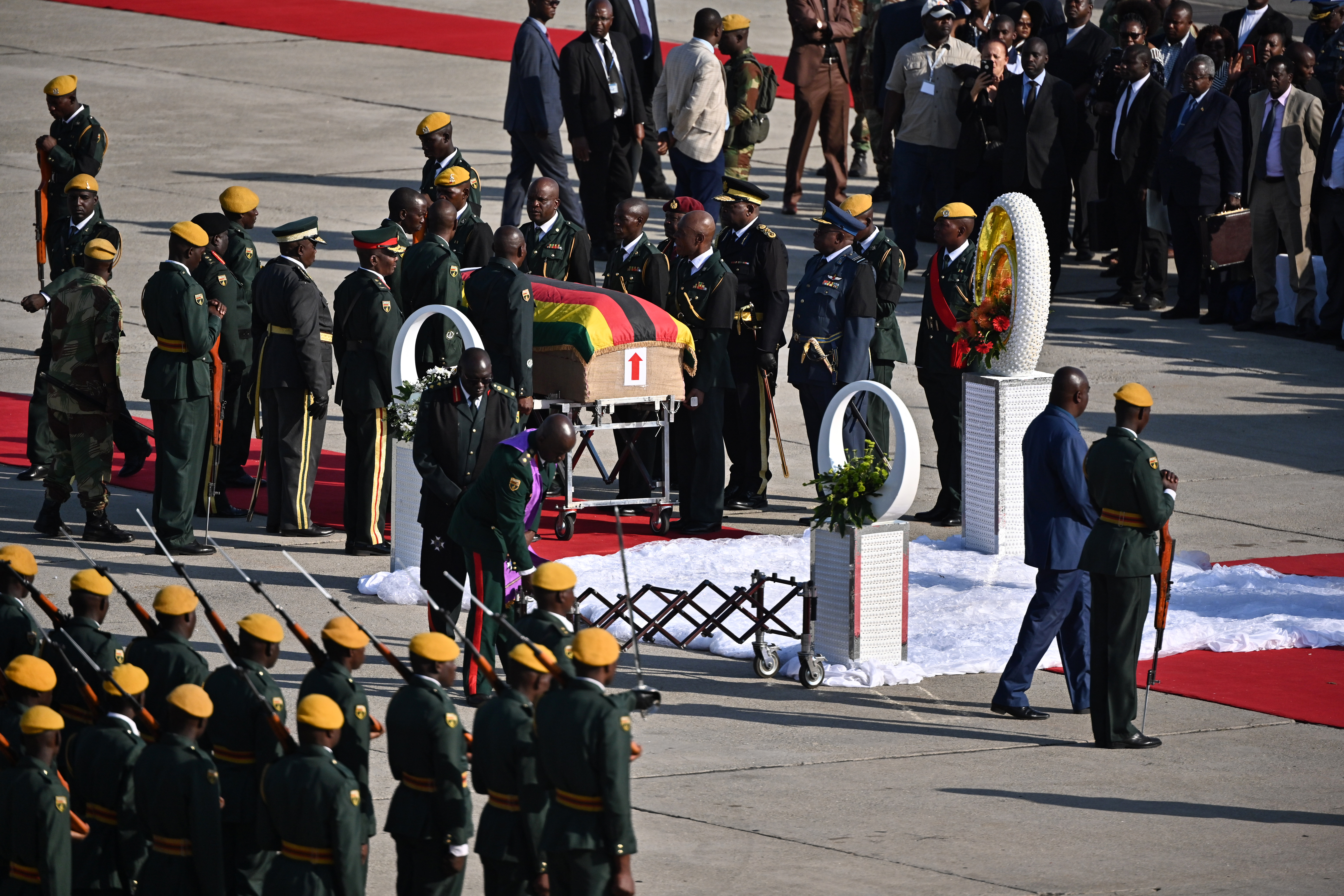 Pall bearers stand by the casket of late Zimbabwean President Robert Mugabe as its arrives in Harare on September 11, 2019. The body of Zimbabwe's ex-president, Robert Mugabe, arrived home on September 11, 2019 for burial in a country divided over the legacy of a former liberation hero whose 37-year rule was marked by repression and economic ruin.

HARARE - As public wakes for late Zimbabwean leader Robert Mugabe have drawn to a close, traditional chiefs are demanding the body be buried according to spiritual traditions.

Those requests have been part of a dispute over the final burial of Mugabe, who died September 6 almost two years after a coup ended his increasingly autocratic 37-year rule.

He died during a medical trip to Singapore aged 95, leaving Zimbabweans torn over the legacy of a man who some still laud for his role as a colonial-era liberation hero.

Mugabe's burial has already been caught up in a dispute between his family -- who wanted to bury him at his rural homestead Zvimba -- and the government, which pushed for the body to rest at a national monument in the capital.

They finally agreed Mugabe would be buried at the National Heroes Acre monument, in about 30 days, once a mausoleum was built for him.

But Mugabe was a non-practising chief in his homestead, and the burial feud has highlighted the spiritual beliefs, superstitions and rituals surrounding deaths of traditional leaders in parts of Zimbabwe.

Once Mugabe's remains were returned to Zvimba on Monday, traditional leaders demanded the burial remain in line with local rites.

One of the Zvimba chiefs, Raphael Zvikaramba, said they had "so far" accepted the government's proposal, but refused to comment on the details.

"When a chief such as Mugabe dies, he is not a person that can be buried at Heroes Acre, that is forbidden. He should be buried in a cave," Burombo told AFP.

"Mugabe was not just a president, but he was the embodiment of the spirit of Kaguvi," he added, referring to one of Zimbabwe's revered spirit mediums and pre-colonial nationalist leader.

When a chief died, often his body "would be dried", his teeth "extracted" and his finger and toenails "ripped off", Burombo said.

He said the body would then be wrapped in skin hides before burial, and could even be swapped with a token such as a goat's head to be buried instead.

"You can build that monument, but it doesn't mean that is where the remains of Mugabe will be buried... it's just for people to continue remembering him."

Mugabe grew up Catholic and was educated by Jesuits. But according to Burombo, he still followed "traditional norms and practices" despite "going to church".

Mugabe's remains currently lie in his childhood village of Kutama, in Zvimba district, about 90 kilometres (56 miles) west of Harare.

During a mass held in his honour, priest Emmanuel Ribeiro -- a former acquaintance -- said the former president "was secretive and private" about his beliefs.

He said that in the past, a death would only be revealed days or even weeks after burial.

"Very few people knew where the chief was buried," Mararike said. "There were caves where a particular clan normally buried their own chiefs."

But Mararike said that long-standing political tensions between the family and government "might have precipitated" the discord and mystery surrounding the funeral.

Mugabe's family are still bitter over the role current President Emmerson Mnangagwa played in his ouster.

A former guerrilla who fought alongside Mugabe against colonial forces, Mnangagwa was fired as first vice president in 2017. Mugabe had branded him a "traitor".

Soon after, protesters took to the streets and military officers pressured Mugabe to step down in what was widely seen as a struggle between Mnangagwa's faction and loyalists to Mugabe's wife Grace inside the ruling ZANU-PF party.

"There obviously was quite a lot of anger among the Zvimba people on how their son was removed from office," said Mararike.

"The late president Mugabe might have said something before he died," he added referring to how he wanted to be buried, "but what he really said we don't know".