Trump insists pandemic almost over, Biden says he did 'nothing' 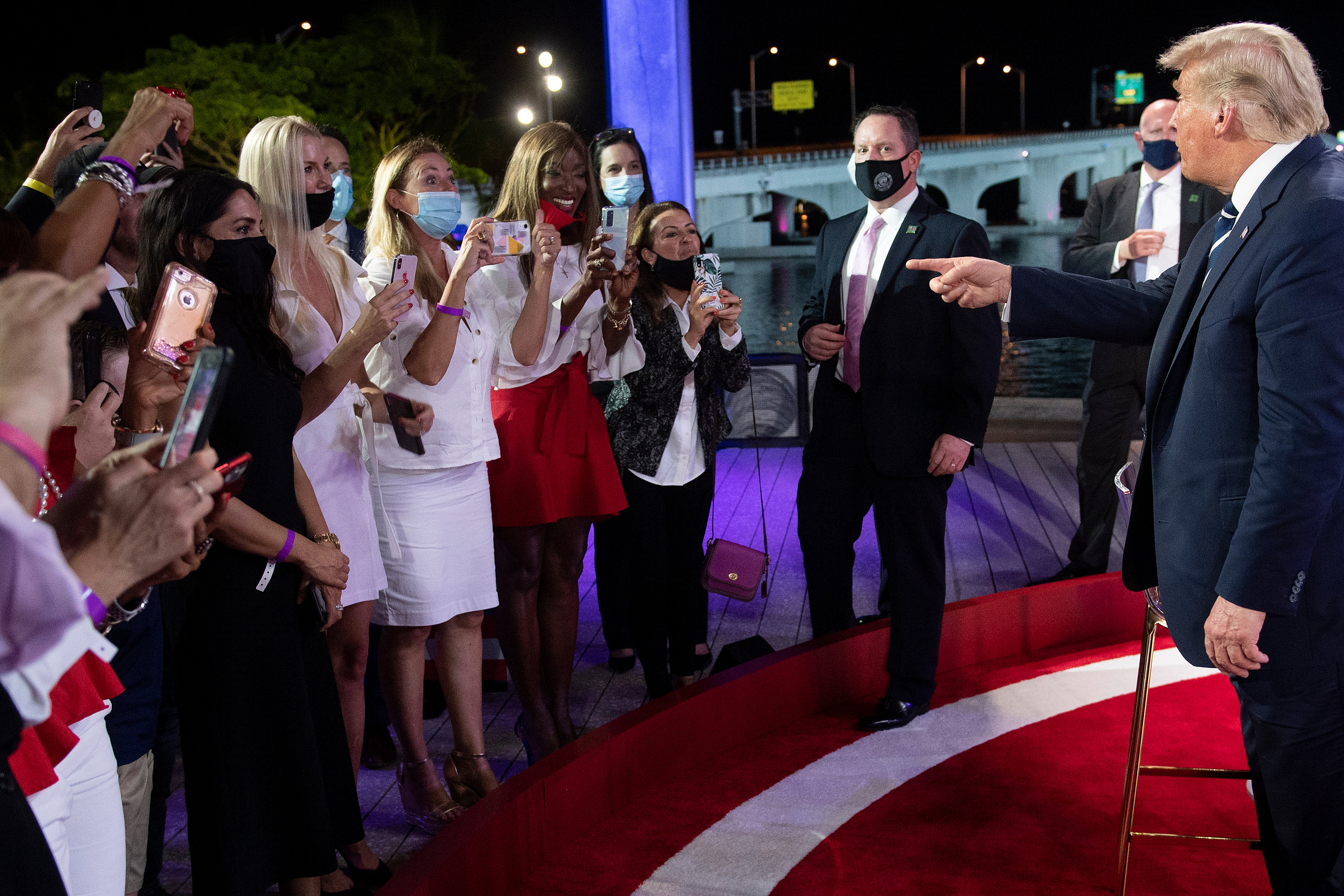 US President Donald Trump speaks with audience members after participating in an NBC News town hall event at the Perez Art Museum in Miami on October 15, 2020. (AFP)

WASHINGTON - President Donald Trump delivered a combative defense on Thursday of his Covid-19 response while election challenger Joe Biden -- offering a glaring contrast in style in a rival town hall -- accused him of doing "nothing" to end the pandemic.

The dueling appearances, scheduled at the same time on rival television networks, showed Biden giving unflashy, empathetic, often in-depth answers to voters in the audience, while Trump delivered a fiery, sometimes agitated defense of his presidency.

Trump, who trails in the polls ahead of the November 3 election, was especially under pressure about the coronavirus that has killed over 217,000 Americans and inflicted deep economic damage.

"We're rounding the corner," Trump insisted with his usual optimism, even as swaths of the United States see sharply rising caseloads.

But pressed by the host of the NBC town hall in Miami, he became quickly frustrated, especially when asked about his previous lukewarm denunciations of extremist rightwing groups in the country.

He notably refused to denounce QAnon, a conspiracy theory movement that claims Trump is waging a secret war against a global liberal cult of Satan-worshipping pedophiles.

"I know nothing about QAnon," Trump said, and then continued to praise the shadowy group's position being "very much against pedophilia."

The president entered calmer waters when fielding a series of more comfortable questions from members of the audience, one of whom sparked applause by telling Trump: "You have a great smile."

"We're in a situation where we have 210,000 plus people dead and what's he doing? Nothing. He's still not wearing masks," Biden said of Trump at the event in Philadelphia.

His standout comments at a time of profound political conflict in the country were when he vowed to improve the atmosphere, saying "grudges don't work."

"We've got to change the nature of the way we deal with one another," Biden said.

"If I'm elected president, the first thing -- and not a joke... I'm going to pick up the phone and call them and say, 'Let's get together.'"

Biden repeatedly came back to the theme of unity, saying he would be president to all Americans including those who voted against him.

In a gesture to those in the audience, Biden stayed on stage for some 30 minutes after the town hall ended so he could answer more questions.

Originally, both candidates were meant to meet Thursday for what would have been their second of three presidential debates.

The first was a brutal affair in which Trump repeatedly talked over Biden and the Democrat told him to "shut up."

The follow-up was scrapped after organizers switched to a virtual format, citing Trump's coronavirus infection, and the president refused to accept the arrangement.

Trump, who says he is clear of Covid-19 and returned to the campaign trail Monday, has rallies booked in battleground states every night this week.

He predicted to supporters in North Carolina earlier Thursday that Biden would be given an easier time on ABC.

The decision by NBC to accept a Trump appearance at the same time as Biden's town hall likely meant that few Americans would get to see and contrast both men.

With only 19 days until the election, Trump is now running out of time to overtake Biden.

Even a close ally to Trump, Senator Lindsey Graham, said Thursday Biden may be on his way to victory.

READ: Trump could campaign, Pelosi questions his fitness for office

"You all have a good chance of winning the White House," he told Democratic colleagues at a hearing on Trump's conservative Supreme Court nominee Amy Coney Barrett.

Trump and Biden hold their final debate October 22, and Biden said that out of "decency" he expects both men will get coronavirus tests beforehand.

Despite Trump's insistence that the pandemic is in the rear view mirror, it continues to disrupt the election.

Following Trump's temporary time out recovering, Biden's running mate Kamala Harris has put her own travel on hold after her communications director and a flight crew member tested positive.

Harris did not need to quarantine, the campaign said, but "out of an abundance of caution" would suspend in-person campaigning until October 19.

The campaign said that yet another person who tested positive had traveled on Biden's plane this week but had been so far away that the candidate was in no danger and doctors said "there is no need" for him to quarantine.