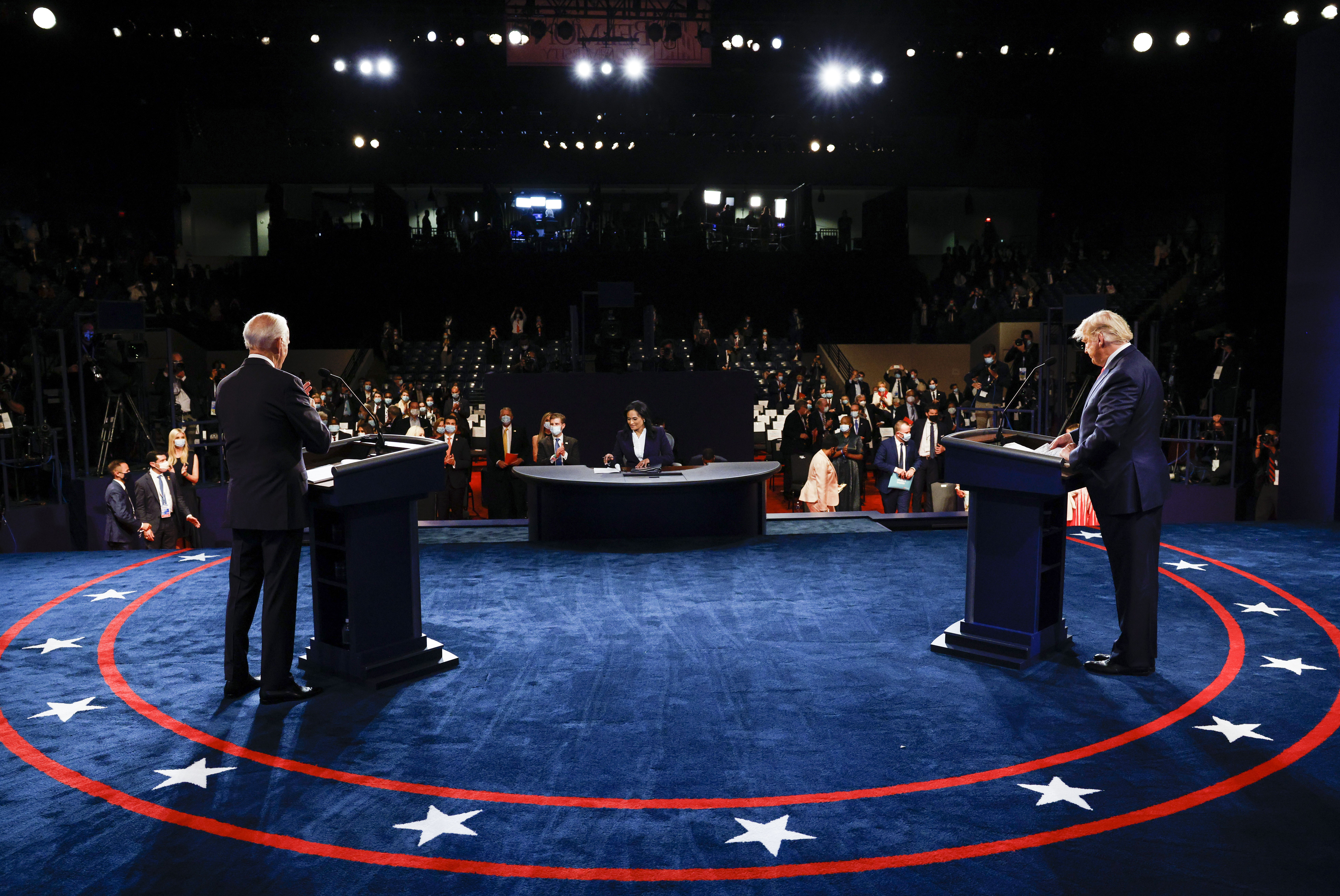 File: US President Donald Trump and Democratic presidential nominee Joe Biden participate in the final presidential debate at Belmont University on October 22, 2020 in Nashville, Tennessee. This is the last debate between the two candidates before the November 3 election. (AFP)

PENSACOLA - Donald Trump launched an intense last-ditch reelection push Friday in Florida, insisting that Covid-19 is disappearing, while frontrunner Joe Biden hammered his message that the president had abdicated responsibility for a pandemic that is actually surging.

With 50 million people having already cast early ballots, Biden has a firm lead in national polls, as well as in most of the battleground states like Florida that typically decide the winner of US presidential elections.

The drama of the final Trump-Biden televised debate on Thursday was thought unlikely to move the needle significantly.

But Trump pulled off a stunning upset when he defeated the favorite Hillary Clinton in 2016 and he will now make a grueling series of campaign stops through the battlegrounds to try and repeat that feat.

Targeting the politically powerful seniors' vote in Florida, Trump began with a rally in the famous retirement community The Villages, where he told a large crowd that all Biden talks about is "Covid, Covid, Covid" to try and "scare people."

"We're going to quickly end this pandemic, this horrible plague," he said, underlining his consistent message that the virus is on a rapid decline, when in fact case numbers are spiralling upward again, with more than 220,000 Americans already dead.

Referring to Biden's warning of a "dark winter" ahead, Trump countered: "We're not entering a dark winter. We're entering the final turn and approaching the light at the end of the tunnel."

He then pivoted to his own scare tactics, claiming that Biden would let in hordes of illegal immigrants that he said were comprised of "criminals and rapists and even murderers."

READ: Trump insists pandemic almost over, Biden says he did 'nothing'

"Joe Biden cares more about illegal aliens than he does about senior citizens," he said.

Trump finished his day with a rally in Pensacola, Florida, where he told the cheering crowd that "11 days from now, we're going to win my home state of Florida."

While he is a lifelong New Yorker, Trump changed his residency to Florida during his White House tenure and on Saturday he was to cast his own ballot in West Palm Beach.

The rest of the weekend will see Trump, 74, maintaining the frenetic pace with rallies in North Carolina and Ohio on Saturday, then New Hampshire on Sunday, before a spate of more rallies next week.

Trump said that by November 3 he'll be doing "five or six a day."

Biden, as throughout the coronavirus-disrupted 2020 campaign, remained lower key. But even the 77-year-old Democrat is ramping up activity in the final stretch.

In his home state of Delaware, he gave a speech about economic recovery from the pandemic, slamming Trump's record and vowing -- as Trump has -- that he would provide a safe coronavirus vaccine to all who want it.

"We saw him refuse to take responsibility for a crisis that should have been met with real, presidential leadership," Biden said. "We saw him diminish the pain felt by so many Americans."

READ: Trump: I learned a lot about COVID-19

"We are more than eight months into the crisis and the president still doesn't have a plan," Biden claimed. "He's given up. He quit on you, on your family, on America. He just wants us to grow numb and resigned to the horrors."

On Saturday, Biden will travel to Pennsylvania, which like Florida is in the top tier of battleground states deciding national elections.

Barack Obama, whom Biden served as vice president, will lend his Democratic star power to the campaign on Saturday with a rally in Miami.

Trump's campaign has been turned upside down by the coronavirus crisis, which a majority of voters say he has failed to handle well.

In addition to the national disaster, Trump's reelection bid has been hampered throughout by his own erratic and often bad tempered behavior.

At Thursday's final televised debate in Nashville, the president pivoted to the more cheerful, even-keeled leader that aides have long been hoping Americans will see.

Perhaps most startling was the relative civility of the debate compared to the disastrous first showdown last month when Trump continuously shouted Biden down.

This time, Trump called his Democratic opponent "Joe" and even lauded  moderator Kristen Welker of NBC News, who had a mute button to keep order.

But whether this shift from the usually bruising diet of insults, grievances and conspiracy theories will be enough at this stage -- or whether it will even last the weekend -- is an open question.

Despite the sunnier image, Trump's team had gone into Thursday's debate hoping to damage Biden with a murky and dubiously sourced allegation that he profited from foreign business deals conducted by his son while he was serving in the White House.

The attack largely fizzled, however, when Biden not only parried the accusations but noted that serious questions were mounting around Trump himself, including his holding of a bank account in China and failing to publish his US tax returns.