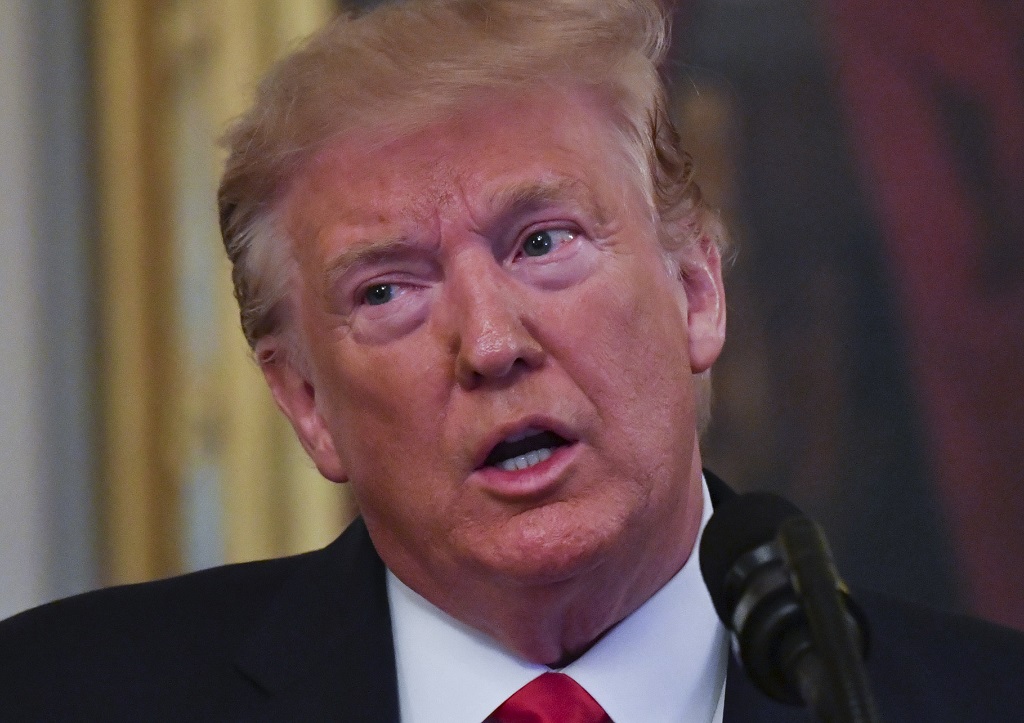 WASHINGTON, United States - US President Donald Trump on Friday vigorously rejected a whistleblower's claim of wrongdoing, amid reports he used a call with Ukraine's president to pressure him to investigate the son of Trump's Democratic rival Joe Biden.

The whistleblower's secret complaint has triggered a tense showdown between Congress, whose Democratic leaders are demanding to review the complaint, and the executive branch which has barred them from doing so.

It has also raised concerns Trump sought to strong-arm Ukraine into providing damaging information on the president's possible 2020 challenger, which would represent dangerous foreign meddling in the US election - similar to the interference blamed on Russia in 2016, when Trump defeated Hillary Clinton.

READ: 'I don't have a racist bone in my body': Trump

The Washington Post, citing two unnamed former US officials, said the complaint stemmed from Trump's communications with Ukraine, and a "promise" allegedly made by the president.

Trump slammed the "ridiculous" story, attacking the "partisan whistleblower," despite admitting to not knowing the person's identity.

He insisted he had a "totally appropriate" conversation, without detailing with whom, or what was said, and instead suggested Biden and his son should be investigated for their actions in Ukraine.

Biden responded forcefully, demanding Trump immediately release the transcript of the call and saying the reports Trump sought to coerce his Ukrainian counterpart, if true, amounted to "clear-cut corruption."

READ: Trump says Biden would 'go down hard' if they fought

Suspicions have focused on a July 25 call between Trump and Ukraine's President Volodymyr Zelensky, a former comedian elected in May.

Trump's Democratic opponents have been probing that call in connection with allegations Trump and his personal lawyer Rudy Giuliani tried to pressure the Ukrainian administration.

When asked by reporters whether he discussed the Bidens with Zelensky, Trump said curtly: "It doesn't matter what I discuss."

But he did not deny having done so.

Instead he urged media to "look into" Biden's involvement in Ukraine, and his comments in early 2016 in which the former US vice president said the Obama administration would freeze $1-billion in US loan guarantees unless Kiev fire its top prosecutor.

"Somebody ought to look into that," Trump said.

Biden - who leads Trump according to most polls - said the reports show the president's "willingness to abuse his power and abase our country."

"It means that he used the power and resources of the United States to pressure a sovereign nation - a partner that is still under direct assault from Russia - pushing Ukraine to subvert the rule of law in the express hope of extracting a political favor," Biden said in a statement.

Amid the swirling allegations, Giuliani told CNN Thursday that "of course I did" ask Ukraine to investigate Biden.

Giuliani said he did not know whether Trump brought up Biden, but said he would have "every right" to do so.

Adding yet another layer to the controversy, congressional policymakers were concerned the Trump administration had been holding back military aid to Ukraine at the time. The aid was finally released last week.

Zelensky inherited an armed conflict against pro-Russian rebels that has killed nearly 13,000 in five years and caused serious economic difficulties.

Democratic lawmakers say a president conditioning foreign aid on providing dirt on a US election rival would amount to grounds for impeachment.

"The president can't use US aid as a weapon to serve his own political purposes," House Democrat Seth Moulton tweeted. "This is an impeachable offense if true."

Clinton herself weighed in Friday with a sharp critique.

"The president asked a foreign power to help him win an election. Again," she tweeted.

Presidential candidate Elizabeth Warren called for Trump's impeachment, and in a series of tweets criticized Congress for its repeated failure to start the process.

As the crisis swells, Trump and Zelensky will meet for the first time Wednesday, during the UN General Assembly.

Their talk will focus in part on the "incredible energy and success President Zelensky has put forward in implementing anticorruption efforts," said a senior US administration official.

The whistleblower scandal mushroomed this week when House intelligence chairman Adam Schiff revealed the acting Director of National Intelligence, Joseph Maguire, had refused to hand over the complaint to Congress.

Maguire is scheduled to publicly testify before Schiff's committee Thursday about why the executive branch wants the complaint hidden from lawmakers.