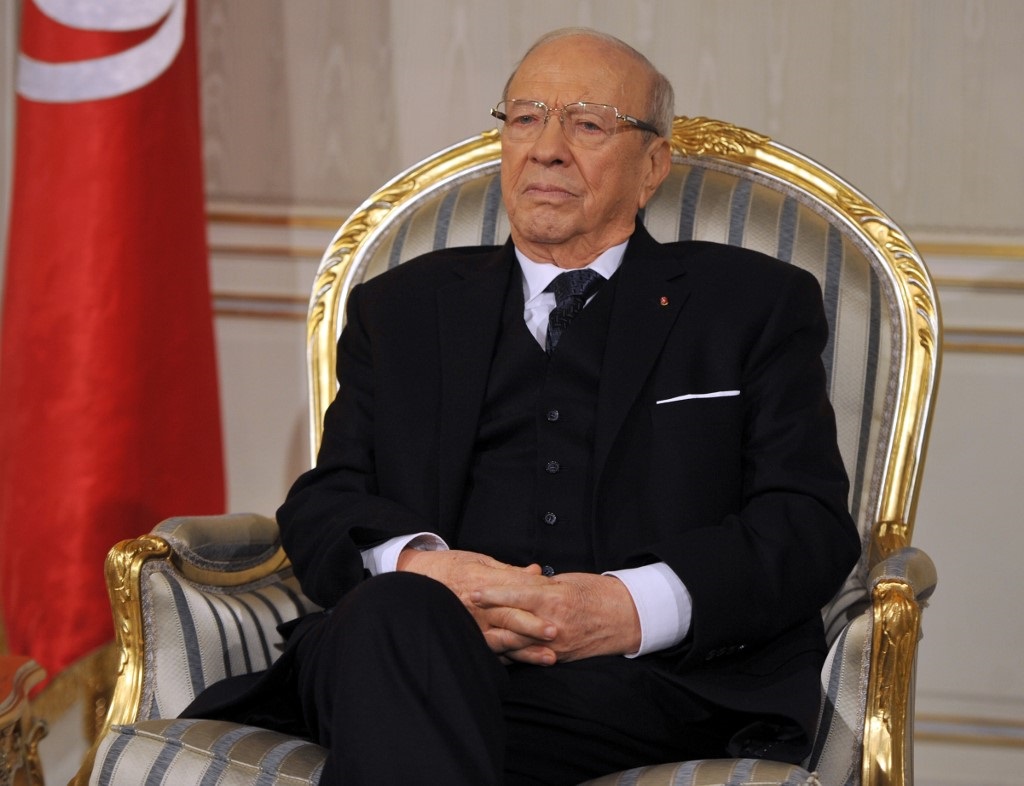 Tunisian President Beji Caid Essebsi posing in his office after a handover ceremony.

TUNIS - Tunisia is gearing up for snap elections as early as September following the death of President Beji Caid Essebsi, amid uncertainty over who could step forward to run the North African country.

Essebsi, the country's first head of state elected in nationwide polls, died on Thursday at the age of 92, triggering fears of political unrest in a country seen as a rare success story following the Arab Spring uprisings.

Newspapers on Friday paid tribute to "the father of consensus", while festivals were cancelled and the government declared seven days of mourning.

"Our pain is great, our sorrow is immense," read an editorial in French-language daily Le Temps.

Hundreds of people - some in tears - gathered outside a military hospital in Tunis on Friday as Essebsi's body was taken to the presidential palace in nearby Carthage for a private burial.

Within hours of Essebsi's death, parliament speaker Mohamed Ennaceur was sworn in as interim president, who under the constitution has 90 days to organise a presidential election.

The electoral commission said the poll would "probably" be held on September 15, two months earlier than planned.

Foreign governments including that of former colonial power France have hailed Essebsi's role in Tunisia's democratic transition, with nearby Algeria and Mauritania declaring three days of mourning.

The main funeral ceremony is to take place on Saturday and French President Emmanuel Macron's office announced he would attend.

The birthplace of the Arab Spring revolts, Tunisia is the only country affected by the uprisings to have pushed through democratic reforms - despite political unrest, a sluggish economy and jihadist attacks.

Islamist extremists have staged repeated deadly attacks since the overthrow of Ben Ali, raising fears for the country's fragile democracy and throttling its tourism industry.

Following Ben Ali's departure, Essebsi founded the secularist Nidaa Tounes (Call of Tunis) party, which he led to victory at the polls in 2014.

The party formed a coalition with the Islamist-inspired Ennahdha, which lasted four years before the two parties split.

But Nidaa Tounes has struggled to overcome bitter internal divisions between Prime Minister Youssef Chahed and the president's son, Hafedh Caid Essebsi, leading to the premier being sidelined from Nidaa Tounes and forming his own rival party, Tahia Tounes.

The president's death also comes amid a debate over who will be able to run in the next presidential elections.

Essebsi neither rejected nor enacted an amended electoral code passed by parliament in June that would bar the way for several strong candidates including media magnate Nabil Karoui.

Karoui, who has formed a political party, was charged with money laundering this month after he stated his intention to stand.

The presidential election, along with a parliamentary vote that had been set for October, also comes with Tunisia yet to set up a constitutional court eight years after the Arab Spring.

Despite the uncertainty, Chahed hailed a "peaceful transfer of power", while interim leader Ennaceur vowed that "the state will continue to function".

"What's good is that everyone is continuing with life as normal," said Tunis resident Jalel Slimani. Essebsi's death "hit us hard because he was our president. But the country must continue to move forward."

Former parliament speaker Adel Bsili wrote on Twitter that "the people are pleased to know that their country is a democratic state, not an emirate."

"Tunisians... have passed the test to prove to the entire world that Tunisia is a democratic country."