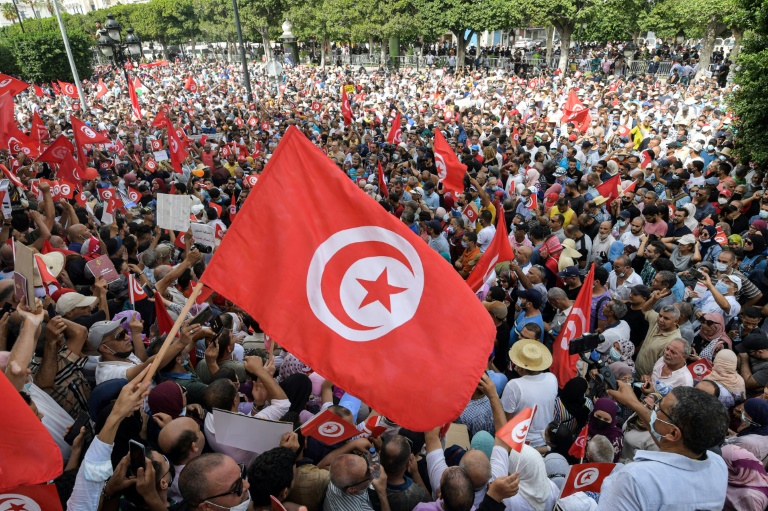 Demonstrators chant slogans during a protest in Tunisia's capital Tunis on September 26, 2021, against President Kais Saied's steps to tighten his grip on power

TUNIS - About 2,000 Tunisians rallied in their capital on Sunday to protest President Kais Saied's steps to tighten his grip on power which they labelled "a coup d'etat".

It was the largest demonstration since Saied on July 25 sacked prime minister Hichem Mechichi, suspended parliament and granted himself judicial powers, a move he followed up on Wednesday by announcing "exceptional measures" that allow him to rule by decree.

Protesters waving the red and white Tunisian flag gathered outside the municipal theatre in Tunis, well before the demonstration's start, and shouted slogans in defence of the 2014 national charter.

"Constitution, freedom and national dignity," chanted the demonstrators. They also demanded "national unity against populism" and called for the "end of the Kais Saied regime".

Security forces were deployed in large numbers along Bourguiba Avenue, which runs through the heart of the capital, with armoured cars, police vans and metal barriers set up to control access to different areas.

The president made his power grab after months of political stalemate and during the COVID-19 pandemic which further aggravated the country's economic and social difficulties.

Large crowds cheered his move all over the country at the time, but the mood was hostile at the smaller demonstration in Tunis on Sunday.

Some shouted "Get out, get out", repeating the slogan of protests that started in December 2010 and culminated in the resignation of Tunisia's dictator Zine El Abidine Ben Ali on January 14, 2011 after 23 years in power. 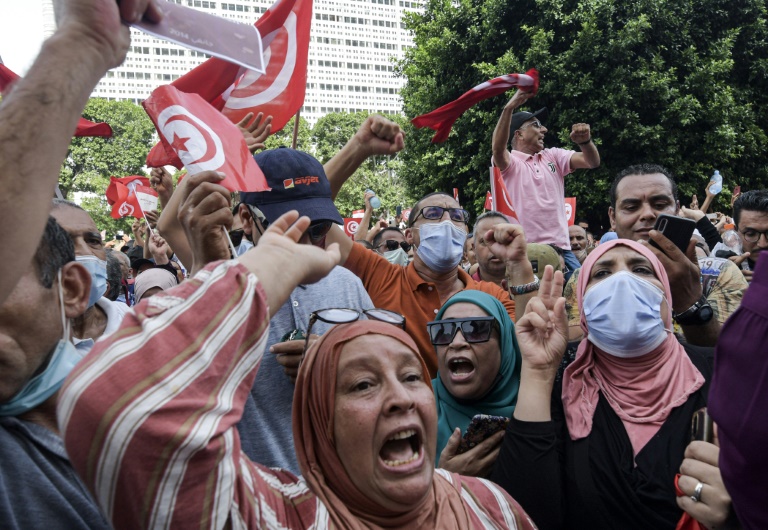 Ben Ali's fall marked the start of the Arab Spring revolts around the region, in which Tunisia emerged as the only democracy.

"Things are going back to the Ben Ali period, to a dictatorship," said Nade, 27, a woman attending the protest with her mother.

Nade, who works as an administrator, said she is worried because it was thanks to the 2011 revolution that Tunisians "finally had rights", which they don't want to lose.

Yet Saied has placed "all the power in the hands of only one man," himself, she said.

Nearby, a protester in his 60s said he had come "to defend the constitution," fearful that the country could fall back into "dictatorship".

According to him, the demonstration brought together more than just followers of Moncef Marzouki, one of its organisers, who was Tunisia's first president after elections following Ben Ali's fall.

There were also supporters of the ultraconservative Islamist-nationalist party Al-Karama, many leftists, and "ordinary citizens", the man said.

Another protester, Ibrahim, 59, said he had voted for Saied in the 2019 presidential election. "And he betrayed us."

The protest came after around 20 global and Tunisian human rights groups on Saturday condemned Saied's "power grab" and labelled it "a first step towards authoritarianism".

It was the latest warning from civil society groups of a drift away from democracy.

The speaker of Tunisia's parliament Rached Ghannouchi on Thursday called for "peaceful struggle" against a return to "absolute one-man rule".