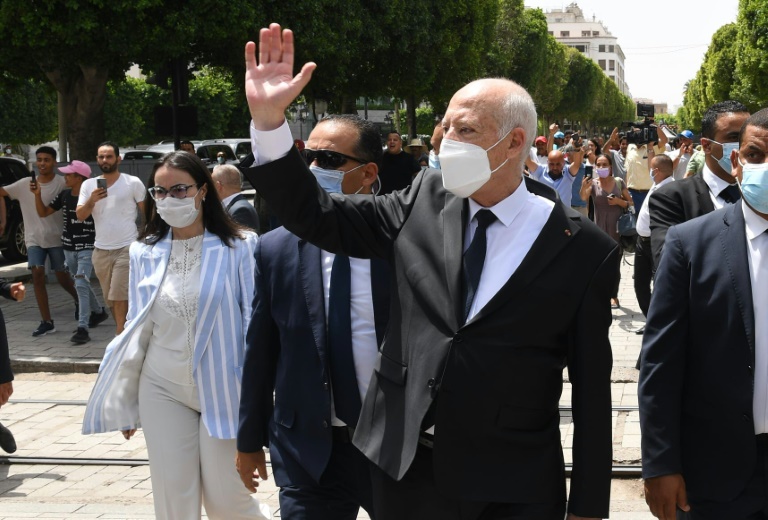 TUNIS - Tunisian President Kais Saied has announced plans to form a new government and said the constitution should be amended, weeks after he sacked his premier and suspended parliament in moves his critics called a coup.

Speaking to two television channels after a late Saturday evening stroll in central Tunis, Saied said he would form a new government "as soon as possible" after selecting "the people with the most integrity". But he declined to give a specific timeline.

Saied also told the television stations that "the Tunisian people rejected the constitution". He added that such charters are "not eternal" and stated that "we can introduce amendments to the text".

His comments, which confirmed earlier media speculations on his plans, were dismissed by the Islamist-inspired Ennahdha party, the largest bloc in parliament.

The party in a statement expressed "its categorical rejection of the attempts of some parties that are hostile to the democratic process... to push for choices that violate the rules of the constitution".

Ennahda added that it would oppose "an intended suspension of the application of the constitution and a change to the political system, possibly through a referendum".

The influential UGTT trade union confederation, which has so far backed Saied, also rejected any "suspension of the constitution" and called for early legislative elections so that a new parliament could look into potential constitutional changes.

Saied, a legal theorist and former law professor, was elected in 2019 and has billed himself as the ultimate interpreter of the constitution.

He invoked that power on July 25 to fire the prime minister, freeze parliament and strip MPs of their immunity, and assume all executive powers.

His power grab came amid chronic legislative infighting that had crippled governance. It was followed by a sweeping anti-corruption drive that has included detentions, travel bans and house arrests of politicians, businessmen and judicial officials.

Saied has yet to appoint a new government or reveal a roadmap towards normalisation, despite repeated demands by political parties.

His moves have been criticised by judges and opponents, in particular Ennahdha.

But some Tunisians, exasperated by their political class and its perceived corruption, impunity and failure to improve living standards more than a decade since the country's protests launched the Arab Spring, see them as a necessary evil.

The chants of "Dignity!" and "Work!" that filled the air during the revolution have again started to sound at demonstrations.

In images posted around midnight on the Tunisian presidency's Facebook page, Saied was seen walking down the capital's Bourguiba Avenue as a crowd sang the national anthem, before he stopped to speak with the TV channels.

Earlier that day on the same central thoroughfare, a man had set himself on fire and later died of his burns -- a desperate act that followed another self-immolation a week before protesting living conditions

According to Tunisian media reports, the man who died Saturday was struggling with economic issues and had come to Tunis from Djerba to seek solutions to his plight.

The deaths recall that of the street vendor who burned himself alive on December 17, 2010 and launched both Tunisia's popular revolution and the wider Arab Spring that toppled several autocratic leaders in the region.

Tunisia, hailed as a rare democratic success story in the Middle East and North Africa, was struggling with dire economic woes and the Covid-19 pandemic before being plunged into the latest political crisis.

Saied's comments came a day after he received in Tunis the EU foreign policy chief Josep Borrell who expressed the bloc's concerns over the power grab.

"I communicated to the president Europe's apprehensions about the preservation of democratic gains in Tunisia," Borrell said after talks with Saied.

"The free exercise of legislative power and the resumption of parliamentary activity are part of these gains and must be respected," he added.

Earlier this month, diplomats from the G7 nations -- Britain, Canada, France, Germany, Italy, Japan and the US -- called on Saied to return Tunisia to "a constitutional order".