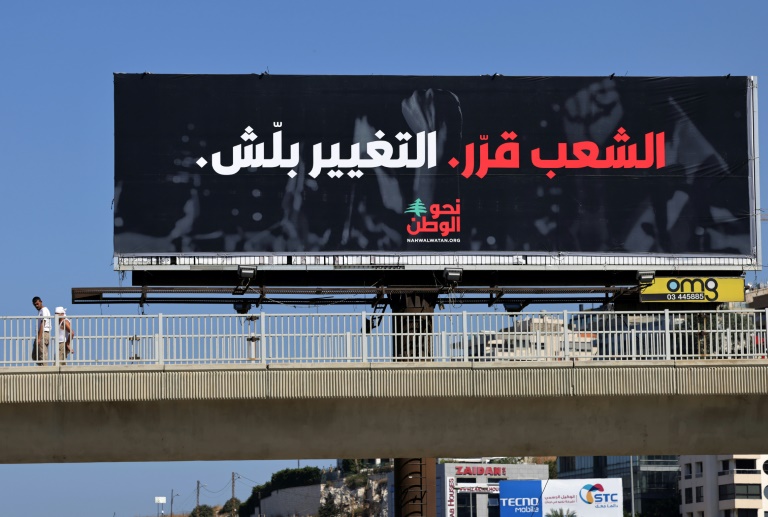 An electoral billboard reading "The people have decided, the change has started" in Dbayeh, east of Lebanon's capital Beirut, ahead of elections next year

Hundreds of thousands of Lebanese took to the streets from October 17, 2019 in an unprecedented countrywide and cross-sectarian uprising.

Their demands were for basic services and the wholesale removal of a political class they accused of mismanagement and corruption since the end of the 1975-1990 civil war.

But as the country sank further into economic turmoil, made worse by the coronavirus pandemic, what demonstrators called their "revolution" petered out.

Many then saw a probe into the cataclysmic 2020 Beirut port blast as the best chance to bring down Lebanon's hereditary political barons, but even intense international pressure in the explosion's aftermath failed to make them change their ways.

Last week, feuding parties turned Beirut into a war zone, with heavy exchanges of fire killing seven people in a flare-up sparked by a rally against the main investigating judge.

Lawyer and activist Firas Hamdan is one of many to say that the elections, set for next year, will be a new opportunity for people to raise their voices against the authorities.

"We tried everything -- protests in a single location and across regions, demonstrations outside the central bank and near the homes of officials, following lawmakers and officials into restaurants and coffee shops, and blocking roads -- but all to no avail," he said. 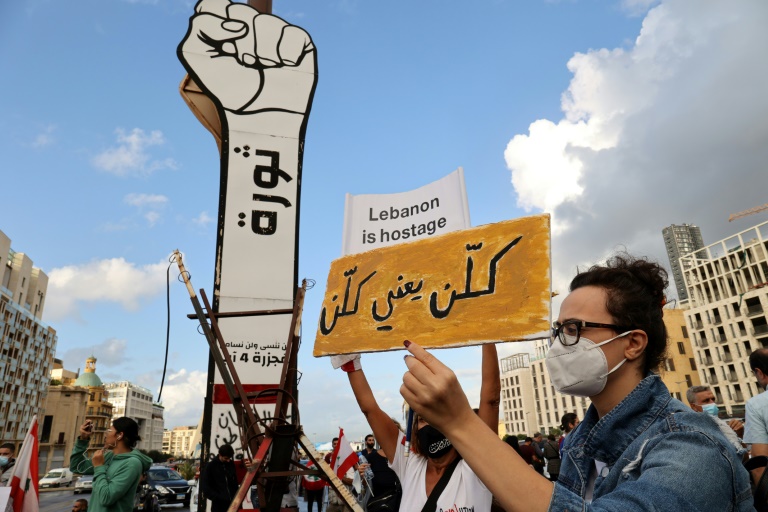 Protesters gather in central Beirut's Martyrs' Square on October 17, 2021 to mark two years since the start of the uprising. The small sign reads in Arabic: 'All of them, means all of them', a demand for the removal of Lebanon's political leaders

Instead now "the parliamentary elections will be a pivotal moment in confronting the system -- even if not the final battle," he added.

Hamdan said the polls would allow people to choose between those who want to actually "build a state", and a tired ruling class "that only knows the language of arms, destruction and blood".

It will be a "face-off between thieves and murderers, and citizens who deserve a chance at state building", said the lawyer, who was hit in the heart by a lead pellet at a demonstration last year demanding justice over the port blast.

The protest movement has given birth to a clutch of new political parties, as well as attracting support from more traditional ones such as the Christian Kataeb party.

Each has its own vision of how to achieve change, but all largely agree on the importance of the upcoming elections.

Zeina El-Helou, a member of new political party "Lana" (For Us), said it was time to "move on from the nostalgia of throngs of people in the streets chanting" for change.

Activists needed instead to work on "managing frustrations and expectations" for the future, she said.

The political battle would be tough, as it opposed two sides of "unequal means", she said, referring to her side's limited financing or access to the traditional media for campaigning, and to gerrymandering giving establishment parties the advantage.

The various opposition groups have yet to decide how they will take part in the upcoming polls, and some observers have criticised them for failing to coordinate their efforts effectively. 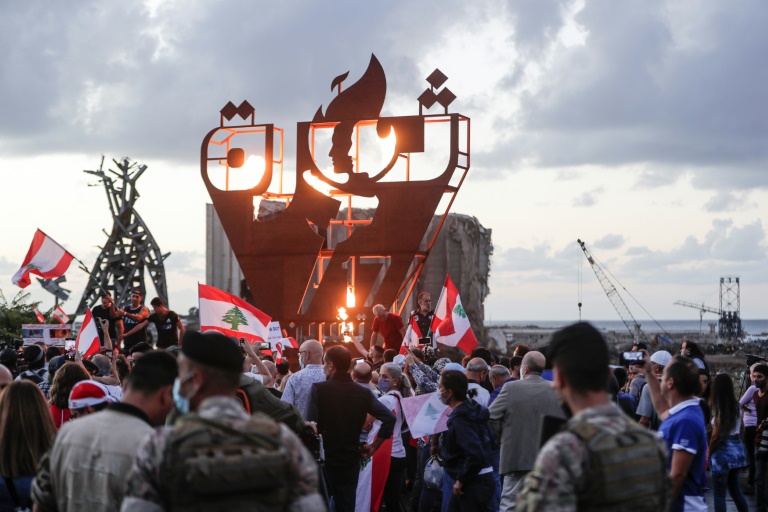 Protesters gathered this week near the port of Beirut, devastated in a huge explosion last year, during a rally to mark the second anniversary of the start of a nationwide anti-government protest movement

Voters, meanwhile, are busy battling to get by on deeply diminished incomes, amid endless power cuts, price hikes and shortages of everything from medicine to petrol.

Maher Abu Chakra, from the new grouping "Li Haqqi" (For My Right), said the polls would likely not change a thing but it was "important to take part".

"It's a first step on the path to lasting change."

But he too acknowledged the challenges.

"When people's priority becomes making sure they can provide basic needs, they're less ready for confrontation" in politics, he said.

Tens of thousands have been laid off or have taken pay cuts since the start of the crisis, and many people have been deprived of their own life savings, which have become trapped in the banks.

In some cases, traditional parties have managed to wheedle their way back into voters' homes by giving them food, fuel or medication, or even paying their electricity or water bills.

Hilal Khashan, professor of political science at the American University of Beirut (AUB), said the old political system was "still alive and well".

The people, however, were suffering from "social fatigue" and had "understood change wouldn't be so easy," he said.

Rima Majed, assistant professor of sociology at AUB, said people were leaving the country because they had lost hope in any political change. 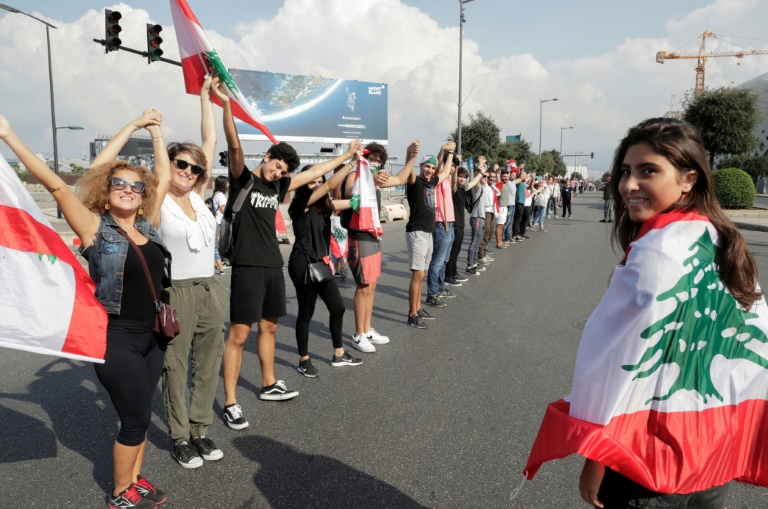 Fed up with constant blackouts and shortages, thousands of fresh graduates and better-off families have packed their bags and quit Lebanon in recent months in search of a better life abroad.

"It's deluded to believe that elections can change the system," she said.