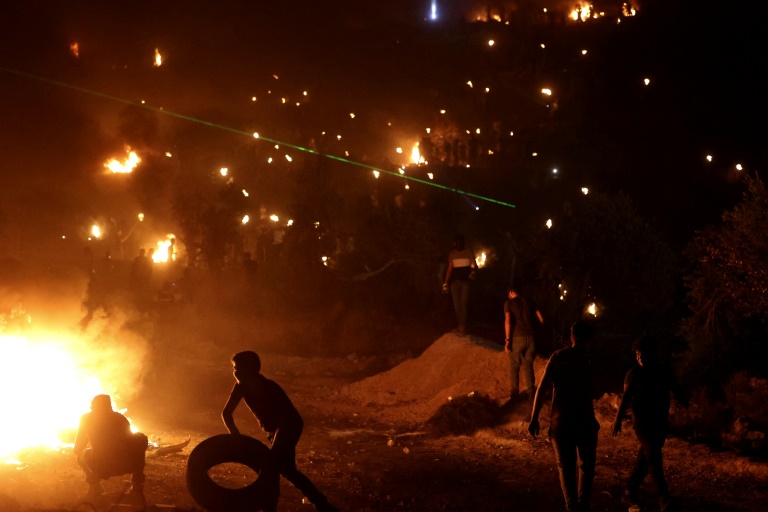 "They will not stay on our land," said one protester, a scarf wrapped around his face to conceal his identity from Israeli troops, near the small Palestinian town of Beita in the occupied West Bank.

Across the valley is the newly built Israeli settlers' outpost of Eviatar.

Some 50 families arrived last month, erecting huts and tents and bringing in trailer caravans in defiance of international law and even Israeli restrictions.

"When they set up their base... we thought they would stay a day or two," said Raad, a young man from Beita with a thick black beard, who declined to give his second name for fear of arrest.

But in less than 48 hours, "they put in place more than 20 caravans -- which means that they intend to stay," he added. 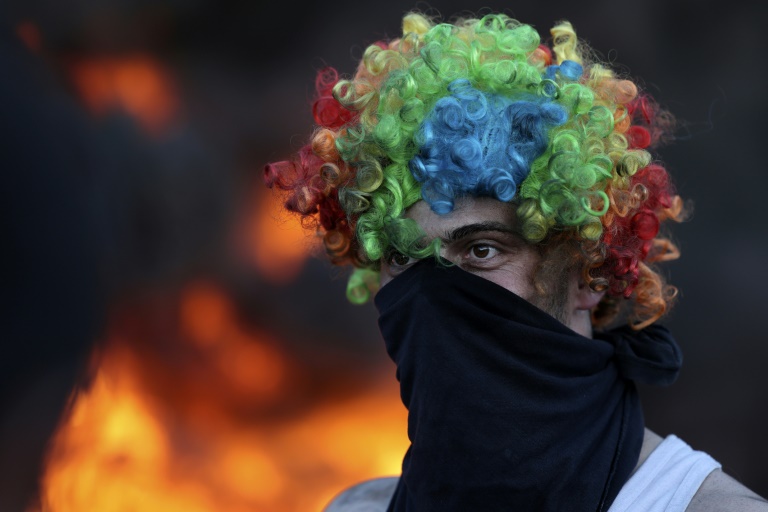 Palestinians hold regular protests on Fridays, the weekly day of rest, against Israel's occupation of the West Bank, which stretches back to the Six-Day War of 1967.

But in recent days, the residents of Beita -- a town of some 17,00 people south of Nablus -- have switched tactics.

Instead of mobilising during the day, they hold nighttime protests to keep the settlers awake.

Jewish settlers arrived on the hill outside Beita in early May.

Soon after, daily protests began, which repeatedly ended in clashes with Israeli troops.

Four Palestinians including a teenager have been killed, and more than 300 injured, the Palestinian Red Crescent said. 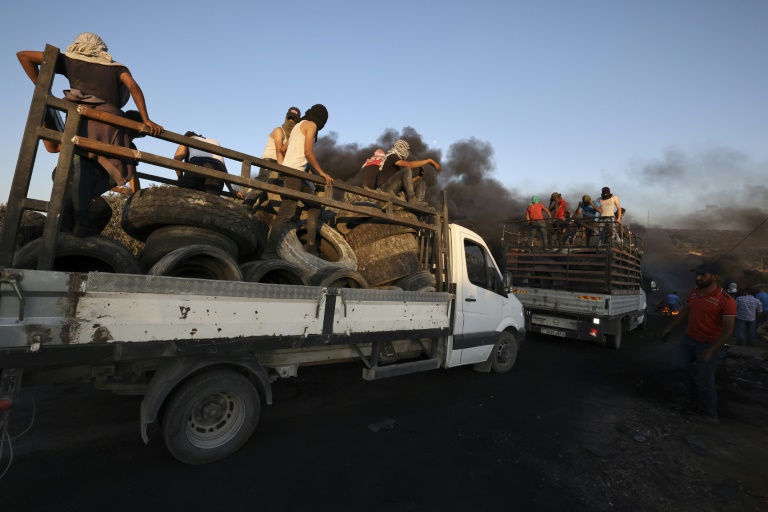 The tyres arrive on trucks and are in plentiful supply

According to villagers, five people have been arrested since the night rallies began.

When the evening light slants through the olive trees, trucks arrive piled with tyres, and young men drag them onto roaring pyres.

The sky turns dark, and the air unbreathable, the wind blowing it towards the outpost.

Later, protesters start small fires and wave burning torches, lighting the hillside opposite the settlement with a terrifying wall of flames.

Some direct intense green laser beams towards the settlement, dancing the light at the windows.

Others set off fireworks, the explosions echoing above.

Tsvi Succot, one of the outpost's founders, called the protests "simply crazy", in a post on Twitter.

"We're living in a cloud of carcinogenic smoke... Kids are coughing and getting sick," Succot said.

"They're talking about evicting us, destroying our community. This can't go on. It's their village that should be destroyed."

Under international law, all Israeli settlements in the occupied West Bank -- where some 650,000 Israelis now live -- are illegal. 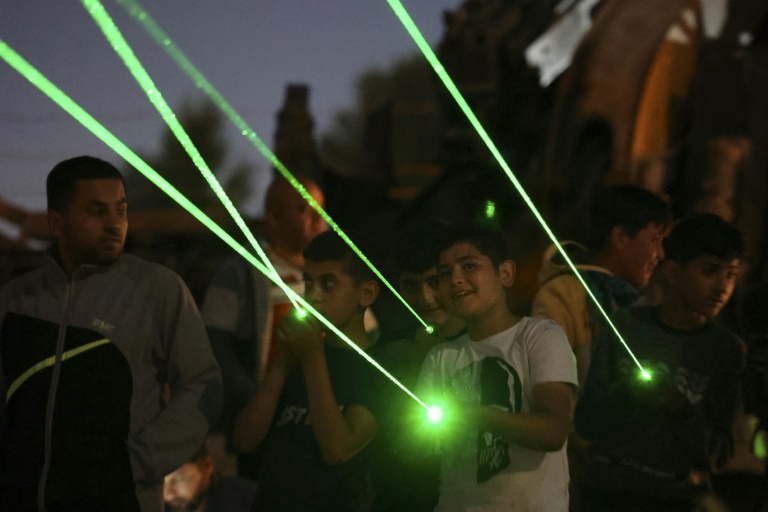 Lasers are directed towards the windows of homes in the settlement

But Eviatar, named after a settler stabbed to death near Beita by a Palestinian in 2013, also breaches all Israeli restrictions too.

The first settlers arrived after a young settler was shot dead by a Palestinian nearby.

Defence Minister Benny Gantz ordered the settlement be removed, but the decision was frozen by Benjamin Netanyahu, then prime minister.

But while Bennett himself once led a settler organisation, he is now the prime minister of an ideologically disparate coalition government with sharply divided opinions. 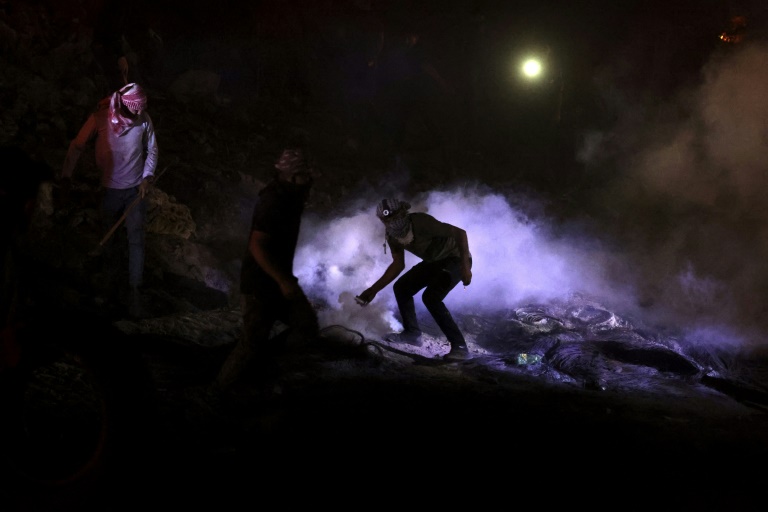 The settlement could pose a major political test. It is "bad for the possibility of future peace", Israeli anti-occupation group Peace Now said in a statement.

"A small group of people is creating facts on the ground that affect dramatically Israel's security and its foreign policy without any authority," Peace Now added. "The new government must not accept that."

- 'Guardians of the Mountain' -

The protesters are convinced their tactic will work.

"They will leave," said Ghaleb Abu Zaitoun, 77, contemplating the thick smoke, a white keffiyah scarf around his face.

"This peaceful action will force them to leave," he added. "It is better than a physical confrontation, because we do not lose our young people."

Many of the men -- generally considerably younger than Zaitoun -- wear scarves around their faces, and shirts emblazoned with the slogan "Guardians of the Mountain" on their backs.

One young man, his face masked and clothes smeared in soot, rolled another tyre into the flames.

"We have weapons, we could use them," he said, but he added that the strength of the protest was that it was carried out by local residents, not militia forces. 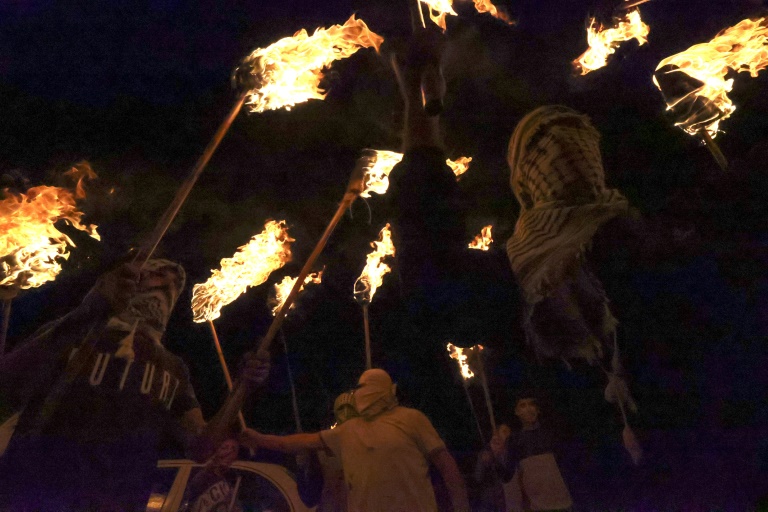 Palestinians carry torches during one of the nightly protests

"We will continue to do this until the smoke from the rubber hits their rooms," he said.

When the Palestinians come too close to the outpost, Israeli soldiers fire tear gas to drive them back.

Then as dawn breaks, everyone goes home to catch some sleep, ready to start once again at dusk.