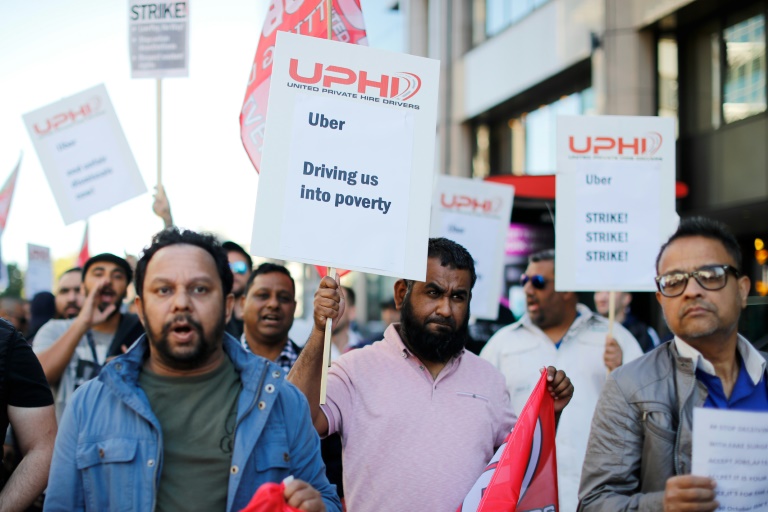 Uber drivers in Britain have staged strikes to get better wages and benefits. AFP/Tolga Akmen

LONDON - Britain's top court ruled that drivers for US ride-hailing giant Uber are entitled to workers' rights, in a judgement with huge implications for the so-called "gig economy".

The Supreme Court's unanimous ruling that the drivers are workers followed a protracted legal battle with the Silicon Valley taxi and delivery company.

"This has been a gruelling four-year legal battle for our members -- but it's ended in a historic win," said Mick Rix from the GMB trade union.

"The Supreme Court has upheld the decision of three previous courts, backing up what GMB has said all along: Uber drivers are workers and entitled to breaks, holiday pay and minimum wage."

The court ruled that the service performed by drivers was "very tightly defined and controlled by Uber" so they could not be considered to be self-employed.

The drivers were "in a position of subordination and dependency... such that they have little or no ability to improve their economic position through professional or entrepreneurial skill," added the ruling.

"The drivers were rightly found to be 'workers'," the judges concluded.

Uber said it respected the verdict and "will now consult with every active driver across the UK to understand the changes they want to see", according to Jamie Heywood, its manager for northern and eastern Europe.

Lower courts had ruled in 2016, 2017 and 2018 in favour of a group of 20 Uber drivers who argued they were entitled to employee status given the length of time they had been working through the Uber app, and the way that the company oversaw their work.

Uber insisted that the drivers were self-employed since they choose their own hours and place of work, and often find passengers through rival apps.

The complainants can now ask an employment tribunal for compensation, which could trigger far-reaching changes affecting all ride-hailing drivers.