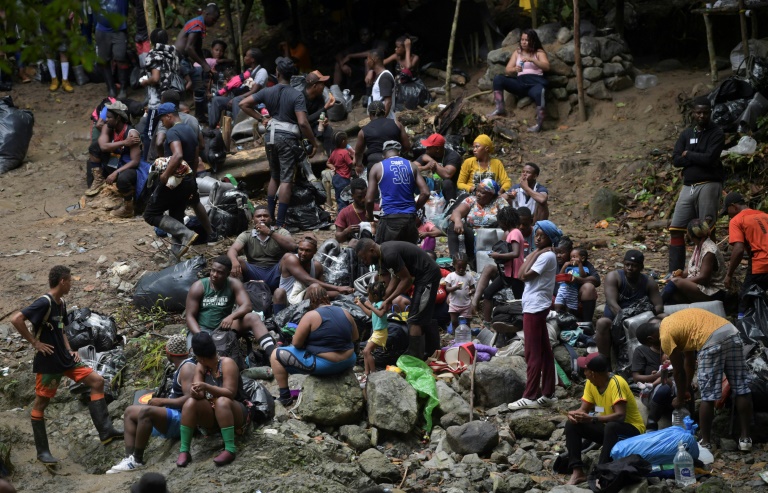 Haitian migrants rest as they cross the jungle of the Darien Gap in Colombia on their way to Panama in their quest for the United States on September 26, 2021

NEW YORK - UN Security Council powers including the United States on Monday accepted that Haiti's elections will be delayed until the second half of 2022 at the latest as the impoverished nation is hit by repeated crises.

The United States, the most influential foreign player in Haiti, had earlier pushed for elections to go ahead this year to restore democratic legitimacy amid a power vacuum.

But elections were delayed indefinitely last week after Prime Minister Ariel Henry dismissed members of the Provisional Electoral Council, which had been mired in controversy.

Addressing the Security Council, the UN secretary-general's special representative on Haiti, Helen La Lime, highlighted an agreement last month among political parties that called for a new provisional electoral council and inclusion of the diaspora.

"It also foresees the holding of elections no later than the second half of 2022," said La Lime, a veteran US diplomat.

Haiti has not had a sitting parliament for more than a year and a half amid disputes, with the country put under one-man rule by president Jovenel Moise.

Moise was assassinated in July, and Haiti was later rocked by an earthquake and tropical storm, bringing more instability to a country already ravaged by violence.

The US ambassador to the United Nations, Linda Thomas-Greenfield, did not dispute the election timeline and called on Haitian authorities to "move quickly."

"The United States supports an inclusive, Haitian-led process, charting a path to democracy through free and fair elections as soon as conditions permit," she said.

"It is crucial that Haiti's government, political parties, civil society, religious leaders, private sector and diaspora work together in the interests of the Haitian people to return to democratic governance."

Speaking to AFP after the meeting, Haitian Foreign Minister Claude Joseph said that Moise's assassination had "ruined everything" on election planning.

"The elections will take place as soon as possible but we definitely have to organize the security infrastructure," he said.

Haiti's troubles have led tens of thousands to flee, with images of horseback US border guards roughly rounding up Haitians generating outrage in the United States.

China and Russia, which frequently spar with the United States over human rights, both raised the treatment of Haitians.

"We hope that the human rights and dignity of Haitian migrants will be duly protected," said Chinese envoy Geng Shuang, who in contrast with US patience called for an urgent political transition in Haiti.

Dmitry Polyanskiy, Russia's deputy representative, said Moscow was "appalled" by the repatriation of Haitians "who cobbled together all their means to leave Haiti in search of better lives for their children."